From the Church Planter Collective

Building a Culture of Equipping Lay People
How can you empower your laypeople to serve? Kathy Rohrs shares how to equip them to lead in the ministry of the church.
Read More...

Forming Partnerships (Episode 17)
This week we sat down with Justin Bradbury to talk about the importance of forming partnerships when planting a church and ways to do so.
Read More...

The Primitive Church Plant
What can we learn from John Wesley's rediscovery of the primitive church? Matt Leroy shares what the early church could say to us now.
Read More... 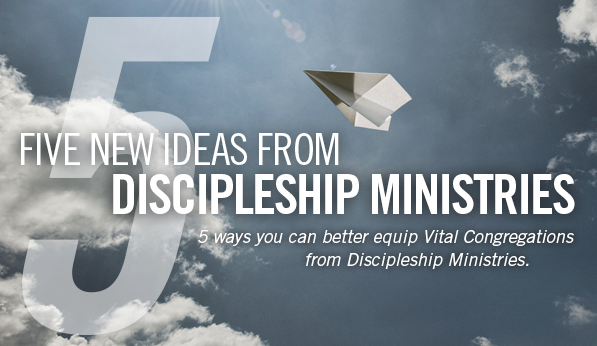 Young people express their concerns about racism. Young People's Ministries asked young United Methodist leaders who attended a gathering about racism last month this question: “What do young people need to know about racism and its impact in America?” Hear what they said by watching an online video at http://bit.ly/2b0cl31.

Looking for a study series to use with your leadership team? Dr. Elaine Heath’s new book, God Unbound, helps church leaders have meaningful conversations about culture shifts and invites us to notice where and how God is leading the church to cultivate missional wisdom during this time of uncertainty and fear. To read the introduction and a sample chapter, and to order, go to http://godunbound.upperroombooks.com.

Learn about planting intentionally multi-ethnic ministries. Join others from around the U.S. at Path1’s second Multi-ethnic Church Planting training event Nov. 2-4 in Oklahoma City for focused conversation on starting new multiethnic ministries. Trainers include Dr. Brian Leander of Adelphia University, co-pastors Cleve May and Gloria Winston-Harris of City Well UMC in Durham, N.C.; Rodrigo Cruz, pastor of The Nett Church in Lilburn, Ga.; Dr. Elaine A. Robinson, dean of Saint Paul School of Theology, and In-Yong Lee pastor at Cokesbury UMC in Charlotte. For more information and to register, go to http://bit.ly/2anRyZj.

Be still and know. My Quiet Spaces, a new online resource from The Upper Room, is where women can come together and spend time with God. Monthly themes are supported with readings, conversation starters, discussion questions, ideas for creative expression and prayers. All content is created by women for women seeking to find and create quiet moments with God. For more information, go to http://myquietspaces.org.

Rev. Junius B. Dotson shares THREE WAYS to engage unchurched people in your community during times of tragedy. This was originally broadcast LIVE on August 2nd. Fast-forward past the 5 minute preview video.

Books Available to Borrow in the CCMC Area

A Purpose under Heaven, a Novel and Study Guide and Resource by Derek V. Smith, 2008

Beginnings: An Introduction to Christian Faith by Andy Langford and Mark Ralls, 2003 (2 books)

Beyond the Box by Bill Easum and Dave Travis, 2003

Bless this Mind, Back to School Celebrations by Jerry R. Cole, 1999

Blessings and Prayers for Women: A Devotional Companion, Concordia Publishing, 2004

Blue Collar Resistance and the Politics of Jesus by Tex Sample, 2006

Churches that Make a Different: Reaching your Community with Good News by Sider, Olson, Unruh; 2002

Color Your World with Natural Church Development by Christian A. Schwarz, 2005

Dance of the Spirit: The 7 Steps of Women’s Spirituality by Maria Harris, 1989

Dancing with Dinosaurs: Ministry in a Hostile & Hurting World by William Easum, 1993 (2 books)

Destined for Salvation: God’s Promise to Save Everyone by Kalen Fristad, 2003

Destined for Salvation: God’s Promise to Save Everyone Study Guide by Kalen Fristad (2 books), 2003

Discontinuity and Hope: Radical Change and the Path to the Future by Lyle E. Schaller, 1999

Discover your Conflict Management Style by Speed B. Leas, 1997

Does God Need the Church by Gerhard Lohfink, 1999

Entering the World of the Small Church: A Guide for Leaders by Anthony G. Pappas 1988

Evangelism after Christendom: the Theology and Practice of Christian Witness by Bryan Stone, 2007

Evangelism in the Small Membership Church by Royal Speidel, 2007

Feeding the Flock: Restaurants & Churches you’d stand in Line for by Russell Chandler, 1998

Financial Meltdown in the Mainline? by Loren B. Mead, 1998

Five Challenges for the Once and Future Church by Loren B. Mead, 1996

Focus: The Real Challenges that Face the UMC by Lovett H. Weems Jr., 2011

God, Man and Religion: Readings in the Philosophy of Religion by Keith E. Yandell, 1973

Grow Your Church from the Outside by George Barna, 1973

How much is Enough? A Deeper look at Stewardship in an Age of Abundance by Catherine Malotky, 2011

How to Build a Magnetic Church by Herb Miller, 1987

Just Hospitality: God’s Welcome in a World of Difference by Letty M. Russell, 2009

Last Rights: 13 Fatal Encounters with the State’s Justice by Joseph B. Ingle, 1990

Leading Change in the Congregation by Gilbert R. Rendle, 1998

Leading the Congregation: Caring for Yourself While Serving the People by N. Shawchuck & R. Heuser, 1993

Let the Redeemed of the Lord Say So! Witnessing to Groups by H. Eddie Fox and George E. Morris, 1991

Lost in America: How you and your Church can Impact the World Next Door by Tom Clegg & Warren Bird, 2001 (2 books)

Money for your Campus Ministry, Church or Organization How to Get It by Tom Neufer Emswiler, 1981

More than Numbers, The Way Churches Grow by Loren B. Mead, 1993

Morph! The Texture of Leadership for Tomorrow’s Church by Ron Martoia, 2003

Moving Off the Map: A Field Guide to Changing the Congregation by Thomas G. Bandy, 1998

Mustard-See Churches: Ministries in Small Churches by Robert B. Coote, 1990

O For A Dozen Tongues to Sing: Music Ministry with Small Choirs by Deborah K. Cronin, 1996

Paradigm Shift in the Church: How NCD Can Transform Theological Thinking by Christian A. Schwarz, 1999

Pastoring with Passion: Ministering Effectively with Heart and Hands by Dr. David Holt, 2010

Path 1 Thanks You DVD

Quantum Spirituality A Postmodern Apologetic by Leonard I. Sweet, 1991

Reaching Out Without Dumbing Down: A Theology of Worship for Turn of Century Culture by Marva J. Dawn, 1995

Real Hope in Chicago: Incredible Story of how Gospel is Transforming Chicago by Wayne L. Gordon, 1995

Reclaiming What was Lost: Recovering Spiritual Vitality in the Mainline Church by Carlyle Fielding Steward III, 2003

Recovering the Sacred Center: Church Renewal from the Inside Out by Howard E. Friend Jr., 1998

Seeking Your Healthy Balance by Donald A. Tubesing and Nancy Loving Tubesing

Sermons in American History, Many Authors, 1971

Sharing the Search: A Theology of Christian Hospitality by Thomas R. Hawkins, 1987

Social Themes of the Christian Year: A Commentary on the Lectionary by Dieter T. Hessel, 1983

Soul Mates: Honoring the Mysteries of Love and Relationship by Thomas Moore, 1994

Spirit Gifts: One Spirit, Many Gifts by Patricia D. Brown, 1996

Telling Truth: The Foolishness of Preaching in a Real World, James Armstrong, 1977

The 3 Colors of Community by Christian Schwarz, 2012

The 3 Colors of Leadership by Christian Schwarz, 2012

The 3 Colors of Love: How to Implement in Your World by Adam Johnstone, 2008

The 3 Colors of Ministry by Christian Schwarz, 2001

The 3 Colors of Ministry: How to Implement in Your Church by Christop Schalk and Jon Haley, 2001

The 3 Colors of Your Spirituality by Christian Schwarz, 2009

The 5th Discipline: The Art & Practice of the Learning Organization by Peter M. Senge, 1990

The 7 Habits of Highly Effective People by Stephen R. Covey, 1989

The Battle for God by Karen Armstrong, 2000

The Church on the Margins: Living Christian Community by Mary R. Sawyer, 2003

The Equipping Church: Serving Together to Transform Lives, Sue Mallory, 2001

The Heart of a Great Pastor: How to Grow Strong and Thrive Wherever God has Planted You, London & Wiseman, 1994

The Hole In our Gospel: The Answer that Changed my Life, Richard Stearns, 2009

The InterVentionist by Lyle E. Schaller, 1997

The Jesus Prescription for a Healthy Life by Leonard Sweet, 1996

The Journey Is Our Home: A History of the General COSROW by Carolyn H. Oehler, 1979 (4 books)

The Other Americans: How Immigrants Renew our Country, Economy & our Values by Joel Millman, 1997

The Pastor’s Guide to Effective Ministry, Many Authors, 2002

The Prayer that Jesus Taught Us by Michael H. Crosby, 2002

The Soul of the Congregation: An Invitation to Congregational Reflection by Thomas Edward Frank, 2000

The Spirit of the Disciplines: Understanding How God Changes Lives, Dallas Willard, 1988

The Threefold Art of Experiencing God: The Liberating Power of a Trinitarian Faith by Christian Schwarz, 1999

Tomorrow’s Church: A Community of Change by John H. Westerhoff, 1976

Transforming Bible Study with Children: A Guide for Learning Together by Patricia W. Van Ness, 1991

Transforming Congregations for the Future by Loren B. Mead, 1994

Turn Around Strategies for the Small Church by Ron Crandall, 1995

Unfinished: Believing is Only the Beginning, Richard Stearns, 2013

Walking in the Same Direction: A New Way of Being Church by Jeanne Hinton, 1995

We belong to the Land: A Story of a Palestinian Israeli who Lives for Peace & Reconciliation by Elias Chacour, 2001

We’ve never done it Like This Before: 10 Creative Approaches to Same Old Church Tasks by C. Jeff Woods, 1994

What Every Teacher needs to Know About series, the GBOD, 2002

Winning on Purpose: How to Organize Congregations to Succeed in their Mission, John Edmund Kaiser, 2006

Who is the Minister’s Wife? A Search for Personal Fulfillment by Charlotte Ross, 1980

Why I am Not a Christian & Other Essays on Religion & Related Subjects by Bertrand Russell, 1957

Your Ministry Matters: From the Parking Lot to the Pulpit, Ted Brancheau Jr., 2010