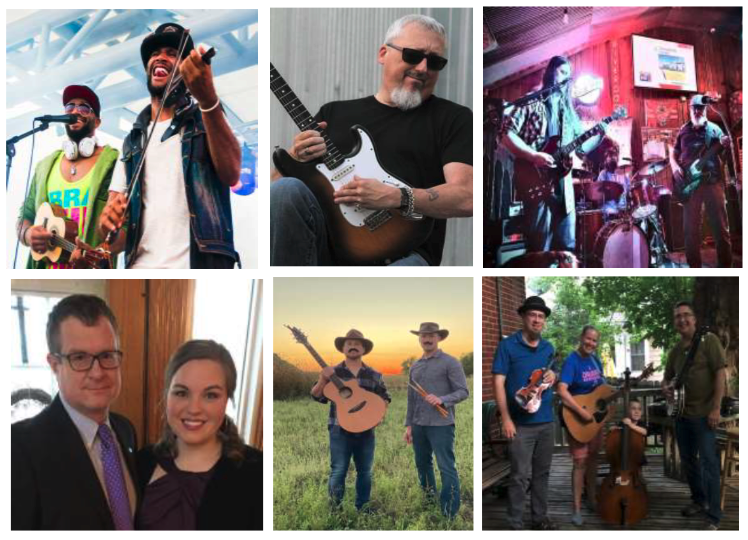 The Booneville Music Festival is back for its third year featuring six talented acts.  Performing locally, nationally and internationally, here is a little information about the musicians.

Ortonville Circus is a string band – typically playing bluegrass, but not always the traditional kind.  You might hear Gnarls Barkley’s ‘Crazy’ performed with a banjo, mandolin, guitar and bass fiddle.  They have played in the Des Moines area, and across Iowa, for several years.  If you’re looking for them, try Wednesday evenings in the summer busking (that’s playing for coins dropped in our guitar case) in downtown Des Moines (just ask the staff at Starbucks).

AND if you’re wondering how they got their name – well, it’s not a secret, but you’ll need to go to one of their shows where they’ll happily tell the story.  They sometimes find a connection between an audience member and the band name!  This is the third Booneville Music Festival for the group.  Look at their Facebook page for more details -- www.facebook.com/ortonville-circus

Straw and Sun is a two-piece acoustic cover duo based out of Waukee, IA.  Strummin' and drummin' songs from the 60's through today, the duo has played numerous gigs around the Des Moines area delighting audiences with songs new and old.  While the core group consists of Bryan and Josh, it's not uncommon for Straw and Sun to invite additional musicians to join them depending on the venue.  Bryan is the Director of Iowa United Methodist Camps & Christian.  Check out their Facebook page at www.facebook.com/strawandsun.

The Relics pay tribute to all of the power trios of the 60's & 70's like Cream, Mountain & ZZ Top.  While capturing the melodic forces like The Allman Brothers Band, Grateful Dead, and The Band.  The Relics formed in 2020 and have been working hard ever since to bring a fun atmosphere, and songs that everyone loves to sing along.  Find out more information on this Facebook page managed by band coordinator, Dustin Farrow,  www.facebook.com/workingmansdeadplaysguitar.

Bob Pace, truly a Central Iowa Blues Legend Extraordinaire, will be performing at his third Booneville Music Festivals this year!  Bob’s love for music and his enthusiastic support to other musicians radiates like no other. www.bobpacemusic.com.

Jennie and David Hargrove met in 2008 when they discovered their mutual love of music.  Jennie has been playing the fiddle since a young age.  She was encouraged and taught the art of music by her late grandfather, Lester.  Jennie has performed in multiple venues and is always a top winner at the Iowa State Fair Fiddlers’ Contest.  David, who has performed since childhood, plays guitar, mandolin, and bass.  He too has been a top winner playing guitar at the Iowa State Fair.

The Hargroves will often be seen performing in Winterset or just jamming on their front porch.  Jennie and David are a part of the Booneville Church family.  Her Mom, Rita Huntrods, is the co-chair of the Board, and her late Grandma Mary Lou Marquardt held many church leadership positions.

The South Dallas County Crew Cut Cowboy Band has been playing their style of homemade American music for over 40 years.  They are the only Iowa band to be the opening act for Jerry Lee Lewis at the Civic Center, Reba McEntire at Veterans Auditorium, plus Duane and Floppy at the Iowa State Fair -- all in the same year.  Wayne Lacox, a member of the Booneville Church, plays in the band.

The B2wins, Walter and Wagner, have been exciting audiences worldwide with their distinctive appearance and unique approach to re-creating the top hits from the past 50 years and new originals.  Exploring nearly every genre under the sun, the Twins put on a show that offers something for everyone.  Featuring a lead electric violin and ukulele, this dynamic powerhouse sets out to shatter every stereotype of a typical "band." They continue to turn heads whenever they perform, bringing a smile to faces all over the globe.  Check out their website at www.b2wins.com.