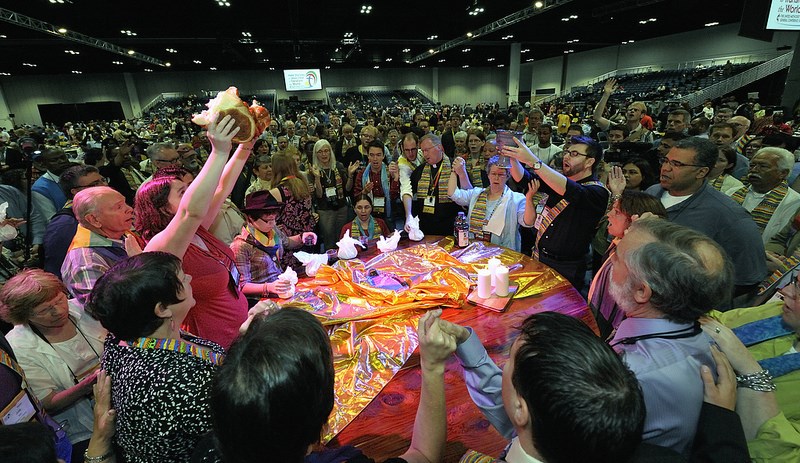 May 03, 2015
share
Portland, Ore.: The Commission on the General Conference gave the go-ahead for an alternative process of discernment for dealing with legislative petitions that may benefit from discussion in small groups.

The process would have to be voted on and approved by delegates at the 2016 General Conference in order to take effect. The Commission plans to request that this process be used for dealing with petitions regarding sexual orientation and gender identity at the 2016 General Conference, but it could also apply to other legislation at the option of the legislative body.

The Commission adopted a tentative process and authorized the executive committee to further refine the specifics of the plan, whereby General Conference delegates will have the opportunity to discuss selected legislation in small groups. The small groups will give reports of their discussions to a facilitation team of delegates, who would be elected near the start of General Conference. The facilitation team would compile the information, look for trends and directions, develop a report to the plenary and craft a petition or petitions which will then come to the plenary for consideration according to the current rules of the General Conference. The full plan will be shared once it is fully developed.

In addition, the Connectional Table requested a change in the process and rules for dealing with all legislation regarding homosexuality in small groups –instead of in legislative committees – to be discerned "through the lens of the values of centrality of mission, unity for the sake of mission, and our identity as Christians and as United Methodists."

Earlier in the week, the Commission invited representatives of Good News, MFSA, Love Prevails, Reconciling Ministries, and The Confessing Movement to participate in listening sessions so they might hear various perspectives that would help them move forward with preparations for General Conference and identify common aspirations and goals.