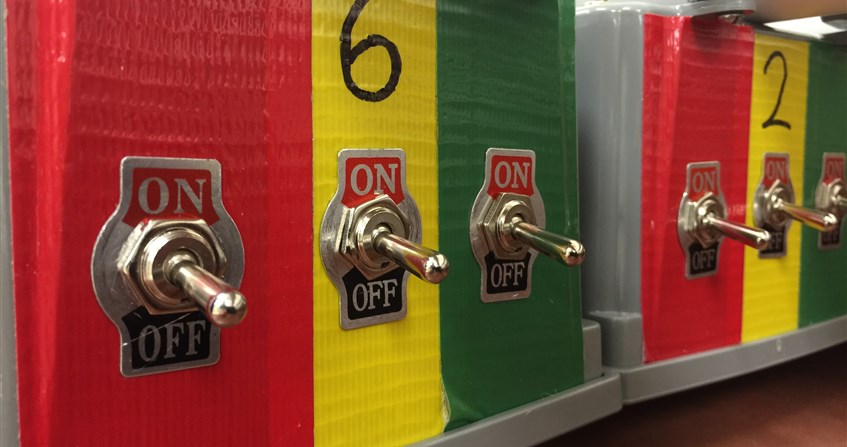 June 01, 2015
share
Attendees of the Annual Conference will be focused on many weighty matters that the church is facing. But it’s the job of people like Roland Minshall, the Conference’s Manager of Information Technology (IT), to guide many of the small but important technical details that help those gathering for the Conference to more easily do their work. One such detail is the system that has will be in place at Hy-Vee Hall for Q&A during the plenary sessions of the Conference.

Over the years, a few different systems have been used to facilitate the process wherein people in the audience stand up to pose questions. But Minshall has now developed a low-cost, low-power technology that will let the Bishop know the order that people come to the microphone and their intention – for, against, or wanting to ask a question (indicated by a switch flicked to green, red, or yellow). The sequenced display will appear on a screen at the Bishop's table. “In the past, the Bishop’s assistants have always had to scan the audience, looking for which lights came on first,” explains Minshall. “So what I’ve done this year is I have added a little radio into each and every microphone pole that will report back to the platform the position of the switch, whether it’s turned on red, green, or yellow, and will come up on a screen in sequence, so that we can track the sequence of which light on which microphone came on first.”

“New lights, as they come on, are added to the bottom of the screen,” he continues. “As lights are turned off, then they disappear off the top. That should make it very easy for whoever is watching that up on the platform to be able to see which microphones came on when.”

The system uses bright LED lights that are 12-volt, so they can be run from a battery, and the radios operate on just three volts. “I only have one that we had to actually physically wire, because of some technical requirements, but the other nine are totally wireless,” he says, adding “These radios operate on a frequency band that is outside and does not overlap with any of the wireless capabilities. So we should not be experiencing any sort of interference.” Though IT is Minshall’s specialty, he has a background in electronics from college. “I dabble in electronics stuff every once in awhile, and this was just a project that I thought needed to be done,” he says. His IT experience was critical as well. “To actually run the software for this, I was able to work with a new little gadget called a raspberry pi computer. It’s about the size of a deck of playing cards, but it runs a full Linux operating system and full programming languages, so we’re able to run a web server off of it, which is how we present the information about the lights up to the platform.”

Minshall, who devised the system on his own time, foresees that it will offer a number of benefits to Annual Conference. “I’m hoping with this that the folks up on the platform will be able to be much more responsive,” he says. “There won’t be any of this question about them not seeing whether a microphone is turned on or not.” And from the time that someone throws a switch until the time it’s noticed up on the platform will be minimal. “With our testing, it’s been two to three seconds,” he assures.

While many of those participating in Annual Conference might be happy to leave all the software, hardware, and electronic gadgetry to an expert like Minshall, they will definitely be glad to benefit from his ingenuity, since it should make the Q&A process much more efficient.

Click here to listen to the conversation with Roland Minshall