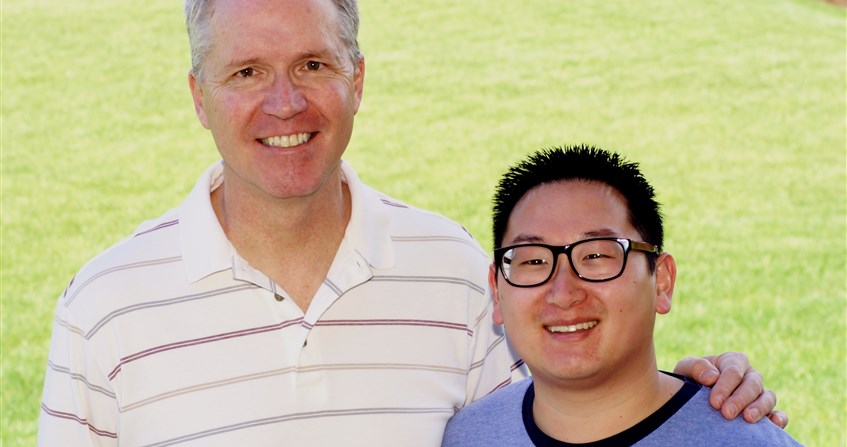 These famous words from John Wesley, the founder of the United Methodist Church, have been a clarion call for generations of people, inspiring them to go out into the world and do more. Frank Camp, clinic volunteer and board chair for Iowa Justice For Our Neighbors, is one who answered that call.

Frank, an attorney specializing in intellectual property and trademarks, is a tall man, with shoulders broad enough to take on the burdens of others, and the character to choose to do so willingly. “Those words echo my personal feelings of what you can do with your life while you are here,” he says simply.

Frank and his wife, Susan, are members of Lovely Lane United Methodist Church in Cedar Rapids, Iowa, which has supported a JFON clinic for nearly 14 years. “We’re very happy that this church is mission-oriented,” Frank says. “We’re always looking out the doors to see what we can do.” 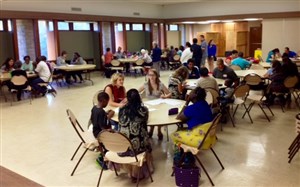 Many of JFON’s volunteers come to this ministry because of a personal immigration experience. Perhaps they were immigrants themselves. Or they are first-generation Americans who witnessed the struggles of their immigrant parents. Frank’s family has been in this country for a long time—one forefather, James Nash from England, arrived here in the late 17th century—yet Frank has his own immigrant experience, too.

In 1987, Frank and Susan adopted their son from South Korea. The ensuing mountain of paperwork, the labyrinth that was the Immigration and Naturalization Services (INS), the many unfathomable obstacles hurled in their way for no discernible reason—all of these were a revelation to Frank.

“At the time, I had already been practicing law for five years,” he remembers, “and I have a good command of the English language.” He shakes his head ruefully. “Yet I found the process amazingly difficult. I couldn’t imagine what it would be like for people with language barriers or who are unfamiliar with our government. I realized right away that without good legal help, people can fall through the cracks.”

Frank and Susan welcomed their son home. They named him James Theodore, after that long-ago English ancestor. In 2005, when James was 18 years old, the entire family, including James’ little sister, visited South Korea. They visited the hospital where their son was born and the region of South Korea his birth parents called home. “We wanted him to learn a little more about his culture and to see the process as an adult,” explains Frank. “It was a nice opportunity for him to see his roots.”

Meanwhile, back in Iowa, their home state was becoming a magnet for immigrants.  In 1990, only 1.6 percent of Iowa’s population was foreign-born. In 2013, that percentage had tripled to 4.8 percent. Today, approximately 1 in 13 Iowans are Latino or Asian, and there are approximately 40,000 undocumented immigrants living in the state.

Even though IA-JFON maintains six clinics throughout the state—more than any other JFON site—the demand for immigration legal services far outstrips the ministry’s ability to provide them. “We have requests from other cities around the state to try to open more clinics closer to them,” says Frank. “There is a need here that doesn’t have an end.”

Many of IA-JFON’s clients in the western part of the state, near the capital of Des Moines, are from Mexico or Central America. But in Eastern Iowa, where Frank lives, a large number of their clients are African. They come from the war-ravaged countries of Burundi, the Democratic Republic of Congo, Sierra Leone, and other distant places. Video footage from these countries flicker across our television sets in a seemingly endless barrage of misery, famine, disease, corruption, and violence.

These clients are seeking asylum. Often, Frank explains, the father has managed to get to the United States, but is living here alone. The mother may still be in a refugee camp, the children in another. The father comes to JFON desperate to reunite with his family. It can take years.

Refugee and asylum cases are rarely easy. Sometimes a client has previously received bad advice. Perhaps he has completed the wrong application, or made assertions that can’t be retracted. Using an attorney unfamiliar or unskilled in immigration law can hinder these cases more than they can help.

“It is heartbreaking,” Frank acknowledges. “I think about what I would do if my family was scattered and I had no money or help.” He pauses for a moment, and continues, “That’s why I am eternally grateful to our lawyers here at JFON. They really know their business.”

Frank knows his business, too. Doing all the good he can. In all the ways he can. Helping all the people he can. For as long as he can.