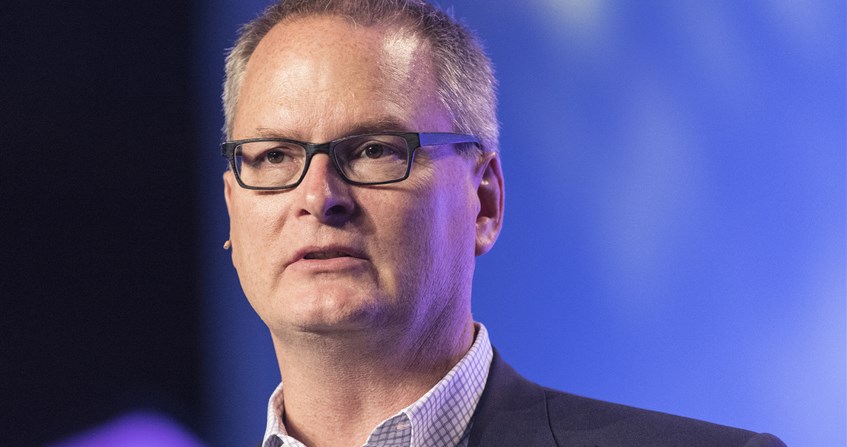 Annual Conference Session attendees were treated to a leadership revival at the Sunday night session of the Conference.

Pastor and author Adam Hamilton of the United Methodist Church of the Resurrection in Leawood, KS was invited to present his three-session program “Leading Beyond the Walls” at this year’s Conference.

“Part of what we’re in need of is a revival,” he said before embarking upon Session One.

“We have challenges in the United Methodist Church,” he said. “This is an issue for us.”

While the overall issue affects most denominations, the United Methodist Church population is aging and not being replaced, he said.

“We’ve got less than 40 years left at this rate,” said Rev. Hamilton. “We’re going to be a shadow of who we are today if we don’t change. We have to find some way to do something about it.”

What does it take, asked Rev. Hamilton, to create United Methodist Churches where young adults, middle-aged and others will say, “I don’t want to miss?”

Session One concerned effective church leadership, touching on the role of a leader, the difference between leadership and management, personal characteristics of leaders people follow and the practices of effective leaders, the importance of leading change, customer service and strategic planning.

Rev. Hamilton asked Conference Session attendees to list from their own experience the attributes of both poor leaders and good leaders.

“You’re in the people business,” he said, regarding effective leadership.

Keeping up one’s appearance is important, he continued, as is authenticity, initiating conversations and constantly encouraging people.

There’s lots of lamenting going on, even in bigger churches, said Rev. Hamilton, and it is easy to lament, but the key is to see possibilities where there are challenges.

Every leader can improve, Rev. Hamilton told the Conference.

Don’t take yourself so seriously, he said, people are drawn to leaders who can laugh at themselves.

Leaders set the tone of an organization, clarify the mission and champion the vision, and leaders are also responsible for preparing the organization for the future by leading change.

Rev. Hamilton contrasted what defines a manager from that of a leader, saying the average company in the U.S. is over managed and under-led.

Managers plan and budget, where leaders establish direction and cast vision; managers develop policies and procedures when leaders align people and resources to accomplish the vision; managers control and problem solve, at the same time leaders motivate and inspire; and managers create predictability, while leaders create chaos and change.

Leaders also evaluate and celebrate victories and honestly address shortcomings, he said, but even more, they can take criticism.

“You’re going to be criticized,” Rev. Hamilton told the crowd. “Sometimes critics are my best friends.”

He also stressed the importance of perseverance.

“The leaders who change the world are the ones who don’t give up in the face of opposition,” said Rev. Hamilton.

Key leadership principles he detailed for the crowd included a focus on people and relationships, and having a clear mission, vision and plan.

Ability to embrace change is among the principles as well.

The path less traveled, the one that makes you nervous, is going to be the one to take if you are a leader, he said, relating that in his experience, it’s always been the path that made him queasy that ended up being the he should take.

Rev. Hamilton told the story of his Kansas church gathering volunteers to work with a special needs child for a mother new to town so she could make his church their home, establishing a ministry that now draws people from 50 miles away.

Rev. Hamilton met with young clergy members after his Sunday evening address. Session Two and Three of his program for building vital United Methodist churches was scheduled for the Monday session of the Conference.