Leading Beyond the Walls—final teaching sessions by Adam Hamilton

June 08, 2015
share
The second teaching session by Adam Hamilton of the United Methodist Church of the Resurrection in Leawood, KS focused on ideas for effective worship and preaching where he asked the Iowa Conference to think about how you engage people in worship.
Rev. Hamilton started off explaining the components of “preaching that connects” and the “characteristics of effective preaching.” He suggested preparing worship that is thoughtful and well planned with intension.
Create worship that is exuberant, joyful, exciting and has a welcoming spirit, he suggested, try to include greetings that add a sense of community and reward regular attendance by having a way that makes people want to show up.
Rev. Hamilton continued, explaining how to prepare sermons that connect. “Teach people something that they didn’t know before,” he said.
He showed videos from the Church of the Resurrection as examples of worship ideas that inspire, touch hearts, and move. 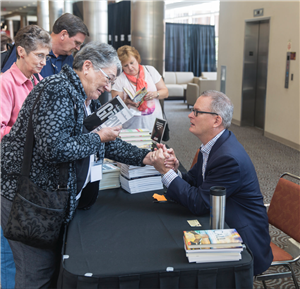 He also suggested always including a call-to-action—the “so what” of your sermon. Ask for a response to the message, he said, use interesting metaphors or illustrations and keep sermons rooted and grounded in scripture.

Adam Hamilton began session three—Mission, Evangelism and Methodist—stating that reaching people in the 21st century requires that we rethink church.

Instead of inviting people to go to the Church of the Resurrection, Hamilton invites many to join in the church’s mission first. Activities like blood drives, a 5K run benefitting AIDS relief in Africa and serving in soup kitchens are just a few things his church hosts to show what his church believes in to entice new members.

He believes that people fundamentally need Jesus Christ, and that the church needs to be intentional about inviting others into our faith. He suggests preparing the church property by keeping it clean and organized and teaching your members to be friendly to first-time visitors.

Setting a goal to find as many young people as you can to nurture to find their call in ministry is what Hamilton says is most important to the future of United Methodism in Iowa. He encouraged churches to start a scholarship fund for students in seminary.

He says if we do all of these things and we have a chance for every church to be more vibrant in it’s future than in it’s past. If we do our part generations to come will still say that they found God in a United Methodist Church in Iowa.