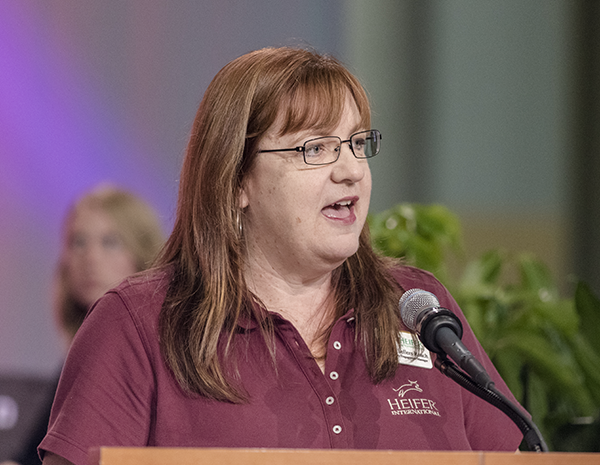 Iowa United Methodists have given more than $3 million to the efforts of Heifer International in recent years.  As of 2014 the generous support has helped thousands of families and their communities to move beyond hunger. And Cindy Sellers Roach reported that that doesn’t include donations made my your congregations directly to Heifer.

Roach, Community Engagement Manager for Iowa, joined Heifer International in 1997 as a teenager and learned quickly about the good Heifer Ranch was doing, calling it “the best kept secret in Arkansas,” the home base of the organization.  “It was family farmers acting on faith and putting their faith into action 71 years ago,” she reported, “that made the work of Heifer International possible.”  She added, “the United Methodist Church and Iowa donors have been a strong part of that legacy.”

“Individually you probably think you aren’t doing much, but together you have helped purchase gift arks for thousands of families, and through doing that they have been able to help thousands more,” Roach said.  She continued by thanking all in the Iowa Conference who have helped make this a reality and offering a prayer – “May God continue to bless us both until our work is no longer needed.”