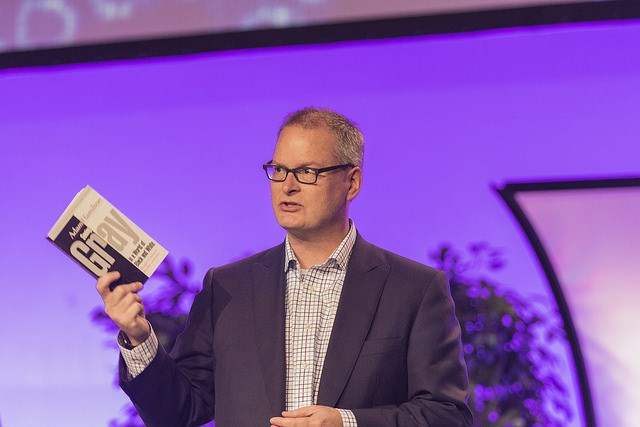 June 10, 2015
share
Adam Hamilton and Conference Director of Communications, Art McClanahan, had a conversation between his second and third teaching sessions at the 2015 Iowa Annual Conference session.

Rev. Adam Hamilton is the senior pastor of the Kansas-based Church of the Resurrection, the largest United Methodist Church in the whole country. This year he joins us here at the Iowa Annual Conference to offer a series of teaching sessions on leadership, preaching, and missional outreach to inspire Iowa’s own pastors and lay leaders. Rev. Hamilton’s visit to Iowa is actually part of an ambitious 10-year project in which he has set out to reach all of the UMC’s Annual Conferences in the U.S.

“Seven years ago we were talking about what more we can do as a church to give away what we have, to encourage and inspire and equip other churches,” explains Rev. Hamilton. “We’ve been doing the Leadership Institute and inviting people to come to our place, but we thought ‘What would happen if we took the key learnings from Leadership Institute on the road to annual conferences?”

While he had often been invited to speak about evangelism at other churches previous to this effort, Rev. Hamilton found that the people who showed up were those already interested in evangelism – meaning that many of those who could benefit most weren’t coming. But, he realized, by visiting annual conferences, he would have an opportunity to connect with virtually every UMC pastor in the nation, as well as lay people from each church.

“We’re constantly looking at what are the changes at Church of the Resurrection – improvements or things that we do differently -- that we can pass on,” says Rev. Hamilton, citing congregational care as a particular type of ministry that he’s currently advocating. “We empower lay people to be engaged in making hospital calls, assisting with funerals, all kinds of things. And that model for ministry is one that now hundreds of churches are using across the United States, and I think it’s going to be a dominant model in the years to come.”

He also emphasizes how crucial it is that the church nurtures the clergy of tomorrow. “We’ve got to do everything we can to raise up a generation of leaders,” he contends. “I’m hoping in Iowa, in the next 20 years, you all raise up hundreds of young clergy, who are not only going to go and take your existing churches and turn them around, but you need entrepreneurial young leaders who are going to start new churches in communities where they don’t exist yet, or where vital churches don’t exist.”

Rev. Hamilton also feels that it’s important that UMC leaders honor the church’s “core DNA” while also translating it for the 21st century. “We’ve got to raise up a generation of entrepreneurs who are passionate about their faith, but are serious about connecting the faith to a new generation of people, so that they’re authentically Methodist, and yet they may not look like the 1950s Methodist church or the 1970s Methodist church.”

He knows a lot about what it means to be a 21st century church. Part of the secret to Church of the Resurrection’s success has been its willingness to buck convention. For instance, in addition to their main church in Leawood, Kansas, they have three other campuses with thriving congregations, including one in downtown Kansas City that originally had about 150 attendees, but now often tops 1,000.

“[It was] a great congregation doing great ministry down there, but nobody was reaching the new loft dwellers, nobody was reaching the urban professionals living there, so we started Resurrection Downtown, and we ended up buying a bar and converting it into a church. We were the only church in Methodism that I know of that had a giant beer bottle on the side of our building for the longest time!”

These additional campuses are also unconventional in that they download Rev. Hamilton’s Saturday evening sermon from the internet and screen it during their Sunday worship services. “This is one of those new ways that you’re reaching new people that 10 years ago I would have rejected as, ‘Well how can you have church if the sermon is on video, that’s not really church!’ But the internet has become an important key for us, for non-religious and nominally religious people, they check out almost everything online.”

In fact, Resurrection Online, where they stream their “Traditions” and “Praise” services on Sunday, and then re-broadcast at different times during the week, is their most popular “campus” yet, with several thousands of people joining them online every week.

But Church of the Resurrection’s efforts are not just online, they’re very much on the ground, too. A new partnership with St. Paul School of Theology right there at the Leawood church is creating a new model for theological education that combines classroom education with hands-on learning from active clergy. And Resurrection is very invested in education initiatives for children, too, having provided reading tutors and 22,000 books last year to low-income schools.

This is a passion that the Iowa Conference also shares and is tackling through its Poverty to Opportunity Task Force, which is focusing on finding ways to combat poverty through child education. Rev. Hamilton believes that, with a strong vision, Iowa’s United Methodists can make a huge impact. “If you can articulate a vision of a concrete way that people can actually move the needle, and make their community look more like the Kingdom, people are moved by that. They are inspired. There’s a unity that comes about, they’re willing to sacrifice for that.”

He suggests that “maybe it starts with something as small as: We’re going to make sure every kid in Iowa who’s living in poverty is going to get three free books from the United Methodist Church in their community. That’s it, it starts there,” says the reverend. “Imagine if in Iowa, United Methodists were known by the people of the state of Iowa as folks who care about children in poverty?”

A vision like this, he points out, ties directly into Jesus’ own strategy for evangelism. “He said ‘Let your light so shine before others that they might see your good works and give glory to your father who is in heaven.’”

Rev. Hamilton is urging those at this Annual Conference to let their light shine so that “the state of Iowa, even individual congregations in their community, knowing what their mission is, might cast a vision that deeply impacts and influences their community and leads people to want to be a part of what they’re doing.”