Happy are those whose strength is in you, in whose heart are the highways to Zion.

You may not realize that as you go about your day, you are walking through crowds of amazing creatures. There’s probably a gym or two near your church—not the Family Life Center-type gym—but one where great battles play themselves out, every day or so, with fast attacks and charged attacks (and no, I’m not talking about church conflicts!) and raids and stardust

Some of you will know of what I speak. The world of Pokémon Go is all around us, occupying a virtual world of PokéStops, PokéCoins (with lots of reasons for in-game purchases, of course!), eggs, incubators, and more. The church I serve has a virtual gym and three PokéStops on grounds, which draws numerous cars to pause in our parking lot, and people to walk near our gazebo, looking at their phones.

I became one of those people in June, wanting to know what these people were up to and wanting to speak their language. It has been more fun—and addictive!—than I expected! The game designers are creative, often with great humor, and they work hard to engage their players. (“Trainers,” they call us. This is serious business!) 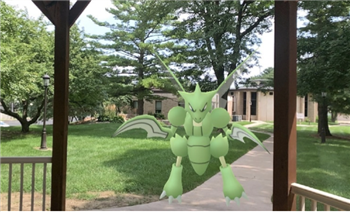 I find it rather amazing that all this can be going on in the landscape we inhabit, even if it’s only visible in the virtual space that is Pokémon Go, on my phone and many others’. Most of the world goes by, completely oblivious.

Then again, that’s true all the time, in all the places we go. There is always much more going on around us than we can take in, even when it’s in plain view. We all function within maps and geography that are much more complicated and intricate than any one of us can grasp.

I wrote once about how, for instance, walking through my hometown is a completely different experience for me than it is for my husband and son, because of the experiences I’ve had there, the history I carry with me. My husband spent a college-age summer delivering Old Home bread on a route centered in his hometown of Fort Dodge; when we drive near that part of the state, he will inevitably mention his familiarity with certain small towns because of that long-ago experience.

I have friends who have a map of quilt shops, nearby and far off, etched into their brains. Others could drive across Iowa and point out the nearest “best tenderloin” spots, or the state park that’s just down that highway. For my mom and her sisters, it was antiques; they would know where that great little store was, tucked in a garage or just off the town square, with all its treasures.

My dad, a farmer, held in his head a detailed map dotted with places like Knoxville, Humeston, Sigourney and many more locations of cattle sales, implement dealers, and individual farm sales he had frequented through the years. He could tell you the route to get almost anywhere, complete with highway numbers and landmarks.

I know someone whose mental map highlights where he can get chainsaws, of all things. For another, it’s llamas! My own includes many places connected to my genealogy. Those maps extend way past Iowa, like the scuba-diving “map” that energizes a friend of mine.

There are people whose mental map lights up—much closer to home than most of us realize, I’m afraid—with where they can get heroin, meth, or their other drugs of choice. Experts say sex trafficking happens closer to all of us than we want to know, by people we would never expect. I don’t like to think that I’m driving past places that hold that significance for people.

I’m more aware today than I used to be that the lay of the land is different for me—a white, straight, cisgender woman—than it is for people with different skin color, gender identity or gender expression, or sexual orientation. Some places are unwelcoming, or downright unsafe. (Just like there are places I will not walk alone. All us women know this.)

I was stunned last summer when I learned that persons of color in the Des Moines metro were being warned by their peers not to be out after dark because of real threats of violence against them. A help line was created; people were checking in with each other. Not people out on the streets, but residents, going about their daily business. “Seriously?!” I thought. But I’ve learned to trust the ways we become expert in the geography that matters to us. It alarms me that my siblings of color have to navigate such huge obstacles in their daily wayfinding. It should be easier; we all have a role we must play in making it easier.

As we come to the season of Advent, we’re invited to remember we inhabit a landscape that is always more than we can see. Advent invites us on a journey toward the future that God is bringing, toward paths made straight and peace become real. I wish it were as easy to see as opening up my phone and entering into the virtual Pokémon-scape. But it’s so much more than that!

What if we let those four candles of Advent be a kind of map for us? As we light the candles that guide us toward Christmas across these four weeks, what if we let the way—God’s way, future—settle more firmly into our hearts? What if the maps we carry begin to light up brightly with places of justice and truth-telling, of welcome and reconciliation? And what if we lived in such a way that those things are found most clearly right where we are?

May it be so, in all our midst.