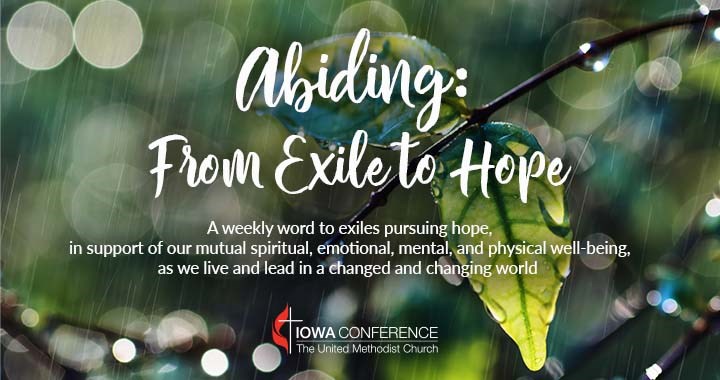 Abiding in the distant country

As Abiding in Exile moves to Abiding in Hope, I drew back to a sermon that I preached on the Prodigal Son in February 2022.  It reminded me of circumstances we sometimes find ourselves in and the question of hope.  So, I have edited my sermon for this essay in my hope that some of you reading this may resonate.

I believe it was Charles Dickens who once said that the story of the Prodigal Son was the most exquisite in all of literature. When I was reading the parable again, I could understand why he said that. There is a family, and there is trouble and there is forgiveness and there is restoration.  When you just hear the story, it takes you places in your mind. Henri Nouwen wrote a whole book on how we are all the players in the story: the prodigal, the Elder Brother and the Gracious Father.[1] Professor Amy Jill Levine says she wants to call the story, “The Absent Mother” and it does cross your mind, “where was the mother?”  There are just so many handholds in this story.  Professor Levine wants us to see it in the long line of stories about two brothers in the Bible: Cain and Abel; Issac and Ishmael; Jacob and Esau; Joseph and all his brothers.[2]

I want us to think a little bit about the Distant Country. The place where the younger son goes.  Now technically, I doubt that the distant country was really that far away from the Father’s home. I remember watching a Dateline program a couple of years ago, and the story was about people living in Marion County, Iowa.  I remember Keith Morrison, the narrator, saying something like, “the only daughter had left home and moved far away to Des Moines.”  I was sitting there thinking, “I think it’s about 30 miles.” It didn’t strike me as that far.

I was thinking about that when I was reading this story again: when the younger son went to the distant country, was it like going to a few small towns over? And since during that time a lot of people lived in small towns, and we in Iowa know a lot about small towns, wouldn’t they also have known not only where he was but what he was doing?  In my experience of living in a state of small towns, news travels fast.

So, you have to wonder about that. What did Jesus mean, the young man went to a distant country? What I believe is that Jesus is describing something that we all do sometime in the course of our lives, and maybe some of us are living there right now: we go to a place far from the home of our selves; a place far from who we really are, and people get lost and they squander all the things they know are true and good; they squander their inheritance of knowing that they are beloved children of God.

We need to recognize, if we think about it this way, that the Jewish hearers of this story would have known the basic understanding from Jewish scripture, that all the people are children of God. Jesus was trying to remind people of this deep truth that had been bruised in their lives - pushed down by the religious establishment, denied in the oppression of the Roman Empire, obvious by the way people wander off from themselves. There is just one God who has made us all Jesus was there to remind them.  And in that creative sweep of the Living God, there is an ethic of concern, an ethic of love that lives inside of us.

So, at one time or another we go off to the distant country and what that means is that we lose this sense of being home in ourselves. We feel confused and we feel far away from the things we know deep inside are right and true. And we may ask ourselves, how do I get home?

Once I was traveling through Europe. I was, actually, in a literal sense, in several distant countries from my native land.  I remember I went to visit a cathedral and it was really this magnificent place.  I asked a priest who was standing along the side of the massive sanctuary if they ever had a service in the Cathedral. And he told me that they did and the times were posted in the front narthex. So, I went back to the front and found the sign, and I saw that, in fact, a service had started just ten minutes earlier in a chapel next to the sanctuary a few feet from where I had been talking to the priest.

I realized that while I was asking the priest about the service, he must have known it was starting just then and he hadn’t even told me. I remember feeling angry about that.  I remember thinking why does anyone bother?  And I wonder, even to this day, if sometimes we in the church keep doing that to people -- not being helpful, making people feel far from home, or not welcomed, and when we do, maybe it is really because we are also living in the distant country. We cannot be the welcoming ones because we are really living far from the conviction of God’s abiding love that secures us and makes us safe harbors to those seeking.

The truth is all of us have or have had parts of our lives that smelled from the pig pens we found ourselves in. But this story is telling us that is never our final reality. In fact, those very places of life, the places where we hurt, where we mess us, where we know we are far from our true selves, in those very places we often “come to ourselves” as the story tells us, and we can head home, we can make our way back into our center, into the life of love, into the life of forgiveness and hope.  It’s not that we all have to go to the distant country to have that experience. It’s that we all will go to the distant country. Every last one of us.  And this parable is the map we need on how to come home. And I believe the church at its best is ready to hand out the map, is ready to hold a hand that needs holding in order to find the courage to be.

I do love the image of the waiting father who is watching the road for his son to come home. I do imagine God is like that.  I follow a poet, Rosemerry Wahtola Tommer, who lost her son. Her poem “I want to Listen to the Absences” reminds me so much of how God must feel about us when we have wandered away into the Distant Country:

I want to listen to your absence
the way I listen to the night—
the way the dark somehow
invites a deeper listening.

I want to hear, for instance,
the way silence fills in
where your voice has been,
or the way the room seems to know itself
by the pound of missing footsteps,
and in this way, I find you
where I cannot find you.

I am thinking of how the night opens up
between the calls of the owl
and how I listen in that interval
not only with my ears, but with my skin.
I want to listen for you with my lungs—
as if every breath is attentive
to the syllables of grief, of love.

If I have hope within the exile of our times and in the journey out of exile, it is this: that God is with us. That God thinks about us and longs for our return from the Distant Country.  That God does not move ahead without us, and so, together, as persons and as a community – as the United Methodist Church in Iowa – we must let nothing deter us from moving forward in love, justice, prayer, invitation and service as that is how the energy of God sweeps across our minds and renews us. That is how we come home. Each of us. All of us.