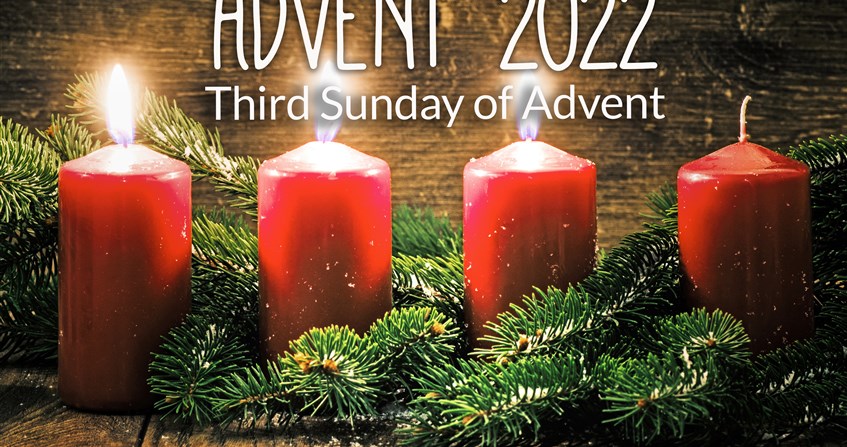 Mary’s Magnificat, her hymn of praise, is one of the original eight hymns of the ancient Christian church. It has been foundational for Christian worship for centuries: meant to be sung or prayed every day, working its way into the spirit and down into the very bones of disciples as the very essence of the kind of work that God is up to. It is the longest speech any woman has in the New Testament. It is magnificent. It should be the song I’ve had stuck in my head all week, and maybe, as a Christian, for my whole life.

But, alas. I’ve got that other, theologically problematic but emotionally moving and earwormy tune running through my mind: Mary Did You Know? I suppose it could be worse: I could have the Old Spice Jingle on repeat in my ears this week.

I have been pondering the regular absence of Mary’s Hymn, meant to be regularly sung every day, in our United Methodist pattern of worship – maybe it’s fallen out of fashion or favor (a strange thing to happen to the woman whom God looked upon with favor, am I right?) Maybe we just need a tune that can hold its own in our minds. But I feel the loss, and I feel the cultural pull to replace Mary’s own words with the catchier Mary Did You Know, which I will say does a most excellent job of describing the powerful world-turning upside down, restorative and redemptive work and life of Jesus.

But it erases the very conception of God’s incarnate reversals through the birth of Jesus: choosing a young woman with no power, privilege, or status to be a co-creator of the Messiah. Allowing a young woman the choice of saying “yes” to being a partner in God’s redemptive work.

In her very own body, God has already demonstrated how God exalts the lowly. In her very own life, which will now take a completely different trajectory than she ever anticipated as the ordinary wife of Joseph, with their ordinary kids and their ordinary carpentry business, God has demonstrated the kind of favor and power that will be available to the lowest of the low in society.

Mary’s very self and soul, which the angel says will be “overshadowed and overcome” by the power of the most high to make the conception of the Messiah possible isn’t permanently erased by this over-shadowing. After her “yes” to God’s proposal, she immediately hurries to Elizabeth her cousin in the highlands and the first words she says after the “yes” are “My soul magnifies the Lord.”

My soul makes God’s work clearer for all to see. I think she could have every right to add, “you can already see it happening in me!”

The fact that Mary actually did know and began to testify – to witness— to that work that God would be doing through her “yes,” through her own changing flesh and bone body, through her mothering and nurturing the Messiah is in itself revealing the subversive and redemptive work of God.

Mary and Elizabeth—two women who weren’t considered citizens enough under the Roman Empire to even testify in their own defense at court—are the first to give voice and testimony to the fact that Messiah is finally coming; that God hadn’t forgotten the promises made to Abraham; that now is the time for God’s rightness, God’s will, God’s kingdom, God’s mercy to be restored in a place of so much injustice, oppression, hurt, hunger, abuse to make a real difference in real lives.

From the very first days of Jesus’ conception in the world, in an actual, factual, practical way, God is already doing what God has promised: raising up those with no voice, giving power to the powerless and bringing uncontainable joy.
I can only imagine the way these mothers taught John and Jesus about their own experiences of God’s work. My soul magnifies the Lord.

How they transmitted this expectation that God will and does actually do something for the people to their boys. My soul magnifies the Lord.

Elizabeth, teaching John by her own first prophesy, a little something about proclaiming the way of the Lord. My soul magnifies the Lord.

Mary urging Jesus to perform his first miracle, launching his official ministry, even before he thought it was the time and place. My soul magnifies the Lord.

Jesus at Gethsemane living into Mary’s first example: “Let it be with me, according to your will.” My soul magnifies the Lord.

There, at the cross, until the very last tortured breath of the child of her body; the child of her “yes;” the Messiah of her heart who turns expectations upside down. My soul magnifies the Lord.

Likely there, at the tomb, three days later with the other women who loved Jesus, to do the women’s work of tending to the bodies of the dead, discovering he wasn’t there. Hearing again from an angel, words that would change the trajectory of the entire world, “he has been raised.” My soul magnifies the Lord.

Mary totally knew. And she was all in, for all of it.

Prayer: This season, may we recapture Mary’s Hymn; may we marvel again at Mary’s embodiment of God’s work in the world; may we follow her example of working with the God who is turning the world upside down. May our souls magnify the Lord, to make God’s work clearer for all to see through our own lives. Amen.