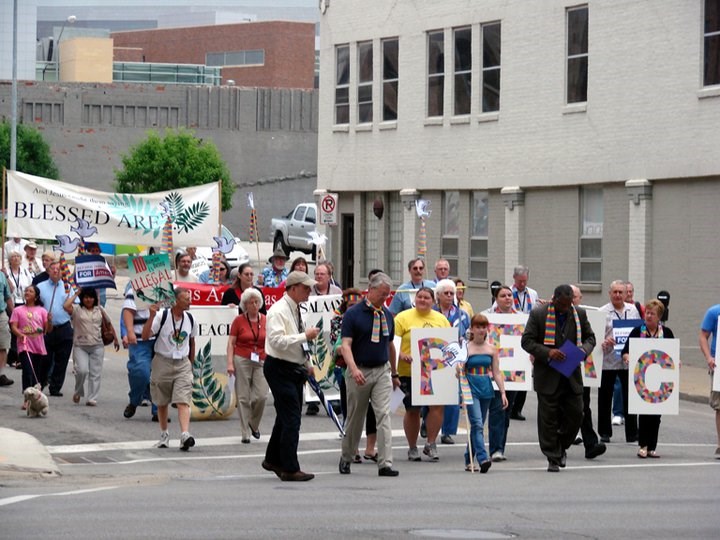 August 11, 2015
share
Rev. Chet Guinn received The Ball Award from the Methodist Federation for Social Action at Gather at the River on August 7, 2015 in San Antonio, TX. The award is named after Lee and Mae Ball who were never content to remain within the walls of a Church building because they knew they could only find Jesus in the company of the poor and oppressed. They engaged those who were "spiritual, but not religious" long before the Church had words to describe such a belief. And so today, the Methodist Federation for Social Action recognizes those individuals who have that same Spirit for peace with justice, for being the Church beyond the walls, and lifting up the best practices of the Methodist Federation for Social Action. Noting the importance of an independent advocate for social change in the Church, Lee and Mae led MFSA by knocking on parsonage doors, participating in civil rights protests, corresponding with prison inmates, and publishing a newsletter, the Social Questions Bulletin (SQB). All of this laid the groundwork to help the Federation become stronger for years ahead. 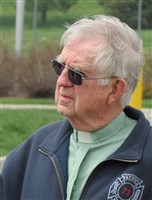 In making the presentation the MFSA awards committee said of Chet Guinn, “This year's recipient has been a life-long advocate for justice and peace, through the church and in the community. In the mid 60s he was one of the pastors named by the National Council of Churches to go to Mississippi to help with the freedom schools and voter registration. He was an early protester against the Vietnam war, and has demonstrated against the B1 bomber, nuclear weapons, war in general, the coming of a drone base to Des Moines and on many other peace issues, and has been arrested several times for his witness. He worked with Rabbi Jay Goldberg and Roman Catholic Bishop Maurice Dingman to create a Peace Garden in the premier park in downtown Des Moines. More recently he was the driving force to be sure that Peace Garden was remembered and restored as the city did a major remodel of that park.”   Chet was the first president of the Iowa MFSA Chapter, which began in 1976. For the past 20 or more years he has served as the Chapter's Peace and Justice Advocate. In that capacity, he has written op-eds, letters to the editor, and articles for the Iowa MFSA SQB many times, speaking out on issues of concern to MFSA. He helped establish the March for Peace and Social Justice, which has been held during Annual conference in recent years.  Chet has signed both the Do No Harm Covenant and the Covenant of Conscience indicating his support of LGBTQ persons, and in recent years has driven his antique fire engine in the Pride Parade for one of the local Reconciling Congregations.    Each year he hosts the MFSA caucuses held during Annual Conference. He continues to challenge and inspire members of our chapter to work tirelessly for God's justice, peace and reconciliation.

The award presentation concluded by saying, “Thank you, Chet Guinn, for all you do to make the city of Des Moines, the state of Iowa, and the United Methodist Church a place where peace with justice is central to the minds of all people.”