Beans to Mission: An Uplifting story 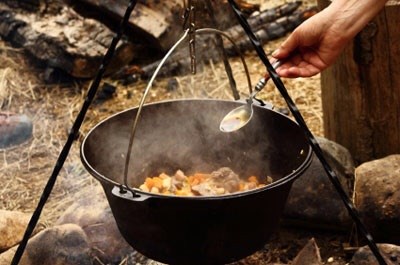 From beans to mission: the story of an extroverted church

Evangelism can come in many different forms – some of them quite surprising. For Grand View United Methodist Church in Dubuque, one of those unusual methods of evangelism is in the form of a bratwurst booth at the Dubuque County Fair. “We think that Jesus may not run the brat booth, but he would probably hang out there with the people,” says Reverend Tom Shinkle. “The Brat Haus that we run is not a money-making operation. We’re in the relationship business, as Jesus’s people. So we’re there to be part of the community.”

Grand View has been able to reach out to many locals at the popular county fair, but the congregation is now poised to get a little more notoriety due to a special recipe of Tom’s that is soon to be featured on Food Network’s Carnival Eats show later this year and is already known to visitors at the Brat Haus. “I decided to serve what my members call ‘Reverend Tom’s Cowboy Beans,’ this kind of fun, elaborate recipe, primarily as something to do with our leftover bratwurst at the end of the night.”

“It starts with about a pound and a half of bacon, and that gets cooked with onions and green peppers and lots of fresh garlic,” reveals Rev. Shinkle. “Then more meat goes in, whatever meat’s available: bratwurst, Polish sausage, grilled hamburgers. All of that’s cut up and cooked in there for awhile with more spices – black pepper, cayenne pepper. Then the beans go in, with some brown sugar and a little bit of barbecue sauce. Then I have everybody around taste them to get the flavor just right.” A couple hours in the smoker with some Applewood smoking chips later, and the beans are ready to go.

“This really started, literally, around the campfire, when I’d be camping with my family and different church members,” explains Rev. Shinkle. “In a cast iron kettle, I would cook these beans over the campfire.” That’s also how the beans got their name, as this tradition conjured up an image of an infamous scene from the Mel Brooks western Blazing Saddles where a group of cowboys are eating beans around the fire, with comedic results. “It’s kind of an uplifting scene,” jokes Rev. Shinkle.

Being a Part of the Community

What Grand View is doing, though, is about a lot more than introducing people to a delicious recipe. “This is a big community event for the county of Dubuque, and we want to simply be present and be positive,” says Rev. Shinkle. “We’ve made friends with people, people I may never ever see in the church building, but that’s okay. We’re very much a part of the fair now, and that’s why we’re there.”

And the county fair is only one part of Grand View’s outreach efforts. They also have a food booth at the Dubuque Dragon Boat Festival, they recently hosted a tractor pull, and they have many members out serving food to the homeless regularly, to name just a few things.

“I believe it starts with that simple presence, being a non-judgmental presence, and being friendly people. But also being clear that we’re a church,” he emphasizes. “We’re doing what we do because of our relationship with God through Jesus Christ and our relationship with the Christian community. We don’t preach that, but we try to make that clear.”

Getting to Know the Neighbors

Does the reverend have any suggestions for other churches that would like to follow Grand View’s model? “Start small,” advises Rev. Shinkle. “In many of our rural communities, the county fair is a very good example. Every county has one. Get a spot, set up a table, have some of your church folks out there, just to be there. Little things like that. When I was in Union County, I sponsored demolition derby cars and would paint a big cross and flame on a demolition derby car, just as a way to say ‘We’re here.’”

He also suggests block parties. “Have the church put on a potluck or grill some hotdogs and hamburgers, and invite the neighbors to come in. They don’t have to bring anything, and they don’t have to join the church. Just say, ‘Hey come, it’s a block party, we need to know our neighbors here.’ That’s where you begin, and people see how much fun it is, and how meaningful that can be,” Rev. Shinkle explains. “That, I think, begins to open those doors and take down the barriers. It makes it easy for people who may be unchurched.”

Even if those people don’t return to the church for worship services, they realize that it’s there for them when they need it. “In times of crisis or tragedy, I’ve certainly experienced that people will suddenly find that need for God, and need some kind of spiritual lift or boost or answer,” says Rev. Shinkle. With the barriers down, people know they can come to the church as they are. “We’re not going to judge you, we’re not going to make you do a formula, like ‘Okay you’ve gotta do these three things and then you’re saved.’ We don’t do that. We say ‘Come in.’”

Outreach is an intrinsic part of the culture at Grand View UMC. “We’re created to serve, not to be served,” Rev. Shinkle believes, noting that everyone has a role to play at Grand View. “Everybody is expected to serve according to their gifts and their passions and their abilities and their availability.”

Rev. Shinkle feels strongly that Grand View’s efforts to engage with their community make the church healthier. It also keeps them busy enough that their members don’t have any time to navel-gaze or fret about the little problems that plague some churches. “We’ve got too many other things to worry about, like ‘Are we gonna run out of bratwurst?” laughs the reverend.

Many other churches might find themselves with “problems” just like that, if they decide to take Grand View’s lead. The Iowa State Fair begins this week, providing another opening for reaching out to the community.

Summing up Grand View UMC’s philosophy, Rev. Shinkle says, “Preaching takes place four times a week there, but otherwise we’re not out preaching with words. We’re trying to do it with our actions.”