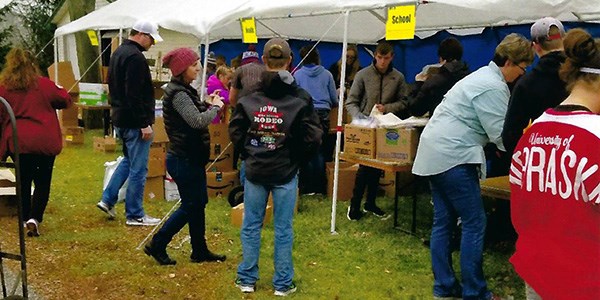 January 02, 2018
share
Just a month after another successful Thanksgiving Ingathering for Iowa United Methodists, the Ingathering’s state coordinator, Mary Davis, sat down along with treasurer Marilyn Jensen and Greenfield site co-chair Jim Tussey to talk about the event. 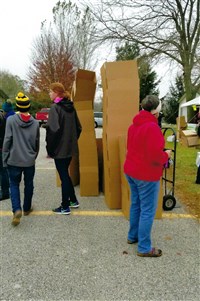 Marilyn reported that donations this year amounted to “about $985,000 dollars’ worth of both cash and in-kind gifts. Which, the in-kind is kits that are donated. So just short of a million dollars’ worth of giving for Thanksgiving Ingathering. And this has been about the same for a number of years, in that one million dollar range,” she added.

Marilyn has been the treasurer at the Greenfield site for 33 years. “When Ingathering started in southwest Iowa, it was started at the Greenfield United Methodist Church. Part of that was because our church is handicapped accessible and has adequate space,” she explained. Reverend Bill Olmsted asked her to be the treasurer, and she accepted.

“What was interesting at that point was when we actually received animals and we actually put ducks or sheep in the back of a van and took them to Heifer Project in Arkansas. Since then of course it’s evolved,” she said. “Sometimes there will be more money, more cash, and maybe a few less kits. Sometimes it’s reversed. Sometimes we have emphasized, say, perhaps Church World Service blankets. Sometimes the school kits. People really, really like to give school kits.”

Whatever changes from year to year, her involvement has been a constant. “I guess I’m a numbers person and a bookkeeper type person, and I still enjoy this task.” She’s also happy to have the assistance of office staff to help with tabulating all the gifts and the many kits. 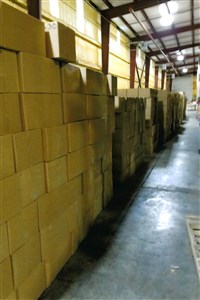 Mary revealed that they received over 60,000 pounds of kits this year. She enjoyed checking out the donation activity at the Greenfield site before heading down south this year. “The best part for us was to meet the two semis in Baldwin, Louisiana and to help unload. We had a lot of help down there from other states, and we had a lot of interstate fun, ribbing each other, of course. I think this is the most boxes we have ever had for UMCOR,” she said, noting a total of 3,500 boxes.

Wearing a green safety vest with his name emblazoned on it, Jim was the go-to guy at Greenfield during the Ingathering. “I assisted out there and wherever I could, and ran errands. We just had an outstanding activity out there this year, with 75 youth and 20 adult leaders, and they were all involved. With that many, we could run them in shifts. They could work, go in and rest, warm up, and come back out and work again—just like a beehive of human beings. Everyone was very active.”

Jim made it into the county paper with an image of him on a P.E.T. (Personal Energy Transport) machine, as he was riding it over to load it on a truck. P.E.T. is one of the organizations supported by Ingathering, and their hand-cranked personal transports, designed for people with damaged lower limbs, can be transformative. “When this machine goes to countries where people are in need of transportation, they even develop ways to become productive citizens, selling jugs of water, or setting up a shoe-shine box in the back,” he explained. “So it is a machine that is benefitting people worldwide.”

Mary, who has been involved in the “worthwhile project” of Ingathering since back when it was only at Mt. Pleasant, had some extra good news to announce about the funds this year. “Out of this money that we’ve collected this year, the task force today decided that we have food pantries in each of our eight districts, and we’re going to give back about $50,000 that we have that is undesignated giving—each district is getting $6,250,” she reported. “Each district is going to get that much money to give to the food pantries, which is very much needed.”

Mary, Jim, and Marilyn all find Ingathering, which is all about serving those in need, to be a rich experience that brings them back again and again. “I’m hooked,” said Jim. “I’m involved. I just get a good feeling about what happens with the whole Ingathering process, and how it benefits and helps people and lets them know that there is a higher power interested in their life and interested in improving their opportunities in life.”
To those who have not yet gotten involved, but might be considering it, Jim suggested that they “think about what they themselves possess, both materially and faithfully, and look around them. Even in their own area, in their own communities, the state, the United States, and across the whole world—how can they help other people to achieve that same level of success and goodwill? And come away at the end of each day with a wholesome feeling for themselves, their family, and all their friends and associates.”

Marilyn put it simply: “People like to help others, and they like to do for others. There are people that just love to sew the school bags. There are people that like to go and purchase the school supplies and give to children. People ask about the blankets; they want to give blankets, and we know they go to the homeless. Within the last year or so, we’ve had hurricanes, we’ve had floods, we’ve had fires. There really is a need, and people do like to step up and help others.”

Mary assured that “you’re going to get more out of it than the people that you help. You’ll just end up feeling better about yourself,” she said. “By working with this organization, you’re seeing the broader picture and you feel part of something bigger than your small area. And it’s a rewarding day when you get done. You’re tired, but it’s just a rewarding day. And you get to meet new people!”

She continued. “The Methodist church is a connectional church, and I think it makes us more connected. We’re not in our own individual little groups, we’ve gone out, which is what Jesus has asked us to do.”