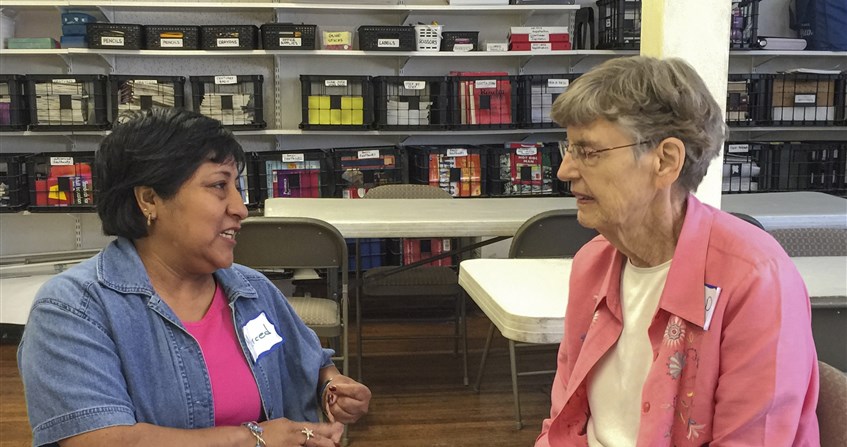 “I started to learn English when I came to this country,” says Merced Cruz. “But then after I have my children, I couldn’t go anyplace because no one provided childcare. This church was the first place that offered that, so that was magnificent for me.”

Merced was one of a few people who participated in the ESL (English as a Second Language) program at Trinity United Methodist Church in Des Moines back when it first began. But for various reasons, the others gradually dropped out until it was just Merced – and her teacher, Doris Knight.

“Sometimes I got so tired from my job, because I just had time to go home, pick up my children, make dinner for them, eat, and come here,” explains Merced. “So sometimes I’d feel like ‘Oh my God, I don’t want to go anywhere now.’ But I thought, ‘No, Doris is there for me.’”

Doris Knight concedes that she knew a little bit of Spanish, but that’s not really why she began teaching in the program. “I just love the people. I was just attracted to the people. It was a wonderful opportunity to visit with them and to get acquainted with them, and get to know them.”

An ELL Success Story Is Born

But what was once a class that consisted of just two committed people has blossomed into a thriving community program years later. Today, Trinity has an ELL (English Language Learner) program that involves some 200 people.

Wendy Vazquez, who served as the program’s coordinator from 2009 until 2014, helped build it into what it is today. “Trinity is a small church that is doing a huge amount of things. So when I came in, I knew that I was going to need to pick up a job,” she laughs. “They needed a director of their ELL program or a teacher. I said, ‘Well I can’t teach, so I’ll be the coordinator then.’ I had no experience in it and no idea how to do it. But I loved it that my church would have the faith that God would give me what I needed to do the job, and that’s what happened.”

Although she admits to being “as disorganized as it gets,” Wendy’s love and concern for everyone involved in the program is what made her a successful coordinator. “People can feel that I really care, and that I care about justice for them, I care about their issues. I think that helped create a sense of community among our students, which is one of the main things that they really need to feel that people in our community, in the United States, care about them when they are rejected by so many other people.”

A far cry from the dedicated twosome of the program’s earliest incarnation, if you walk into Trinity’s Basic ELL classroom today, you will find about 25 students hard at work. “There would be some who could not write, but they were there because they were determined that they were going to learn something, just by being here,” reports Wendy, describing a typical day in the Basic class when she served as coordinator. “There would be others who were helping the students who were very, very new. There would be a lot of volunteers walking around trying to see who was struggling the most.”

In this class, students focus on common conversational phrases, vocabulary, and practical knowledge. “They need to learn the basics of money, of directions, of what kind of store sells what. All that kind of stuff,” says Wendy. “The other classrooms are a lot smaller. Most of those students have been with us for several years and know our program and know our teachers, and they’re here just as much for the community that has built up over the years as for anything else.”

“There’s a want and a need and a love for this program. People are just excited for it to keep going,” observes Veronica Stafford, a new teacher who has been with the program for a month now. “I think some of the teachers have been here six, seven years – every year, consistently.”

Veronica just took part in a new teacher training orientation to help her get better acclimated to Trinity’s ELL world. “It was a mix of really experienced teachers, brand new people, and one former student who came to teach for the very first time and was very excited to get involved. People have a lot of knowledge and experience to share.”

Wendy emphasizes that some of the most meaningful things the ELL teachers do is help integrate the students into the community. “One teacher took her students on the bus, so that they could learn how to use the bus. Because a lot of our students do not have a driver’s license,” she says. “Another member of our community works at the library, so he would always take our students over to the library and show them the ELL resources.”

“It’s all of the interactions outside of the classrooms that are so important,” Veronica confirms. “It’s getting to make friends within class and see them outside and afterwards, and getting to know the teachers and interact with some real Iowans and Americans – and practice English on the side.”

Some teachers even bring the students home to enjoy dinner together. “They have meals where all the different people bring food, so then they can share with each other what kind of foods they have in their country.” There are now ELL students from multiple countries in the program. When Wendy first began, most students were Hispanic immigrants. But she notes that many of the newer students are people in the neighborhood who come from various Asian and African countries.

Oftentimes immigrants in particular, being new to the community, are reluctant to be apart from their children. That’s why Trinity works to make the ELL evenings feel like a true family affair. Offering free childcare is critical to this.

“We have always really tried to make it a very positive experience for entire families,” says Wendy. “This is a place where they know they’re going to be cared for very well, and they’re going to be getting a positive and loving environment. So we have a lot of families.”

To provide that environment, finding plenty of volunteers is necessary. “Being there for people doesn’t really take very much. All it really takes is showing up,” she asserts. “If we have a room full with 15 babies, you can’t have too many adults there with them.” She also points out that, “It doesn’t matter the age either. And it doesn’t matter if they speak English.”

Trinity UMC’s flourishing ELL program demonstrates that it only takes a couple devoted teachers and students to build a community. It’s a model that other churches should consider trying, especially if they have a significant immigrant population. The people of Trinity can attest that such a program can be life-changing for all involved.

Whether volunteer or coordinator or teacher or student, everyone who has participated in Trinity’s ELL program has gotten something out of it. “I have a brand new community that I’m a part of,” enthuses Veronica. “All these new friends and co-workers and co-teachers that I can say that I know and will know for a long time I hope.”

“I didn’t have friends,” says Merced of life before Trinity. “But after coming here, I met people and made friends. And I feel the love when I came to the church, even for ESL. The people, the teachers, the volunteers, you feel like they liked to do that for us.”

“Nothing has been so meaningful to me, in my life, as my time with the ELL program,” declares Wendy. “Seriously. And I’m not the only person who’s said that.”