Celebrate 36 years of giving at the Thanksgiving Ingathering 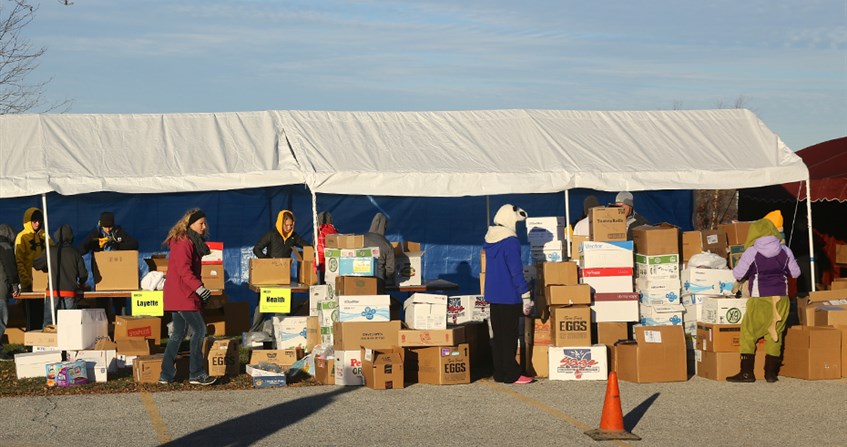 On November 7th Iowa celebrates the 36th year of the Thanksgiving Ingathering. What began as a casual conversation between Art Richardson and Bill Applegate about why there was so much hunger and poverty around the world while many were living in luxury, has resulted in millions of dollars in cash and in-kind gifts given by the people of the United Methodist Church of Iowa.

From that conversation over 35 years ago, a committee was chosen to plan a day giving people the opportunity to share their abundance. It was named the Bishop’s Ingathering.

The first Ingathering was held on November 1, 1980, on the campus at Westmar College in LeMars, Iowa with people bringing blankets, kits, animals, and corn.  More than 300 clergy and laity attended the first event and they raised $44,882 in gifts that supported the Church World Service, Heifer Project International, Self-Help Tractor, United Methodist Committee on Relief, Iowa Hunger Task Force, and Goodwill Industries.

Bishop Wayne K. Clymer and then Conference Lay Leader Don Ridenour, shared in the day’s activities at the first celebration. They were pleased how all members of the Iowa’s United Methodist Church could be involved and it was decided to plan a similar event the following year. By 1982, more sites were added and it was renamed the Thanksgiving Ingathering.

Soon craft items, bake sales and quilt auctions were added so participants could purchase items during the day.  Guest speakers, and missionaries were invited to inform people of the mission work of the United Methodist Church. The Ingathering celebration continues today to be filled with loading, unloading, sorting and tallying. Iowa’s United Methodist youth participants have been an invaluable help every year unloading the donations, sorting and reloading them again.

Bishop Job expressed it so well by saying, “Even today the mighty voice of God cries out. Unbind him and set him free.”

Those words continue to be true each year as people bring their gifts and share in worship and praise. The stories are heart-warming to hear—when the sea container arrives in Nigeria, the school kit is received by a child in another part of the world and families are helped after their possessions have been wash away by a flood.

This year the goal is to increase giving and raise $1.6 million dollars in cash and in-kind gifts to support projects very similar to the first year—including the United Methodist Committee on Relief, Church World Service, Self-Help International, and the Heifer Project International

From the Thanksgiving Ingathering Iowa Coordinators/Chairs
Gaylen and I became involved with missions over 30 years ago. As our children grew older and started their own lives, we felt we could give more of our time and that is when we became active in the Thanksgiving Ingathering 17 years ago. We have felt so blessed by the opportunity to play an important role in this mission. It has become a passion of ours and as we step down as Coordinators/Chairs after this year, we will remain active at the Northwest/Cherokee site.

Knowing how many lives all over the world are touched by the Thanksgiving Ingathering is very humbling to us and encourages us to continue to be the hands and feet of Jesus in any way we can.

Matthew 25:40 says it well: Jesus says, “I tell you the truth, whatever you did for one of the least of these brothers and sisters of mine, you did for me.” Also, 1 John 3: “How does God’s love abide in anyone who has the world’s goods and sees a brother
or sister in need and yet refuses help? Little children, let us love, not in word
or speech, but in truth and action.”

Saturday, November 7th, will be a busy but very exciting day, filled with God’s blessings for all the effort put into it and bountiful blessings for the people around the world who will receive it. Our hope is for others to get involved in this important mission, Thanksgiving Ingathering, and share the love of God in truth and action!