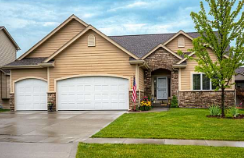 October 09, 2015
share
The Iowa Conference has a new residence for its resident bishop and family.  Located in Clive, the home is in one of Iowa's fastest-growing counties, one with significantly increasing diversity.

The Clive episcopal residence meets all guidelines and standards, as set by the General Council on Finance and Administration as well as the North Central Jurisdiction (NCJ) of The United Methodist Church.  The house is also comparable to other episcopal residences across the NCJ.

The Conference's Board of Trustees moved to acquire a replacement residence for the episcopal family because, within the past year, there have been three flooding incidents, and a total of five since the house was constructed. With multiple causes of flooding the Trustees had been considering a transition from the Norwalk residence next year. With the urgency attending to the water damage of personal and Conference property and, even more importantly, health concerns, the timetable was moved up.

In addition to the water damage, financial considerations have been moving the Trustees to consider a relocation. The purchase price for the new Clive residence was $248,000 less than what the former Norwalk residence cost.  The Conference will not incur any indebtedness as a result of the change.

The new episcopal residence "will position us well for future episcopal families as well as being cognizant of financial realities" said Conference Treasurer Terry Montgomery.

Hawkeye Movers have handled the relocation for the Trimble’s.  Hawkeye has also been responsible for clergy family moves for several years.  "They continue to care for us in a very professional manner," Montgomery noted, "and the move should be completed within the next week so that they comfortably settled in."