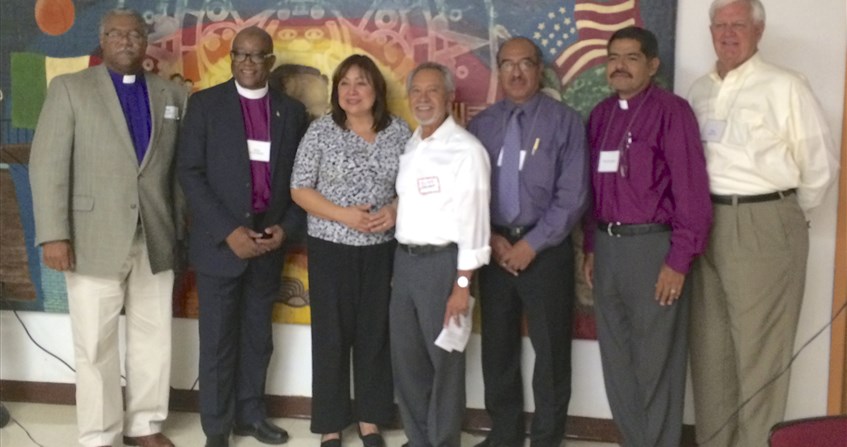 A joint meeting of Methodist border Mission Network and United Methodist immigration Task began as we gathered at the Lydia Patterson Institute in El Paso.

Have you heard of high schools with 95 percent graduation rate or a school where 97 percent of the students are accepted into college? This college prep high school, which has expanded to include 7th and 8th grades, was founded over 100 years ago by a Methodist lay woman who saw the need for education of Mexican children in the border communities of El Paso and Juarez Mexico.

Many of the students go on to college, seminary, or other graduate programs.

When people ask me why I am a United Methodist I point to examples like Lydia Patterson Institute.    All students are on partial or full scholarships and most of the students work at the school to help support their own education and school.

Sixty percent of students cross the bridge from Mexico to attend school and return home after school. These are American-born students living with their families in Mexico.

We visited the Houchen Community Center located in Segundo Barrio of El Paso. This Center was established by United Methodist Women and owned by the Women's Division. It serves hundreds of families through the Rev. Guy Jones food pantry. It houses a Senior Center, community library, thrift shop and sports program for youth.

At the time of our visit 49 children were part of the child care program and many more involved in the ongoing child development activities, which are open to the children of the community. Dozens of volunteers are utilized with a few paid staff to engage the community in their mission of " Making God's love a reality in Segundo Barrio and nearby neighbourhoods through working to meet the physical, educational, spiritual, and social needs of children, teens and adults."

Thank God for the many centers and mission initiatives birthed by the United Methodist Women.

Click here to see photos from the Bishop's journey...

Small membership churches can be vital and extremely critical in the life of the community.

Local pastor Janice Kahl was appointed and in five years the attendance at both churches has increased. In one of the poorest counties and poorest towns in the United States the people of the Fabens church opened their doors to immigrant families sharing their church as a place where the Gospel (Good news of Jesus’ love) was shared on Sundays and then shared every other day through ministries of clothing, English classes, and children's ministries with those crossing the border from Juarez.

The need for an active outreach exploded with the increase in migrant farm workers and children with families relocated in the independent school district.

The pastor reached out to three little children playing in the street and now a small church with no Sunday school for years now provides vacation bible school and Sunday school and become part of the many churches coming together to provide crossing the border ministries and ministries with the poor who live in Fabens, Texas.

This church could have chosen to die because they have a membership that is older and had many more deaths than baptisms in the last few years. United Methodists are engaged in finding new life by claiming their mission as the church not just in the community but the church for the community.