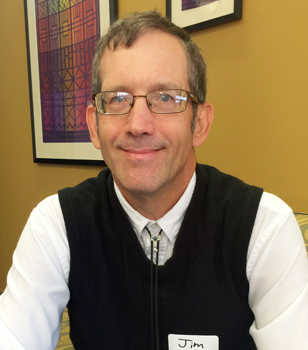 Click here to listen to the conversation with Rev. Jim Roth

James H. Roth Jr., pastor of the New London United Methodist Church, will be running his sixth marathon, The Haunted Hustle in Middleton, WI, on October 26, 2014. It will be a celebration of Jim’s transformation through faith and fitness and  also a birthday celebration for his role model and one of the 26 reasons he runs. This marathon coincides with his father’s, James H. Roth Sr.’s, 90th birthday and Jim looks forward to celebrating both accomplishments.

Four years ago Jim was reeling from the loss of three significant deaths in his family: his sister, his Mother and his 33-year-old nephew’s. His nephew’s passing really hit him hard because he left four young children and died from complications from gastric surgery in an effort to lose weight. Jim knew he had to do something about his own weight and health and it needed to start immediately.

With the support of his wife Luanne, Jim joined Weight Watchers and as the weight came off, his motivation was boosted. For exercise he walked and hiked the trails at the Anamosa Wapsipinicon State Park and after he lost about 40 pounds, Jim said, “My legs wanted to run. I had to rein them in because I didn’t think I could and I didn’t want to experience any set-backs from injured knees or joints.”

Soon he had lost over 50 pounds and with the encouragement of his Weight Watchers leader, he took a leap-of-faith and purchased a pair of running shoes. His wife gave him a logbook and he found a Couch-2-5K walk/run interval-training plan in a Weight Watchers magazine. After about eight weeks of training Jim could run without walking and chose his first race.

On May 19, 2012 Jim ran his first race, the six-mile Great River Bridge Race from Burlington to Gulf Port Illinois. Afterward he decided to train for a half marathon and (because the training for each is very similar) a full marathon!
In the fall of 2012, Jim ran three half marathons. His favorite was the 12:1 Run organized by Harmony Bible Church outside of Danville, IA which is run on paved roads and goes through Geode State Park. Named after scripture from Hebrews 12:1, “Therefore, since we are surrounded by such a great cloud of witnesses, let us throw off everything that hinders and the sin that so easily entangles. And let us run with perseverance the race marked out for us.” The proceeds from the 12:1 Run are used to purchase water filtration units and to distribute them around the world to provide the gift of clean water to those in need.

Jim’s first marathon was the 2012 Des Moines Marathon and he describes it as “kicking his butt” when he hit the runners wall around mile 19. He had to walk four or five miles until he found his second wind and the encouragement of his wife and two daughters, Emily and Christina, who cheered him on. He also decided he wasn’t going to stop at one and continued to train. He went on to run two more marathons in the spring of 2013, the Kenosha and Greenbay.

Jim decided to beat the “demons” of Des Moines and trained hard using the Jeff Galloway method to run the 2013 Des Moines Marathon. He conquered them and ran his personal best time by coming in under five hours at 4:46. He went on to run the Marathon-to-Marathon in Storm Lake on June 14, 2014.
Jim dedicated his first running of the Des Moines Marathon to the Imagine No Malaria campaign after being inspired to do so by three high school cross country runners who spoke at the Iowa Annual Conference in 2013. Their ambition to bike and run across the state of Iowa witnessing at churches about the Imagine No Malaria campaign inspired Jim to start his own campaign called “ImJim.”

He continues his marathon training to celebrate life and longevity and has dedicated his sixth marathon to his Father’s 90 years and the New London United Methodist churches 179.

In 2012 Bishop Julius Trimble’s Fit Challenge and the Wellness Ministry of the Iowa Conference was developed to encourage people in professional ministry and their families to maintain or improve their comprehensive health status. If you are interested in beginning a running program or training for a marathon using Jeff Galloway’s run walk run training methods visit www.jeffgalloway.com.