Town-Hall meetings - “Healthy discussion is very good for us” 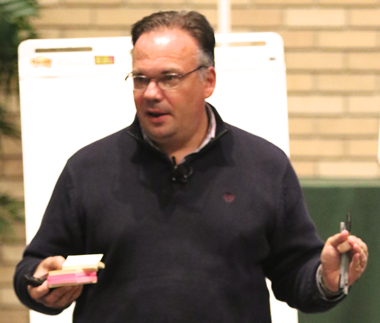 “Healthy discussion is very good for us,” is Terry Montgomery’s assessment of the series of Town Hall meetings that’s underway.  The Dubuque session, to be held on Monday, November 24, begins the second-half of the 16 gatherings. (Click here for the complete list  of locations, dates, and times.)

“We’ve been happy with the attendance so far…a little snow held some people away at a few sites, but that’s the nature of Iowa this time of year,” Montgomery said, adding, “We’re encouraging everybody to come to the remaining eight sessions.”

People have been engaged during the Town Hall meetings.  “That’s been the most exciting part – there is engagement.  We’re not trying to get a conclusion in these presentations.  What we’re trying to do is start a conversation.”

He described the sessions.  They are “These are meant to be listening sessions designed to offer input into the budget and ministry plans for next year.”  There are four sections to each session.  “There’s an opening activity, followed by a discussion of the strategic priorities that were adopted at the 2013 Annual Conference session, a presentation from the Design Task Force, and one on the financial health of the Conference.”  The “opening activity” is an opportunity to “express what they need in their local churches…to ask, ‘What does the local church need from the Conference?’”
Input from the sessions will be collected.  “We’ll share all the results of that…after the last one is completed – we want people to provide input at all the sites without it being influenced by what others have said.  That piece of feedback, as well as all the feedback in the rest of the sessions, is very important to us.”

Members of the Design Task Force have had an opportunity “to explain the initial proposal.”  Terry Montgomery suggested, “There will be changes from the initial draft – that’s clear from the feedback and the surveys that we have.”
There have been a few surprises.  For example, “the absolute love of “Treasury Notes” was a surprise to me” he said.  “In terms of communications pieces, the ones that touch the local church on a regular basis have proven to be very important and popular.”  And in response, the first issue of a rejuvenated “Treasurer’s Notes” was distributed late last week.

The Town Hall meetings “are meant to be departure points and start more discussions of what do we need, what don’t we need as we move forward, and what do we want/what can we afford.”  Terry Montgomery concluded by noting, “discussions are occurring, and that’s exactly the intent of these Town Hall sessions – to provide everybody with the information they need to make informed decisions.”