On Race and Hope – A Community Valuing All People 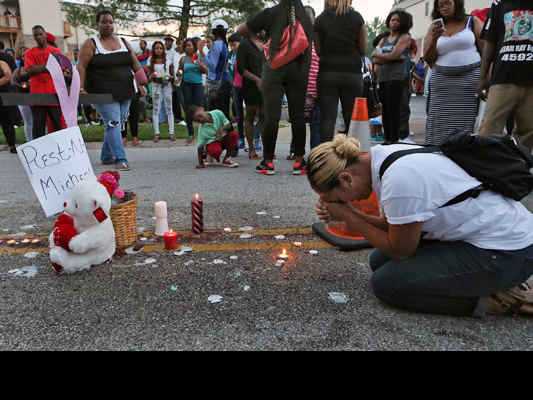 Note: These words from Bishop Julius C. Trimble were shared as part of a lecture at Cornell College Mt. Vernon Iowa, November 11,2014. He shares them as an offering for constructive conversation and as lament and hope as we seek a more excellent way in light of Protest and destruction in Ferguson, Missouri.

When it comes to the subject of race, racism, and American tribalism, I am a harbinger of hope, a trafficker of love. However I do believe we suffer more as a society when we live in a state of denial or choose to ignore historical truths.

Slavery existed in our country from 1619 through 1865, when the 13th Amendment was passed. Our nation’s original sin was not the economic and human exploitation of African slaves but rather the near extermination and successful subjugation of indigenous natives. By the time of the Declaration of Independence and the birth of a new nation in 1776, 20 percent of the population was African slaves. From 1865 to 1967 legal discrimination, based on race, was very much a part of the social political and economic fabric of America. At the time of the "Loving vs. Virginia" Supreme Court decision in 1967, sixteen states had laws prohibiting interracial marriage.  Mildred Jeter Loving and Richard Loving, both of Virginia, returned to their home state after they were married and were sentenced to one year in jail because Mildred was black and Richard was white and interracial marriage was against the law in Virginia.

In 2014, slavery, sex trafficking, mass incarceration, and discrimination based on race and economic status are realities that impact many parts of the globe.  Racism is not a figment of the imagination of African Americans and other peoples of color. Racism is a societal cancer that has been massaged by progress, yet still spreads for lack of a cure.  Racism is prejudice plus intent to do harm or discriminate based on a belief that one is superior or has freedom to use power over another based on race.

An African American pastor recently posted on Facebook news that on October 30th of this year the FBI most wanted fugitive, Eric Frein was taken into custody without incident.  No deadly forced used against this fugitive who had already killed a state trooper and was found to have in his shelter 2 guns and several pipe bombs. He was apprehended without incident while walking back to his hiding place. The pastor posted, "What's up with that? As mothers of Michael Brown, Trayvon Martin, and Oscar Grant grieve the loss of their sons. The point is that many people feel that African American life is treated as somehow less valuable and disposable when fear and suspicion is given as a reason for deadly force. When black gang members kill other young blacks, including innocent children, they usually end up in prison. When white police officers use deadly force and shoot unarmed young men they are more often than not exonerated before a trial ever takes place.

Many people say we are past the days where race really matters when it comes to justice and equal opportunity. There are those who point to the election of President Obama as a sign we have passed through the turnstile of progress into a colour-blind society. I disagree. To be pro-humanity is not to be colour-blind, but to embrace diversity with all of its colours and cultures, stories of pain and celebration. The goal should not be a colour-blind society, but rather a nonviolent society where capital punishment is not so readily dispensed leaving a young man dead lying in his own blood for four hours.

At the time the election of President Obama was celebrated as a great sign of progress, credible threats against the life of the President and First Family increased by 400 percent. While optimistic about continued progress in the area of racism and race relations, the President is himself aware that race still matters.

The president is right to call for respect for the law and prayers for families who grieve. President Obama is fully aware that Ferguson, Missouri highlights the reality of the difficulty our law enforcement officers face in protecting and serving the public, as well as the tension that exists in certain communities when residents believe that their race may put them at greater risk for mistreatment by the law. Greater trust must be developed with more training and more cooperation between police and the communities they serve. Racial profiling and negative encounters with police are part of the backdrop of the critique that justice is not blind nor is it applied equally.

In 1974, when I was a second year college student, I, along with my younger brother James, went to visit our older brother in California. He lived near Palo Alto, California and was working for Hewlett Packard as a computer engineer.  While traveling to his apartment in his Volkswagen Beetle we were stopped by police who questioned my brother and asked for license and registration. Even though he produced his license, registration and work identification we were still told to exit the car with hands up. Additional squad cars arrived and with guns drawn on them, three young African American men were handcuffed and taken to jail. We remained handcuffed for about 45 minutes and were then released after being told that my brother’s car was not stolen but we looked out of place and suspicious driving in that community. My older brother, John, now a college professor, was, at the time of the incident, a graduate of Northwestern Univeristy and Stanford University. 1974 was a long time ago, but thousands of African Americans have similar stories.  A recent CNN special highlighted one college student in New York who had been stooped and frisked over 100 times.

I have come to believe that Racism, like other sins, keeps us from being whole persons capable of living up to our highest potential.  Racism denies the "imago Dei" the very belief we are made in the image of God. The handprint of love and equality implanted in every human soul does not allow for fear and hatred to meet at the intersection of prejudice and injustice.

In April of this year I preached a sermon for the Iowa United Methodist Conference School for Ministry. "A World Without Hatred" was based upon Matthew 5:43-44...." You have heard that it was said that you must love your neighbour and hate your enemy. But I say to you, love your enemies and pray for those who persecute you."
I began with the story of Frazier Glenn Miller, age 73, who had a history and previous arrest record for violent hate crimes. On April 13, 2014 Miller was arrested following the Overland Park Jewish community shooting.

I suggested we take the same map of our country and put dots on all the places there are churches, mosque, synagogues and temples, colleges and high schools.  My point is that hatred is taught but, as Dr. Martin Luther King Jr. said, "darkness cannot drive out darkness only light can do that and hatred cannot drive out hatred only love can do that".  A world without hatred and Racism is not only conceivable but well worth our pursuit.

Maybe we should reconsider the words of Marian Wright Edelman; "the struggle for racial justice is a struggle of conscience and not of race".

At the end of the day I lament because I know we can do better. I remain a prisoner of hope because justice and hope give us the ability to work for something not because we know we will succeed, but because it is the right thing at the right time.

I concluded my remarks at Cornell College inviting students to join me as one who is anti-racist and pro-humanity. Let us not become colour-blind toward each other but love-struck with each other. The beloved community is not based upon ignoring difference but valuing all people.

What does The Lord require? "do justice, love mercy, and walk humbly with God."