Ministry orders and fellowship gather – ‘we responded to God’s call’ 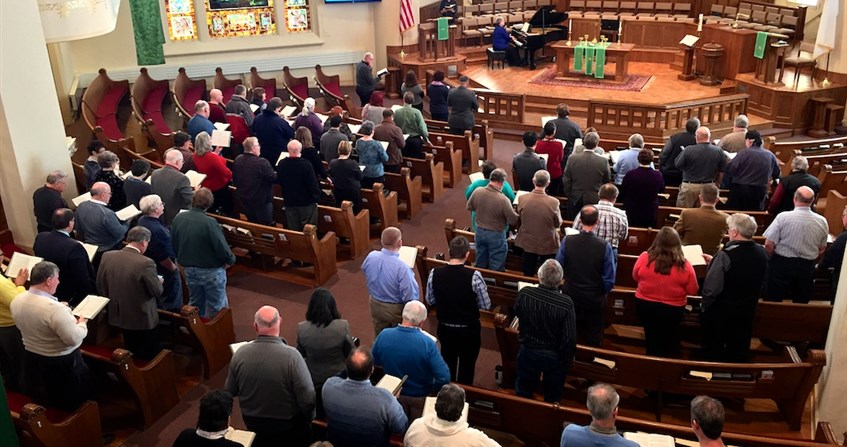 February 03, 2015
share
"We are here because at one time or another we responded to God's call" said Pastor John Brockschink as the winter meeting of the orders of Elders and Deacons and Fellowship of Licensed Local Pastors began.  The twice-yearly gathering of ministry leaders was held at First United Methodist Church in Ames.

Bishop Julius Trimble called it “a privilege” to be in ministry with persons in the Iowa Conference and affirmed the Elders, Deacons, and Licensed Local Pastors noting, "we do worshipful work."

In The United Methodist Church an Elder is ordained to mission and service.  According the Book of Discipline, an Elder, who is the "pastor in charge," is an itinerant clergy person who is ordained to "Word, Sacrament, Order, and Service."

Rev. Linda Butler described her own journey, which included advanced degrees in education and experience teaching.  She spoke about her spiritual formation and becoming an itinerant pastor, in her second career, was “just part of who I am” and she feels “blessed” to be part of such a system.”

Chair of the Order of Deacons, Rev. Chris Humrichouse, described that group's ministry as being one charged with "embodying the church's mission to the world."  Specifically, a Deacon, she said, is ordained "to a lifetime of word and service to both the community and congregation."  The service may be to a local church, several congregations jointly, or to a secular vocation - a Deacon "may be ordained to the world."

Continuing his opening theme, Pastor John Brockschink, suggested that licensed local pastors, such as himself, while not ordained, do receive an appointment from a Bishop.  Pastor Jodi Rushing added that licensed local pastors "oversee the total ministry of the congregation in its nurturing ministries and in fulfilling its mission of witness and service in the world."  Rushing also noted, "We are called to be in ministry and in a covenant community together."

The afternoon conversations continued in break-out sessions for the three groups - the Elders, Deacons, and Licensed Local Pastors met separately, among themselves, to explore the purpose of each group, their hopes, and also the value of meeting together as one larger group of persons in ministry in the Iowa Conference.

The day concluded much as it began.  Through a Baptism remembrance the worshipping community affirmed, "We are here because we have responded to God's call."