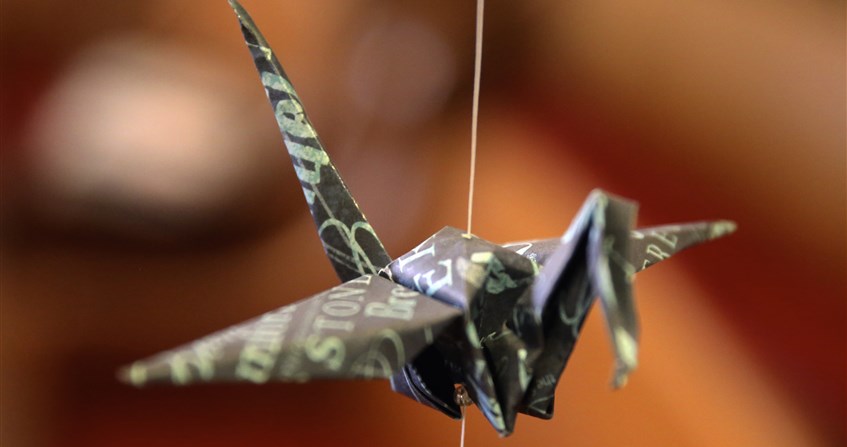 More than 500 cranes hang along the exterior of the sanctuary of First United Methodist Church in Ames.  Filled with personal words, the origami cranes offer a visible witness of the hopes of many in that community of faith.

“We did the peace cranes a year ago,” Rev Fred Lewis, Ames First’s Pastor, recalled.  “We wanted to do something visible,” he added, to "reflect a heartfelt desire for peace.”

The pieces of paper that were folded into the cranes “were handed out on a Sunday morning during worship,” said Rev. Bethany Willers, the church’s Associate Pastor.  “It was an idea that Fred and I had together that he worked into his sermon.”  She collected the papers and worked with a team to fold them into the crane shape, symbolic “of God’s love and peace in this world.” 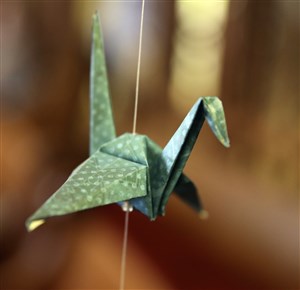 The symbolism of the crane is personally special to Rev. Willers. “I was a dancer, growing up.  In high school my dance teacher created a ballet about Sadako and the thousand paper cranes. We ended up taking that ballet to churches in Des Moines and performing it in worship services.  So, it was a ministry that I did in high school and now a part of my ministry again.”

More than 500 cranes were folder and hung up around the sanctuary.  For Rev. Willers “it’s relaxing.  It’s also a spiritual practice for me to fold paper cranes.”

The reaction of the congregation?  “they loved it,” Rev. Willers added.  The cranes have been up now for two Advents and many at Ames First United Methodist Church have learned how to fold the cranes on their own, a personal spiritual practice and peace witness that their pastors both call, “fantastic!”
___________________________

Learn more about the story of the thousand paper cranes

Rev. Takayuki Ishii’s book, One Thousand Paper Cranes, tells the story of Sadako Sasaki who died of Atomic Bomb Disease ten years after the atomic bomb was dropped on Hiroshima.  He writes on his website, “Sadako's determination to fold one thousand paper cranes, symbolizing her hope for peace, and her courageous struggle with her illness inspired her classmates.  After her death, they started a national campaign to build the Children's Peace Statue in memory of Sadako and the many other children who were victims of the bombing of Hiroshima. On top of the statue is a girl holding a large crane in her outstretched arms. She is Sadako Sasaki. To this day, in Hiroshima Peace Memorial Park, the statue of Sadako is beautifully decorated with thousands of paper cranes brought and sent by people around the world.”  The book is available from Amazon.com