Disaster Preparedness and Response Ministries ‘show that we care’ 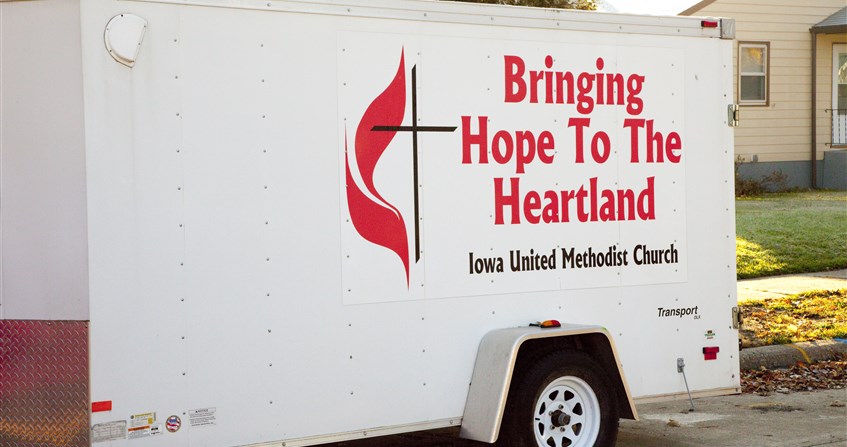 For Rev. Catie Newman, Iowa Conference’s Disaster Preparedness and Response ministries “show that we care.”  As important as it is to deal with fallen trees after a tornado or help remove water from basements after a flood, the act of “simply being there means so much; it means that people know that they’re not alone, that they’re cared for.”

“There are really two parts of what we do,” Rev. Newman said.  “The first is preparedness, helping people to know what to do, in advance.  The second is what happens in response” to a storm or other disaster.  For her, knowing what to do, ahead of time, is as important as knowing the steps to take after something has happened. 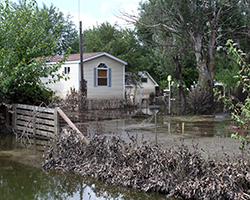 The Disaster Preparedness and Response ministries help people learn what to get in place.  Such things as having a list of medications, telephone numbers of people to contact, a flashlight, weather radio, and the whereabouts of important papers is vital.  Having a designated place to go preset when a storm warning is issued helps to “give a little control in the midst of chaos and anxiety.”  Cards with key checklists “have been distributed at past Annual Conferences” and will be again.

The Response part of Disaster Preparedness and Response ministries includes ERT (early response teams), groups of people ready to help with such things as providing food and water, health care supplies, bringing tool trailers or the shower trailer.  “These folks are ready to go at a moment’s notice” Rev. Newman said, “in Iowa and beyond.”  There are also District coordinators who “contact every congregation in a particular disaster area on the first day, speaking with pastors to learn what’s needed most, when and where.”

“In Iowa,” Rev. Newman noted, “people help neighbors.  Sometimes, even, the response of people reaching out to each other is so great that our ERT’s aren’t needed!”  While ERT’s might not be needed to saw tree limbs or pump water or clean basements, initially, they do provide an additional vital response – spiritual care.  “We are a church family,” she noted, “and will be there for one another, walking side-by-side, helping to ‘just be’ with one another and reminding that God is present, loving and caring, no matter what.”  While it’s often hard to focus in a crisis, the ERT’s are a “prayerful presence,” calling on God for strength. 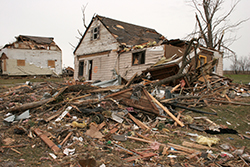 Rev. Newman recalled what happened during the disaster that struck Mapleton, Iowa.  An EF3 strength tornado devastated the western part of Mapleton at about 7:30 pm on April 9, 2011.  Some reports indicated that more than half the town was damaged or destroyed.   People heeded the early warnings and took shelter.  Shortly after the tornado it got dark.  First responders searched for survivors and made an initial damage assessment.

“I spoke with the pastor that night,” Rev. Newman recalls.  “The next morning I spoke with the District Superintendent.”  Through her calls she learned about the needs – initially water and cleaning supplies.  “We were there the next day,” though the United Methodist response stayed out of the way until the all clear was given by the first responders.  “The United Methodist name was there the next day.  Many United Methodist teams brought food to the church, which was our staging area.”  The post-storm response “was tremendous.  The extended community worked so hard that by Sunday night the initial clean up was nearly done.”

Characteristically, “we help everyone.  We go to be helpful,” Rev. Newman observed.  The initial triage revealed the needs.  “We followed the directions from the people who lived there…they told us what needed to be done.”  For Rev. Newman that sense of disaster survivors’ self-direction is important.  “Our role,” she said, “is to listen and then do what’s needed.  Because of that we worked well together…and we made a big difference.”

There will be a series of workshops and training sessions this spring, sponsored by the Conference’s Disaster Preparedness and Response ministries.  While intended for persons 18 years old and up, “there is a place for all ages,” she said.  Some can do physical work.  Others can drive one of the seven tool trainers (which are staged across the geography of the Iowa Conference) or the shower trailer.  “Some people can provide stability, can make phone calls, and most especially, can pray – praying together is so important, whether it’s in a church far from the scene or praying with people right there in the midst of the recovering community.”

Everyone can do something.  About this Rev. Catie Newman is very certain.  “This works,” speaking of the Disaster Preparedness and Response ministries, “because we care about one another.”