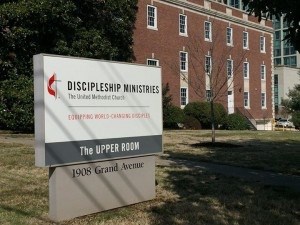 Discipleship Ministries has officially become the new name of the general agency of The United Methodist Church known for years as The General Board of Discipleship, or GBOD.

“The shift from General Board of Discipleship to Discipleship Ministries was an intentional decision to more clearly communicate the work we do for The United Methodist Church,” Bias said. “On one level, we are adopting a ministry position. We want to listen and develop resources that help leaders make disciples and transform the world. The process of disciple-making is essential as we seek to develop and sustain vital congregations.

“On another level, we are a United Methodist Church agency. Changing our name to reflect our work and using the official United Methodist cross and flame logo helps us to be in alignment with the ministry and mission of the denomination,” Bias said.

The name change was approved during the agency’s board meeting in July 2014 in the Philippines, and has been used unofficially since mid-September.

Now Discipleship Ministries will no longer use The General Board of Discipleship or GBOD and will begin phasing out those names in its communications and marketing. However, the former name will continue to be included in The United Methodist Book of Discipline.

During a transition period, the former URL and email addresses will be forwarded automatically to the new locations.