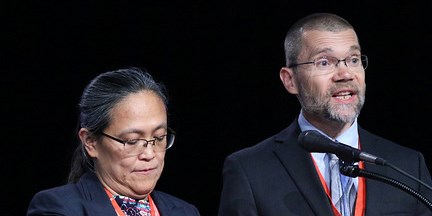 The Great Commission from Matthew 28:16-20, with the verse, “Go therefore and make disciples of all nations,” was prevalent throughout the 11 days of the Conference, Rev. Seagren said.

Iowa was represented by 12 lay and clergy delegates at the Portland, OR., Conference, along with hundreds of other Methodists from Africa, Europe, Asia and the Americas. In addition to the delegates, Iowans served in parliamentary and administrative capacities, as well as observers, marshals, translators, recorders and other roles.

Mr. Carver said the General Conference attendees had been called to remember a quote from John Wesley:
“I envision a revival of holiness, that moves forth in mission and creates authentic communities, where every individual empowered by the Holy Spirit can be unleashed to fulfill God’s creative intentions.

Numerous actions were taken at the General Conference, including updating the United Methodist Book of Discipline, electing new leaders for general boards and agencies, and approval of a new hymnal with cloud-based technology. Further, support was expanded for growth of United Methodist Churches in Africa and a $603.1 million budget adopted for 2017-2020. Health and pension plans for church leaders were updated as well.

Mr. Carver and Rev. Seagren spoke about tensions and differences expressed at the General Conference, with specific regard to human sexuality and the Book of Discipline.

“We prayed fervently together in our worship each day but became distracted too often by parliamentary procedure when discussions became contentious,” Mr. Carver stated. “Many of us hoped for more time to engage in Christian conferencing to make decisions for strengthening United Methodist churches everywhere.”

The Council of Bishops had made a proposal, offering a way forward “for profound unit (that) allows for a variety of expressions to co-exist in one church.” This led to the Council empowering the General Conference to establish a special commission “to develop a complete examination and possible revision of every paragraph in our Book of Discipline regarding human sexuality.’

There will be representation on the commission from every region and different perspectives, Rev. Seagren said, and it will look at “language which is contradictory, unnecessary, hurtful and inadequate for the variety of local, regional and global contexts” of the Church.

As the commission carries out its work the bishops had pledged to “explore options to help the church live in grace with one another – including ways to avoid further complaints, trials and harm while we uphold the Discipline.”

Mr. Carver spoke of trust, that through the Holy Spirit, God’s will would be done.

In one case of building upon the success of Imagine No Malaria, he said, United Methodist churches globally would be implementing a new global health initiative to reach one million children with life-saving and health promoting plans by the year 2020.

“This initiative is a continuation of one of four areas of focus for ministry in the church,” he continued, “alongside ministry with the poor, developing principled Christian leaders and creating new places for new people.”