AC2017 Board of Pensions Annual Meeting 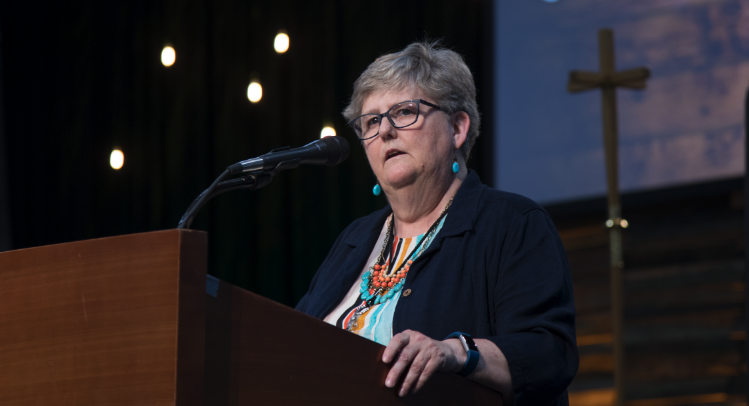 “But we understand the financial climate we are in,” said Bell. “And we can grow it through good investments.”

Bell explained that the Pre-82 Pension Plan rate would increase by $6 to $640.

“The big issue this year was health insurance,” Bell then told the Conference Session.

She shared how the Board of Pension had held a meeting in advance of the Annual Conference Session to address the issue.

“What the churches are charged for health insurance for the pastor does not really cover the premium,” she stated.

She also said in terms of health insurance that the Board focused on what good for the most people could be achieved at the least cost.

One-hundred-percent of the premiums paid to Wellmark for clergy by the Conference had gone to paying claims last year, and the insurance company did not recoup ant administrative cost. Thus, Wellmark issued a 26% increase on Conference premiums for the coming year.

Bell mentioned the current insurance climate in Iowa with companies abandoning the market in explaining the task before the Board of finding an alternative.

After looking at 35 different healthcare plans, she said, the Board determined that staying with Wellmark was the best option.

“We talked about our covenant to care for one another,” she said.

With a new plan – Alliance Select replacing Blues Choice – clergy and their families would still have access to 97% of Iowa doctors and 100% of the state’s hospitals. But the deductible will be higher.

This keeps the increase in cost to the Conference to 10% as opposed to 26%, Bell said, and the Board of Pensions will decide at its August meeting how to best absorb the increase.

“Again,” Bell said, “Our focus is what good can be done for the most people at the least cost.”

The new health insurance plan is set to go into effect January 1, 2018.