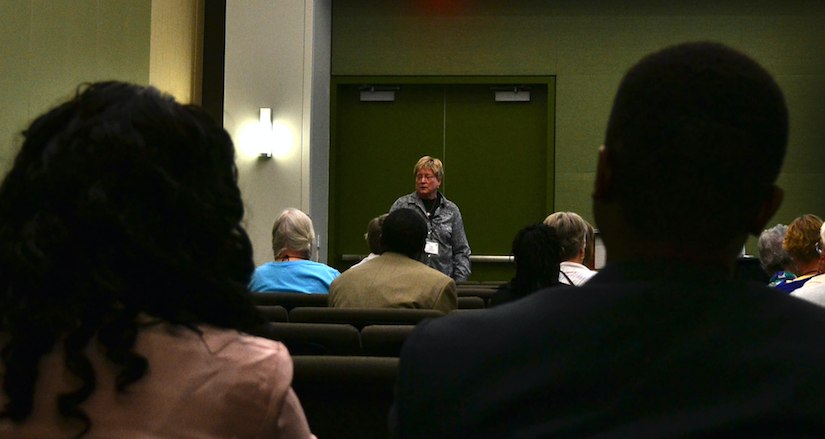 June 10, 2017
share
On day one of the 2017 Iowa Annual Conference, attendees had the choice of attending nine workshops following the afternoon session. Attendees were given a glimpse into the United Methodist Organization EmpowHer.

EmpowHer was started in association with the Iowa Nigeria Partnership (INP). EmpowHer follows a microfinance model, where entrepreneurs, specifically women, are given small loans to start a business.

Microfinance has around for centuries, the modern model of microfinance is attributed to Muhammad Yunus of Bangladesh. In the 1970s, Yunus began offering small loans to poor laborers, before eventually forming the Grameen Ban in 1983. The bank now has 2,500 branches with one in Omaha, Neb.

Empowering Women
In Nigeria, 66 percent of total labor is done by women, but only 10 percent receive wages, said Judy Marnin, presenter for the workshop. Many of these women want to provide for their families, but have no access to capital. Those that do have a business often do not have control of the money they make.

“The goal of the program was to offer small business loans,” she said. “So in 2012, we started a small microfinance program.”

Women who apply for the program must fill out an application and form a 10-person group of women. They group internally picks officials.  They present a proposal for their business plan. If they are approved, they are given around $60 US.

If their business is successful, they can pay for children’s school fees, purchase food for their families, purchase health care for ailing parents or update their homes.

The women in Nigeria are creative in their business models. Women started: embroidery businesses, a roadside stand with a variety of items for sale, a fish stand, a lunch stand.

One woman was especially creative and saw a unique need in her town and started a business out of that. In Nigeria, some areas do not have steady access to electricity, if any. In a world of cell phones and tablets, the woman saw people needed a source to charge their devices. She purchased power strips and a generator with her small loan and created a charging station for all manner of mobile devices.

Issues
Marnin said it is estimated EmpowHer has helped 22,000 people, from the women, families and the people who use their services. Like any program, though, EmpowHer has its issues.

“It’s hard to start a small business if everyone around you is also in poverty,” she said. “If you are selling lunch to workers, but there are no workers, how can you make money?”

Women must also make their payments on their loan, even if they did not make any money. This often leads to women borrowing the money from an outside lender, doubling their debt.

“We are still looking for a solution to women’s poverty,” said Marnin.

Despite the core issues surrounding women’s poverty, program like EmpowHer and Self Help International, which also help microfinance women-owned businesses in Nicaragua and Ghana, are leveling the playing field for women the world over.