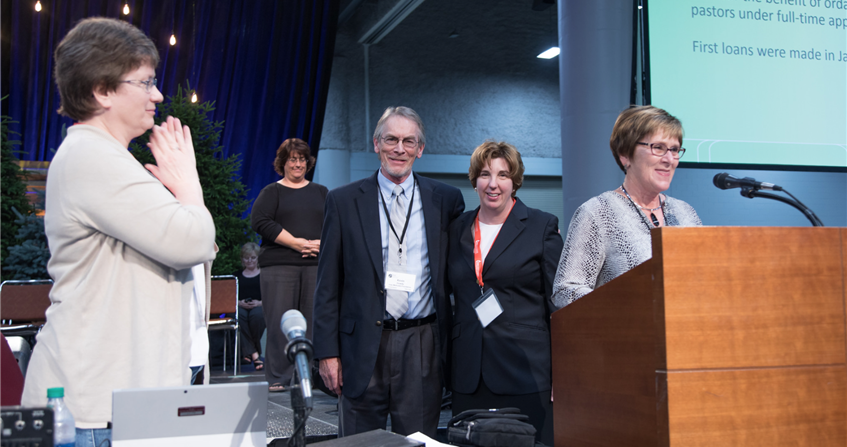 President-elect for the Iowa Annual Methodist Foundation Board of Directors Kris Manning called the Foundation’s annual meeting to order on Monday afternoon during the Annual Conference Session.

Manning ran down Foundation assets as of the end of 2016 for the Annual Conference Session.

Regarding Fund Investments, the largest investment fund at 50%, is the balanced fund which is invested for growth and income and used by the majority of Churches investing through the foundation.

The Building Fund Trust is second largest with 22% of the portfolio comprised of certificates of participation owned by churches and Iowa United Methodist individual members.

“2016 was a good year for the markets according to our portfolio,” Manning stated, pointing out that the Foundation's portfolio is invested according the Social Principles of the United Methodist Church.

In the area of Building Fund Trust Rates, Manning gave figures related to how Iowa United Methodist churches and individuals invest in Certificates of Participation, which funds the mortgage program for Church capital projects. Certificate rates are 1.4% for 1 year, 1.9% for 3 years and 2.3% for 5 years. And, the current loan rate for churches is 5%.

The Treasurer's report and Nominations report were presented by Nitza Dovenspike, the Foundation Board's Treasurer and Chair of the Administration and Finance Committee.

Dovenspike named the IUMF Board Nominees for the Class of 2021. For a first, 4-year term on the Board is Mike Orthel, clergy from Ankeny.

For a second 4-year term on the Board, layperson Tom Bates from Sigourney, and layperson Lesa Moose from Monona.

The slate was recruited by the IUMF Nominations Committee and ratified by the IUMF Board of Directors. The IUMF Annual Membership voted in favor of the slate.

She went on to offer a few examples.

Higher Education Loan Program for Pastors (H.E.L.P.) was introduced last year at Annual Conference Session and the Clergy Session. The program provides refinancing of student loan debt for the benefit of ordained deacons and elders and local pastors under full-time appointment in the Iowa Annual Conference.

The first loans were made in January 2017.

Manning shared that 13 people applied for a loan, and 12 met the requirements. Twelve loans were offered and 11 accepted the offers.

The average loan rate of the 11 people prior to refinancing was 5.8%. The new loan rate for all of them was 1.5%, Manning said, resulting in a total of $82,315 saved by the participants over the life of the loans. This figure garnered applause.

Manning announced Rev. Kevin Gowdy's retirement at the end of the year, and his successor, Rev. Dr. Katharine Yarnell—current Field Outreach Minister for the North Central District—as the Foundation’s new executive director. Rev. Yarnell will begin in her new role August 15 and there will be some overlap with Rev. Gowdy’s departure. Manning said this would ensure a successful transition.

Manning closed by thanked all of the churches, the Conference Boards and Committees, related institutions and agencies, and individuals for entrusting their funds to the Foundation’s care.

The Foundation report is also available on our website www.iumf.org under the "all events" tab.