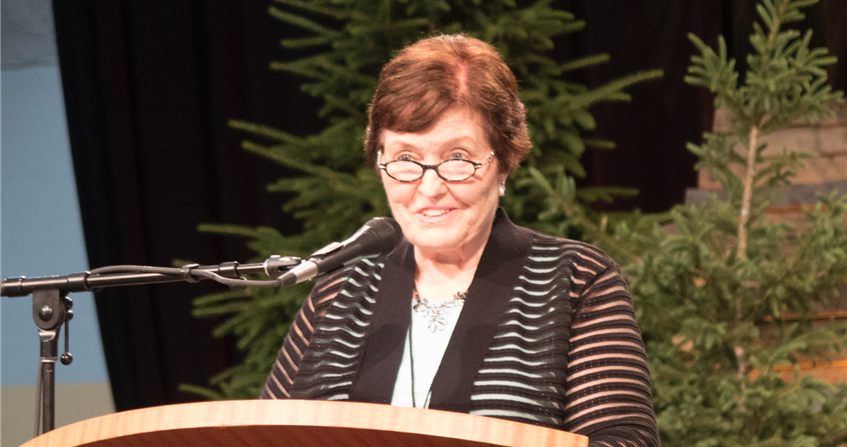 June 11, 2017
share
The Laity Address for the 2017 Annual Conference Session opened with the hymn O For A Thousand Tongues to Sing.

“The Almost Christian sermon is a very long sermon in which Wesley ultimately asks rhetorically “What it is to be 'altogether a Christian?'” Borgen said.

In it, Wesley lists three measures; the love of God, the love of neighbor, and “a sure trust and confidence in God” (as known through Christ).

Borgen said that when Wesley talks about the measures of a Christian life, that we are to “seek only the good of others,” he also talks about sincerity.

She said, “By that, he says: 'I mean a real, inward principle of religion, from whence these outward actions flow. For Wesley, sincerity in one’s faith implies a real desire to please God in all of one’s actions.'”

“Wesley tells us that actions matter,” Borgen stated, “both those we do and those we intend to do.”

Methodical as he was, she said, Wesley didn’t try to cover every situation with a rule.

“Rather, he said, if we love God, love our neighbor and put our trust and confidence in God,” Borgen continued, “we’ll do the right things, live the right way, make good choices.”

So, the altogether Christian doesn’t need rules about everything, she explained. The Christian’s actions are a response to God’s grace and lead to lives centered on others, not on self.

“In a Wesleyan sense,” she continued, “our difference making becomes intrinsic to our life when we are guided by Wesley’s concept, “An inward principle of religion, from whence outward actions, flow.””

Borgen offered some simple everyday examples of being a difference maker, including a Sunday school class washing windshields while their congregation was in church, leaving positive notes on their cards, and a young adult man being kind to a young developmentally disabled girl on an airplane who was flying alone and afraid.

Sometimes being a difference maker is harder.

Borgen told about the first black physician in Cedar Rapids decades ago who faced opposition in buying land to build a house, and the Saint Paul UMC there was instrumental in helping the family purchasing a lot for their home.

“Being a difference maker could mean standing with a friend who has been wronged by an unfair system,” she told the gathering, “even when doing so may threaten one’s own job or reputation.”

“It could mean the discomfort of stepping outside one’s usual means of expression,” she continued, maybe joining a demonstration for the first time because you are convicted that a statement must be made on behalf of someone who can’t risk making it for themselves.”

“We can be difference makers by acting on behalf of others,” she said further. “Do you hear John Wesley’s echo? 'Love seeks only the good of others.'”

Borgen said that being a difference maker can mean everyday actions and kindnesses—words that lift people up—and it can mean living one’s whole life on behalf of others.

“No matter how we do it,” she said, "being a difference maker is always in the Wesleyan tradition of 'seeking only the good of others.'”

Borgen discussed divisions currently within the life of the United Methodist Church.

Many wish the issues would just go away, she explained, but of course, that will not happen.

She offered the quote:

“Life isn’t about waiting for the storm to pass. It’s about learning to dance in the rain.”

Although they’re secular words, Borgen said they help describe where we are right now in the United Methodist Church.

“In a metaphoric sense, there is a 'storm' in our church and we so wish it would pass,” she stated. “But wishing we know is not a strategy, is not a plan”

During the storm, both urgency and integrity call us to “continue to dance,” Borgen told Conference Session attendees.

This means continuing to make and nurture disciples, to welcome the stranger, to feed the hungry and clothe the naked, to advocate for the powerless, to care for the children, their education, their safety, their environment, to provide comfort and love and guidance to those who feel lost or alone and who have not heard the stories of Jesus and to embrace those who are excluded for any reason.

“We need to keep dancing, doing the work of the church,” Borgen stated, “being difference makers—even in this stormy time.”

Because now, and when the storm lifts, she said further, God’s people need the church.

She encouraged prayer for God’s presence in every aspect of the conversations dividing the Church. And she recommended listening with both heart and head.

“We must be willing to share our perspectives, strongly but always lovingly,” said Borgen. We must think about and be open to adaptive solutions that may be proposed, and consider only those solutions for our church that are honest and have integrity—we cannot pretend.”

“We must be strong and attentive and kind,” she added, “even though the struggle has been much too long.”

“Life isn’t about waiting for the storm to pass,” Borgen concluded. “It’s about learning to dance in the rain. It’s about being difference makers where we are and at this time.”