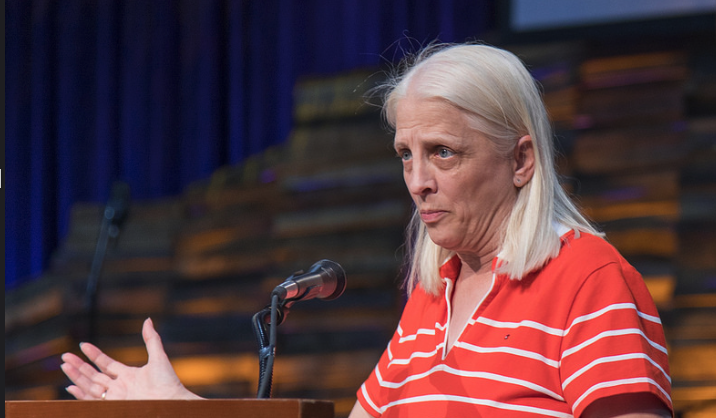 She has also served in several community-focused Board capacities in the Detroit area.

Bishop Laurie introduced her as “the ultimate difference maker,” and saying, “There’s no one like Faith Fowler.”

Rev. Fowler spoke about the history of Cass Community, the having been built in 1881.

During her tenure, the organization has undergone numerous property acquisitions and program expansion.

Rev. Fowler spoke of how decades ago there was a struggle for the church’s identity, out of which grew more focus on social outreach. Cass began serving meal during the Depression, she said, and hasn’t stopped since.

Rev. Fowler also shared a poignant anecdote about riding along to deliver meals and questioning the need in one case, only to learn of the loneliness of a meal recipient who’d lost his wife months before.

“Sometimes it’s about the food – sometimes it’s really not,” she said. “We’re into making sure people are fed, we really don’t want to know why.”

Rev. Fowler spoke about the mental health outreach beginning in the 1980’s.

And she mentioned the marked increase in children among the homeless population.

Rev. Fowler told how she once took shelter residents to church, thinking for several reasons it didn’t work out well, only to have a resident return later to offer a tithe after having gotten a job.

“People want to work,” she stated. “and once they do, everything changes.”

The reverend went on to say, “I don’t know if we have the prescription to change everything. But all of us can make a difference.”

She shared the story as well of encountering an 11-year-old prostitute, brought to her attention by another adult prostitute who seemingly expressed concern about the competition. The woman would later tell her that she saw herself in the young girl, and that she’d thought if anyone could save her, the church could.

“Sometimes we forget the power and the purpose of the church,” Rev. Fowler said.

“We are call called to make a difference,” she said in conclusion. “Sometimes sacrificially.”

The Retirement Celebration offering Saturday was to be taken for Cass Community, and Rev. Fowler’s Tiny House Homeless Project was among Saturday afternoon’s Teaching Sessions.