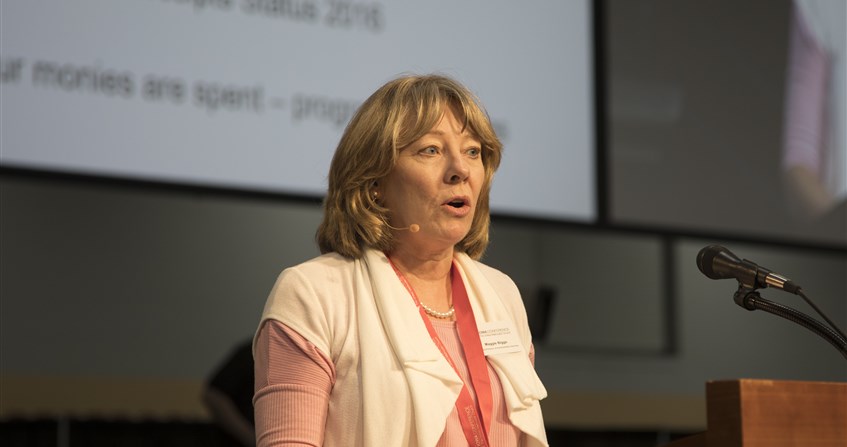 June 10, 2017
share
Maggie Biggs presented the Treasurer’s Report and 2018 working budget on Saturday at the Annual Conference Session. Biggs was officially approved as Conference Treasurer by a voice vote in advance of her the presentation.

She detailed for Session attendees the Iowa Annual Conference and budget process, statistical data, the 2018 working budget, apportionment receipts for 2016 and how Conference monies are spent.

Biggs began with the analogy of the Iowa Annual Conference as an automobile with various parts, before listing aspects of Conference operations in and out of the Conference Center.

Biggs said, “Just as the gears on a car make the wheels turn, it is the 30 some boards, commissions, and councils that keep the work of the Conference moving forward, each with specific areas of focus that help United Methodists live out John Wesley’s belief that we “look upon all the world as [our] parish…”

She noted that the Conference provides services to the connection that allow the boards, made up of more than 300 dedicated members, to focus on their key area of ministry.

“Like the steering wheel on a car,” Biggs said, “the body called the Iowa Annual Conference controls the direction that God leads us to be here in Iowa. You provide oversite over the vision of the Iowa Conference and all its mission and purpose.”

“And just as the car engine can’t run without fuel,” she said, “the local United Methodist Church is the fuel and the foundation for making disciples of Jesus Christ for the transformation of the world. Each local church strives to conduct ministry in its respective area and each serves the community where it is located. This is where the critical work is done; where the rubber meets the road.”

Biggs ran down the Annual Conference budget process, and provided statistical information on the Conference. The statistics came from five crucial areas during the period from 2012 to 2016.

Worship attendance numbers were down to 1,867 in 2016, a trend like all mainline denominations, she said.

Evangelism figures, or the number of people who have joined the church by profession of faith, saw some decreases for 2015 but were up by 24 for 2016, Biggs said. This result drew applause from those at the Conference Session.

Spiritual Formation measures the number of small groups, Sunday school classes, and Bible studies. There was a steep decline for 2012 through 2014, a slight increase in 2015 and then down by 2,053 for 2016.

The Missions figures are the number of people from congregations engaged in local, national, and international mission and outreach ministries. Biggs said this has been going up each year and is up by 2,391 for 2016, which also garnered applause.

The Stewardship figure is the total amount given by congregations to other organizations for the support of benevolent and charitable ministries. It includes apportionments paid and support for United Methodist and Non-United Methodist organizations. The Stewardship number hit a peak in 2013, said Biggs, and then somewhat leveled off in 2015 and 2016. It is down by $782,521.

Biggs then discussed the 2018 Working Budget.

The Apportionments budget dropped for 2015 and significantly for 2016 and then again in 2017, Biggs said, “This was because of many listening sessions throughout the state and staff and all parties wanting to lower the budget as much as possible.”

However, she continued that in the desire and exuberance to lower the apportionment budget over the last two years, there were some unrealistic estimates of how low costs might be and some areas may be a challenge to come in at budget for 2017.

“A couple of those areas are the Board of Trustees with the Conference Center and some district office budgets,” said Biggs. “The 2018 budget adjusts some of these areas.”

She went on to explain that after ministries prepared their initial budgets, the Conference Board of Pensions reported that the Conference health insurance provider was expecting a higher percentage increase than the assumptions used to prepare our budgets last fall.

The decision was made to increase those line items in the budget to align with the potential health insurance increases.

This included district and cabinet funds, Episcopal funds, pastoral care fund, CFA and CCMC funds and then the Board of Camps on the Mission side of the budget. So those boards reflect bigger increases over 2017.

“Many individuals, staff and volunteers, helped put this budget together with a goal of reflecting the best estimate possible of the cost of programs for the current structure of the Iowa Annual Conference,” stated Biggs.

She then listed Apportionments received by Iowa Conference.

“There has been a slow progression of receiving less in apportionments,” she stated. “The percentage received has dropped significantly since 2013.”

“The hope was that as apportionment asking levels dropped, payment rates would increase,” continued Biggs. “Even though there was a concerted effort to lower the budget, that has not proven to show up in increased payment rate of apportionments”

Her final report was on is how our Conference monies being spent.

Other support is 11% of total expenses.

This includes staff for Justice for our Neighbors (JFON), some CCMC, and grants for Thanksgiving Ingathering and District Hunger Grant.

One of those is general and administrative at 21%, including such things as Conference Center and other staff, facilities overhead and buildings and grounds maintenance. And the last is fundraising at .5% of the total expenses, which encompasses Thanksgiving Ingathering & Builder’s Call.

“In summary, I want to say that even though I’ve presented some less than rosy information regarding how the Conference has been doing, I as your Treasurer am very optimistic and encouraged by the changes I’m seeing in the Conference and especiall with the Leadership of this Conference, Biggs concluded. “I hope that you pay close attention to some of the changes occurring and become involved when you next have an opportunity.”