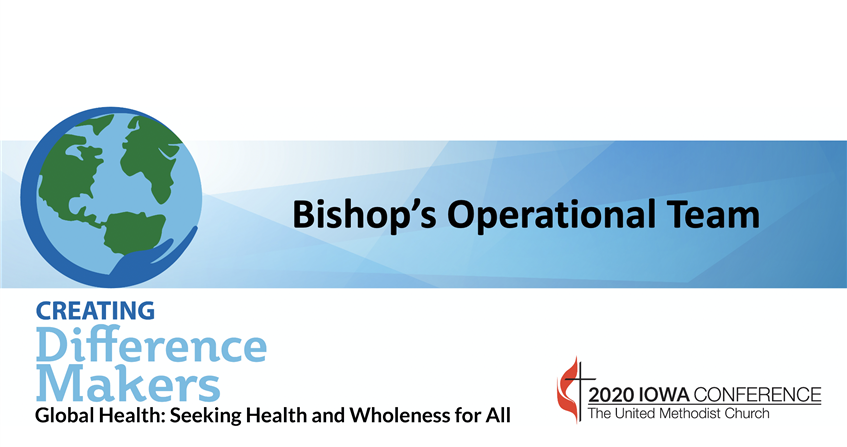 “Last Fall Bishop Laurie led us out into the Conference to ask the question, ‘What would our Conference look like if we could start over designing it around our strategic priorities, our mission, and our vision in today’s context?’” said Tritle.

The listening sessions (called Vision 2032) were held in each of the Iowa Conference’s eight districts and attendees were asked what excited them about the future and what are our challenges now and in the future?

“We tried hard to listen. We collected what we heard you say and worked with the Appointive Cabinet to formulate proposals that we took back in a second round of listening sessions with Bishop Laurie to test what we heard,” said Tritle.

At the Vision 2032 gatherings, the top desire was to build leadership skills in clergy and laity alike closer to where they minister. In addition, there was a desire to empower more direction and leadership closer to the local church. A chief concern was the anxiety about the future of the United Methodist Church and the hope of being in a deeper relationship with each other.

“We know the world around us is changing and noted that people are feeling lonelier and more anxious. Those anxieties were exacerbated by the COVID-19 pandemic and the growing realization that we must do something about systemic racism and the immeasurable harm inflicted upon people of color, especially in the black community,” said Tritle. “We recognize a spiritual disease with remaining silent and inactive in response to the systemic issues that confront us.”

The Appointive Cabinet has already begun implementing a missionally directed appointive system with clear expectations for congregations and the pastoral leaders appointed or assigned to them.

Working with Staff-Parish Relations Committees to develop three to five areas that need attention and focus to move the charge forward in the mission of Making Disciples of Jesus Christ for the Transformation of the World, Superintendents brought those expectations back to the Appointive Cabinet where potential pastors were identified by their gifts and abilities to meet those expectations.

When pastors were called, the Superintendent focused on those expectations and the pastors affirmed or clarified their gifts for them. In the introductory meeting, those expectations were again re-enforced as the basis of the appointment.

In August, Expectation Workshops will be held to formulate those expectations into strategies called Ministry Action Plans and those will be implemented through one to three years.

“Our pastors will collaborate with their Superintendent for support and accountability in meeting those expectations with the charges to which they are appointed or assigned. It is hoped this ongoing focus will increase leadership capacity and effectiveness,” said Tritle.

One caveat is the capacity of Superintendents to do this effectively with all the clergy under their supervision.

“The voice of Jethro as he counseled Moses echoes today: ‘You will surely wear yourself out, both you and these people with you. For the task is too heavy for you; you cannot do it alone.’ Exodus 18:18 NRSV,’” said Tritle

In the early days of Methodism Bishops and Superintendents established circuits where pastors were appointed to go and develop ministries (Societies) where they would identify gifted laity who they trained as leaders of the Societies, classes, and bands where people were developed as disciples of Jesus. They shaped much of the society around them.

Circuits were multiplied when the number of leaders supervised exceeded the capacity to supervise them. These relationships of ongoing support and accountability to life in Christ was what defined the “Connexion”.

The BOT believes God is calling us to rediscover this connection.

The Appointive Cabinet is identifying potential circuits and with a Transition Team of Superintendent Paul Wilcox, Directors Lanette Plambeck, Jaye Johnson, and Bill Poland. They are consulting first with pastors then with lay leadership to share the L3 model of Loving God and each other, Learning together in swiftly changing time, and Adaptive Leadership.

This Discipleship model of Loving, Learning, and Leading will be used by the pastoral leaders of the circuit meeting with a team of clergy and lay circuit leaders for eight hours each month.

The team will start with a smaller group learning from them and applying those learnings as more circuits are formed. Training for the circuit leaders will begin in September with the next group of pilots. The Superintendent will meet monthly with the circuit leaders for continued prayer, support, and consultation.

The goal is that the Ministry Action Plans derived from the three to five missional expectations focused on deepening faith, outreach ministries of witness, mercy, and justice (personal and social holiness) will be shared with the Circuit Leaders and other members of the circuit.

Moving forward on these Ministry Action Plans will be the leading focus of the circuit and heart of the consultation of Circuit Leaders with the Superintendent. As needs are identified, it is our intention that supports, and deeper learning would be resourced by the Superintendents and Ministry Directors. More than that, it is the hope that learnings and best practices developed in the circuit would be shared with other circuits.

For all of this to work effectively the Conference must be conscious of our leadership capacity.

“Leadership professionals tell us what Jesus practiced: the highest number an extremely gifted leader, like Jesus, can supervise is 12. For most, the number is seven to ten. To have a significant impact the number is three,” said Tritle.

Responding to what was heard during the listening sessions, BOT is recommending a reduction to five districts with district boundaries based upon the number of pastoral leaders that would be in each district.

With a goal of 10 leaders to each circuit, there would be approximately 10 circuits in each district. That is 10 pastoral leaders that each superintendent would oversee directly. Some of the missional oversight, the implementation of missional expectations, that is the Ministry Action Plans, would be delegated to the Circuit Leaders who will be trained for this function.

“We believe with a Circuit Model of Leadership we can build trust, increase missional effectiveness, and deepen our leadership pool with a smaller number of districts and shared oversight,” concluded Tritle.

Action Item #701 is recommended by the BOT to reduce the number of districts serving the churches of the Iowa Annual Conference from eight (8) to five (5). The reduction in districts will take effect on July 1, 2021.