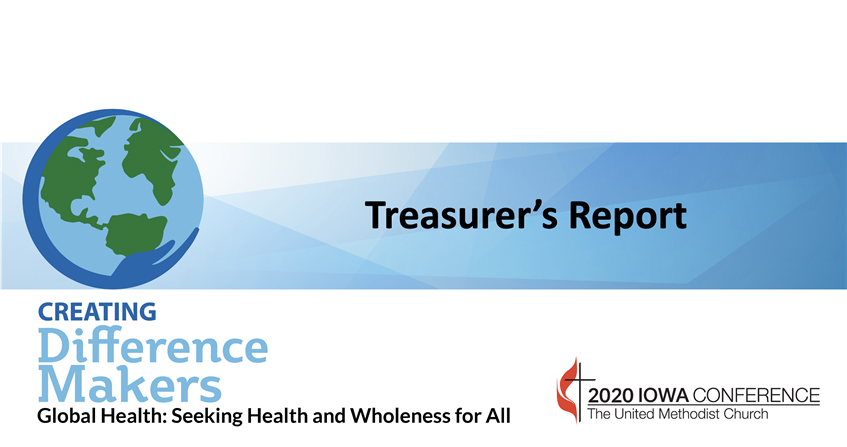 Biggs shared statistical information about the Iowa Annual Conference, the 2021 Budget, and highlights from various components within the budget, a breakdown of apportionment receipts, and recent actions by the Council on Finance and Administration.

Biggs shared the following statistics:
Biggs went on to look over the 2021 Budget which is found on page 16 of the Pre-Conference Manual.

Next, Biggs showed a recap of the 2021 budget. She explained that there are some significant changes from the 2020 budget. The total for the 2021 budget was $9,724,498. It is a reduction of $3.4 million or a negative 25.9%. She explained some of the elements that have allowed for such a large decrease.

“This change is occurring at a time when cash reserves are decreasing and there are many uncertainties in our Conference. For this reason, every local church must be dedicated to paying 100% of their apportionments,” said Biggs. “I'll say it has provided funds for programs so that they could rely upon their full budgeted request and not rely on any cushion in their budget. Now, it has been shown as a separate line item, as I indicated in the budget. This provides transparency in the fact that not all churches pay 100%. It affected the local churches in that it did increase the Apportionment budget in total. Removing it lowers some church apportionments but also makes operations of the Conference and programs rely on cash reserves to make up the difference when churches do not pay 100%.”

The second element that is allowing for a much smaller 2021 budget is CFA's recommendation for a change in a standing item, which is Action Item 105 on page 20 of the pre-conference manual. CFA has traditionally held the long-standing opinion that the Iowa Annual Conference should set the example by paying 100% of General Church Apportionments each year.

CFA is asking for a change in that standing item so that this decision is put into the hands of each of our local churches. This would be removing the requirement that the Iowa Annual Conference pay 100% apportionments to the General Church. Those funds sent in from local churches specifically for the line item General Churches Apportionments would be passed along to the General CFA.

As has been the case over the last many years, the budget has been reduced because of cost-cutting measures. The leadership team of the Conference has been working toward reducing the costs of doing the business of the Annual Conference. These cost-saving items have included running the Conference Center building as efficiently as possible, eliminating or reducing services, reducing cleaning services, having less trash pickup, consolidated job responsibilities, foregoing pay raises, reducing staff positions, eliminating district offices and restructuring services provided by the Iowa Annual Conference.

Biggs went on to detail the percent that the Iowa Annual Conference receives in apportionments from local churches. In 2019, the number who paid 100% by the deadline was 399.

“We know that most churches want to be connectional and do believe in the importance of our worldwide connection, yet are struggling as older congregations, high repair costs to buildings, winter storms, flooding, and worldwide pandemics affecting attendance and giving,” said Biggs.

Earlier this year, CFA initiated the use of a policy that is called the Contingency Plan. This plan calls for reducing expenditures by the Conference, as a whole, except for the main operating expenses where possible.

The Conference also applied and received a Payroll Protection Plan (PPP) loan for $1.2 million in May of this year, which came at a time when the Conference was very uncertain of the impact of COVID-19.

In combination with the previous challenges facing our Conference and denomination, the Iowa Annual Conference is following the guidelines and working toward making the PPP loan forgivable under the Small Business Association’s rules. It is hoped that the forgivable loan will strengthen the Annual Conference at an unprecedented time.

“You are being asked today to consider the standing rule change and to act on the 2021 budget as recommended by CFA,” concluded Biggs.

Allen Allard, laity, made an amendment to Action Item #105 asking to restore the language on lines 44-45 which had deleted, “The budget format will be presented showing the estimated uncollectible amount of apportionments.”

The Allard Amendment failed to pass with a final vote of 198 yes to 475 no.