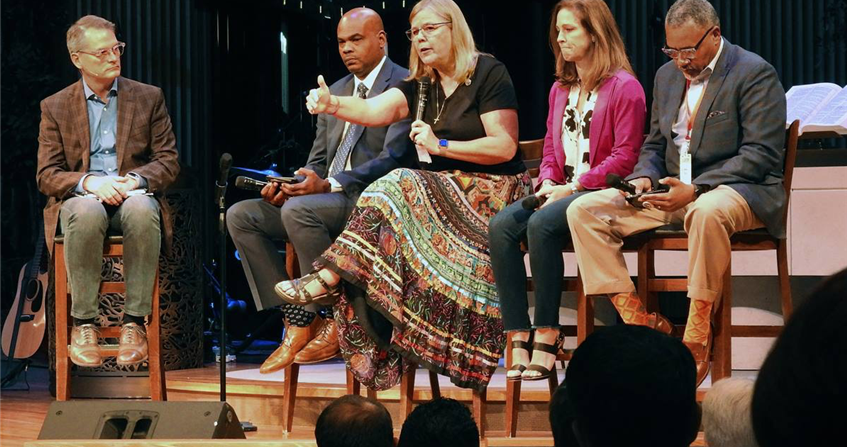 Pat Luna speaks during a panel discussion at the Leadership Institute, held at the United Methodist Church of the Resurrection in Leawood, Kansas, Sept. 25-27. She was joined by the Revs. Adam Hamilton, Junius B. Dotson, Ginger Gaines-Cirelli and Michael Bowie. This year’s event focused on preserving, but reforming The United Methodist Church. Photo by Sam Hodges, UM News.

A typical Leadership Institute at the United Methodist Church of the Resurrection offers advice to church leaders of various denominations for growing their congregations in size and mission work.

With The United Methodist Church actively entertaining the possibility of a breakup, due to longstanding divisions over homosexuality, Leadership Institute 2019 turned into a centrists’ and progressives’ forum for discussion and strategizing about the denomination’s future.

“It’s about: Who are we, and who do we hope to be?” said the Rev. Adam Hamilton, senior pastor of Church of the Resurrection, the denomination’s largest U.S. church in attendance.

The Rev. Junius B. Dotson’s address included video clips highlighting the denomination’s moves toward integration and acceptance of women as clergy, and underscoring that the 1968 formation of The United Methodist Church occurred in a tumultuous era in U.S. history.

Dotson said many in past generations stuck with — but also strived to change — The United Methodist Church and its predecessor bodies. He called on the crowd attending the 21st annual gathering of the Leadership Institute to do the same.

“I refuse to lose faith in our future because I have seen our past. We need only to learn from it, and to confront our historical blind spots,” said Dotson, top executive of the United Methodist Board of Discipleship.

Teaching about church leadership still went on, mainly in the pre-Institute sessions on Sept. 25. Jennifer Della’Zanna beamed after sitting through one titled “Church Unique: Strengthening Your Culture for Real Church Growth.”

“I just texted my pastor. I said, ʽI think there’s a year’s worth of sermons in this,’” said Della’Zanna, lay leader at Linden-Linthicum United Methodist Church in Clarksville, Maryland.

But even the leadership instruction took on an air of crisis management.

“Everyone is asking some version of the same question, and that is, ʽWhat’s going to happen and how do I lead my church in the midst of it?’” said the Rev. Matt Miofsky, pastor of The Gathering church in St. Louis.

The institute’s best-known speaker was David Brooks, the New York Times columnist and best-selling author, who did offer a word about United Methodism’s travails.

“All I can do is give you an outsider’s perspective and say you’re not alone,” Brooks said. “The pain and tension and separation impulse that’s in the Methodist Church is in a lot of organizations.”

The precipitating event for this special Leadership Institute was the 2019 General Conference, held in February in St. Louis, to address schism-threatening division over homosexuality.

Most bishops, as well as Hamilton and many other U.S. church leaders, supported the One Church Plan. It would have removed the church’s official teaching that homosexuality is “incompatible with Christian teaching,” and given churches and annual conferences latitude on same-sex weddings and ordination of openly gay individuals.

But by a vote of 438-384, the 2019 General Conference approved the Traditional Plan, which kept the “incompatible” language and reinforced the church’s ban on same-sex weddings and ordination of gay clergy.

The swirl of events since then has included growing resistance from unhappy churches, including withholding of apportionments. Talk has intensified about whether the denomination should separate, and if so, how.

Hamilton was part of small meetings of centrist and progressive leaders, which led to the creation of a group called UMCNext and to a much larger, closed-door strategy meeting at Church of the Resurrection in May.

That yielded commitments by UMCNext to reject the Traditional Plan and work for ending discrimination against LGBTQ persons in the church. It also jump-started the organizing that led to the election of more progressive U.S. conference delegations for General Conference 2020, said the Rev. Stan Copeland, a UMCNext convening team member.

It was as centrists and progressives organized last spring that Hamilton announced the next Leadership Institute would be a big, open meeting devoted to preserving but reforming United Methodism.

After one session this week, he noted the scarcity of traditionalists, many of whom have called for amicable separation into different denominations.

“Anybody could come, but we anticipated the people who would be coming here would be the folks saying, ʽI’m not leaving. This is my church,’” Hamilton said.

Just before the meeting, UMCNext posted online its package of petitions for General Conference 2020. The plan calls for a continuation of The United Methodist Church, and would remove from the Book of Discipline the exclusionary language and provisions regarding LGBTQ persons.

The plan also would ease the departure process for churches or groups of churches that disagree.

The Rev. Tom Berlin, part of the UMCNext convening team, briefed participants on the plan. He acknowledged challenges, including attracting enough votes from African delegates, who strongly supported the Traditional Plan.

The Leadership Institute crowd also heard about the Indianapolis Plan, devised by a team of centrists, traditionalists and progressives. That plan foresees a clear break into two or three denominations, with centrists retaining “legal continuance” of The United Methodist Church.

“People say it’s a plan of dissolution,” said the Rev. John Stephens, who helped draft the plan and spoke about it. “It’s not.”

The meeting included speakers on LGBTQ inclusion, such as Jan Lawrence, executive director of the Reconciling Ministries Network. Indeed, the gathering became something of a teach-in on the struggle for African Americans, women and LGBTQ persons to gain equality in the church. Speakers noted various milestones of progress, but also persisting racism and sexism.

“Women have to work overtime, sometimes for years, to get what men receive upon arrival – that is, simply, the honor of being taken seriously,” Gaines-Cirelli said.

She added that the denomination’s current struggles present an opportunity for a new commitment to attacking discrimination of all kinds, including against women in ministry.

Some complained that the institute’s group of speakers was not diverse enough, and other tensions emerged, such as when Iowa Conference Bishop Laurie Haller spoke as part of a panel of episcopal leaders asked to share their vision of the denomination in 2032.

Haller said she was sure that by then the full inclusion of LGBTQ persons would be a non-issue. But as she wrapped up, she was interrupted by a few crowd members who called out, “What about Anna?” — a reference to the Rev. Anna Blaedel, who faces a church trial as a “self-avowed practicing” gay clergyperson in the Iowa Conference.

The Rev. Gregory Gross, a Northern Illinois Conference deacon, was one of those who called out from the audience.

“(Haller) was talking about her hope of inclusion in 2032, but she has the opportunity to work for inclusion more effectively in 2019,” he said.

Bishop Kenneth Carter, president of the Council of Bishops, was another episcopal leader who spoke. He said he had felt the defeat of the One Church Plan as a kind of death.

But he sought to counter the traditionalists’ argument that biblical faithfulness requires the church’s current stance on homosexuality.

“Faithfulness is not standing in place. It is a path, and we are walking in the light of God,” Carter said. “We are not there yet, but I have seen the emerging church, bold and faithful, free for joyful obedience. I have seen it, and I see it in you.”