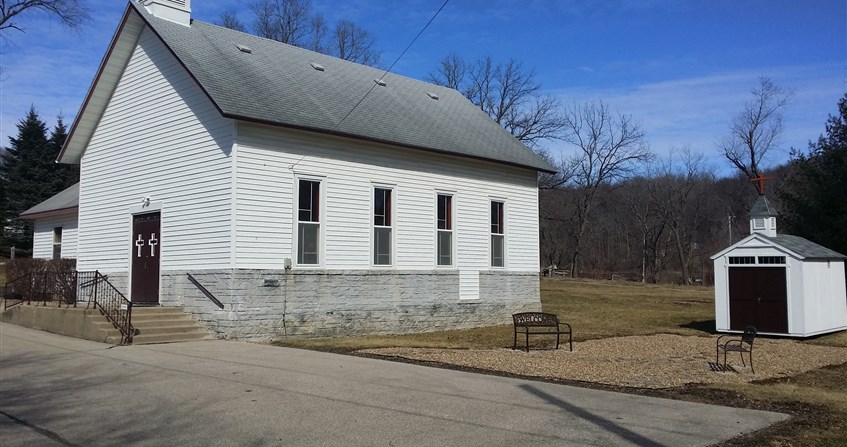 Just outside of Cedar Rapids is the small township of Bertram, once a railroad town and now the center of a sprawl of new housing developments. “The church in the town is the only institution,” says Bertram UMC pastor Jenny Seylar. “And part of being the only institution is that a lot of people in the town claim the church as their church, although our worship attendance is 25 to 32 on any given Sunday. So we see a lot of people come to our events, we see people come to our special things at the church, but we don’t necessarily reflect that as much in worship.”

So the challenge, explains Rev. Seylar, is to connect downtown Bertram with these new residents living just a stone’s throw away. “The church is the center of town, and yet not completely part of these other development areas that are partially in the town.” That’s why Bertram UMC turned to the Healthy Church Initiative.

Improving on Their Strengths

“They know they are the only institution in town, and
being the only institution in town, they take pretty seriously their call to be relevant in the community,” says Rev. Seylar of her congregation. “And before we even started the Healthy Church Initiative, they were already hosting nearly one event a month for the church, and bringing in people from the community in an effort to just build relationship with them.”

So HCI did not make the church start from scratch, but rather helped build on their strengths. “It’s not a canned process, it’s tailor-made for the needs of the church and the congregation,” notes the reverend. “The process validated that which we were doing well in ministry, and took what we were doing well and said ‘Here are some next steps for you.’”

The HCI process helped the people of Bertram UMC think differently about ministry. “They became very intentional about the ministry that they were doing. I was using words with them about being intentional and how we’re going to build relationships, not just haphazardly, but real intentionally. And they started using that language and started picking up on that and looking at our mission and vision and saying ‘Does this really help us?’”

Reaching Further Out to the Community

“We talk a lot about building relationships. Not so that there’s butts in the pews, but building relationships so that people know Jesus Christ and know that the people of the Bertram church are people of love and grace and are open. I think that they’ve done that really well. Another thing that they’ve done really well as a part of the process,” Rev. Seylar points out, “is they’ve really started connecting people. Where we started out at a disadvantage with our town proper and the development areas, as a result of the Healthy Church Initiative we’ve been able to build some relationships with folks in those developments. We’ve seen some real fruits with that, and it’s been a joy to watch that happen with them.”

The impact on the community has already been noticeable. “The community realizes why we’re there. They see us as having good motives,” she says. “We’ve basically said, we want to plant trees with you because the town needs to plant trees, and we want to partner with the city for our homecoming because we want to do this for the city. Our motives are about building relationship, not about putting money in the plate at the church. Because that was a bit of the perception in decades past, is that the church just asked for money. We’ve been real intentional about not asking for money.”

Building that trust has actually made people more willing to donate, unasked, and most importantly has brought new people to the church. “We kept saying if we had five more families connected to the church, some of the things that we would like to do in ministry that cost money, we could overcome some of those. And in looking back at our finances last year, we said ‘Oh, I think we got our five families, and look at how the giving is up’,” says Rev. Seylar.

“But we didn’t connect it to the fact that there’s money in the plate, we connected it with that we’ve made these relationships – solid relationships of people worshiping regularly and helping in some of the ministry events that we do outside the church.”

One of Bertram’s prescriptions from HCI was to remodel their church and address its space issues. “We had a desire to bring it back to its 1866 look, while updating all the amenities so that things worked better,” explains the reverend. A volunteer team from Matthew 25 came out and helped them improve the space by taking out some old dividers and putting in flexible seating, increasing their seating from 45 to 70, as well as changing the lighting.

“It’s beautiful. But I think the thing that captures most what that process did is on Sunday morning, the way the sun comes into the church. The back door has two cross windows, and the way the light comes through those cross windows is they illuminate up the side of the wall that used to have the divider on it,” she says. “Sometimes we’ll have two crosses, or five or six or seven, and we’re not sure where they come from, because there’s only three total crosses in the back of the church. We decided not to put anything on that wall, because it’s the palette for our crosses. That is kind of our decorating motif there is whatever the crosses do on Sunday morning.”

It just goes to show how effective HCI is at recognizing each church’s unique needs. Obviously building relationships is critical, but even a church remodeling can have a powerful effect on people’s feelings about the church. “What people continue to name is how the remodel of the sanctuary has deepened their worship experience and allowed them to worship more fully,” says Rev. Seylar. “And when new folks come in, they’re in awe of the beauty of this tiny little sanctuary. So it’s been a great process, and it all happened because people took a chance.”