Big changes at UMCOR and for next year's Ingathering 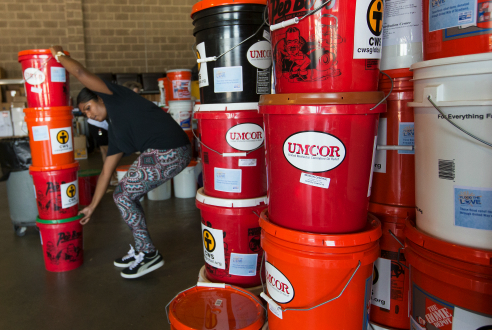 September 19, 2017
share
By Audrey Young, Iowa’s General Secretary for the Iowa Board of Global Ministries

It may be a good idea to bring all leftover bulk items for kits to our 2017 Ingathering, rather than holding anything over for 2018, as is the custom of some local churches. “We have been assured UMCOR will accept all of our kits from our 2017 Thanksgiving Ingathering this year. The book for next year, 2018, will reflect the changes,” stated Dan Houston, Iowa Ingathering Chairperson.

Relief Kits include the following: Other kits have already been removed from the UMCOR website.

UMCOR is currently asking United Methodist's to, “Help us restock relief supply kits!” with kits brought to Ingatherings this Fall or offerings for UMCOR to buy relief supplies. Relief Kits are those most needed because of recent hurricanes in the U.S. and to help restock the shelves for upcoming disasters. Being prepared has always been a hallmark of UMCOR. Beginning in 2018, these three Relief Kits will remain in the U.S., so there will no longer be need to remove or cover patriotic symbols, such as flags.

The biggest change at UMCOR, beginning January of 2018, is the obvious difference between international and U.S. missions work. The UMCOR website states: “International distribution of relief supplies will be discontinued by December 31, 2017. Instead, Relief Grants will be offered to international partners to allow for local purchase and assembly of kits which are more culturally appropriate.” Therefore, the three above-mentioned UMCOR Relief Kits will be distributed only in the U.S. after January 1, 2018, by UMCOR.

In recent years, Iowa has sent kits and items through the work of cooperating depot, Midwest Mission Distribution Center, Chatham, Il (MMDC). They receive our items in their truck at Annual Conference. MMDC Board states, “Even though UMCOR is discontinuing the Layette, Sewing, Birthing and Bedding kits, MMDC will still be sending them as a MMDC kit. MMDC has other agencies that still want them and we will continue to take the kits.”

Regarding the UMCOR decision, Iowan Katie Dawson who serves on the General Board of Directors for Global Ministries and the Secretary for the Board of Directors for UMCOR, stated, “Sometimes in-kind donations aren’t the best way for us to be in ministry with another community. One of the realities is that when we ship kits into a country, we are flooding their market with free products and impacting local economies. UMCOR and United Methodist churches alike, are seeking ways to buy items in-country for that reason.” Dawson added, “And because the kits are so regimented, they also don’t always adjust well to cultural realities in a given place. This (change) will allow communities to get items that are appropriate to their context.”

“I am pleased to see this action by UMCOR. This action is in line with new concepts of helping people in ways that also support local economies and local decisions. Good for UMCOR!” stated Judy Marnin, Iowa Conference Advocate for In Mission Together 50/50, something we’re going to be seeing and hearing more about in detail in the near future.

Mary Morris, Chairperson of the Iowa Board of Global Ministries agreed, “Our people love and enjoy preparing kits. But sometimes what we send is not the most useful in their location and if the organization involved could buy things there, it would help the local economy.” She added, “We spend a lot of money on shipping expense both through UMCOR and to Nigeria.”

As an example is Iowa’s mission work with Nigeria, thousands of Iowa dollars are spent to lease sea containers, pay for shipping and custom fees here and abroad, as well as soliciting volunteers here and folk in Nigeria to properly receive and transport items to areas where needed. That is part of the reason it was previously announced, “There will be no Iowa-Nigeria Partnership Kits at this year’s, 2017 Ingathering. UMCOR kits have not changed except that birthing kits are not currently needed.”

UMCOR spends 100 percent of designated donations on the projects donors specify. When UMCOR donors give their time, money, and supplies, they join UMCOR as the hands and feet of Christ. Administrative expenses are paid through Apportionments and through a UMC Special Offering titled, “UMCOR Sunday” usually held in March, and formerly called “One Great Hour of Sharing.”

UMCOR provides humanitarian relief and disaster response in the United States and internationally. Our efforts are targeted in places where natural disasters, war, or conflict have done so much damage that communities are unable to recover on their own. While UMCOR is not a first-response organization, we stand ready to accompany communities in need over the long haul of their recovery, until they are well on their way to establishing a “new normal” after a crisis.

Our work is informed by global initiatives such as the Millennium Development Goals, the post-2015 development goals (in process), Sphere Standards, and best practices with regards to facilitating sustainable solutions, measuring impact, and evaluating approaches. We seek to alleviate human suffering without regard to race, religion, gender or sexual orientation. We believe all people have God-given worth, dignity and a right to assistance when in need.