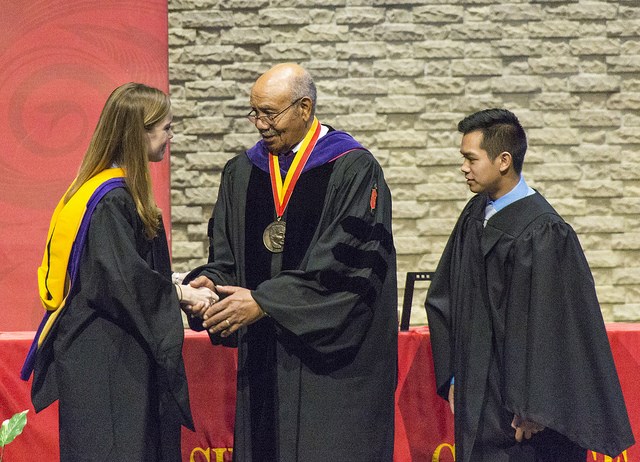 Bishop Melvin G. Talbert received Simpson College’s prestigious Carver Medal at a ceremony at the College on January 27, 2016. In accepting the honor, Bishop Talbert noted that the medal is named for inventor and scientist George Washington Carver, who was admitted to Simpson at a time when black Americans were often denied access to higher education.

Bishop Talbert delivered a timely lecture entitled “The Intersection of Oppression and Privilege,” offering a reminder that all these years later, our society still has a long way to go in overcoming its many biases.

In his introduction, Simpson College president Jay K. Simmons said of Bishop Talbert, “During his college days, he shared in planning the first student sit-in demonstrations in Atlanta in 1960. The Reverend Dr. Martin Luther King Jr. joined the students, which led to their being arrested. Bishop Talbert spent three days and nights in the same jail cell with Dr. King, an experience that he says changed his life forever. Bishop Talbert has served the United Methodist Church in a variety of roles and locales, and in many of these cases, he was the first African-American to do so. He has been a pioneer his entire life.”

A Lifetime Struggle Against Oppression

After thanking Simpson College for the honor of receiving the Carver Medal, and admitting that he would only be able to scratch the surface of the issues he had on his mind, Bishop Talbert began his lecture stating that, “The intersection of oppression and privilege is a reality for all of us. The question is, how do we embrace that reality in a way that fosters the beloved community envisioned by Dr. Martin Luther King Jr, and of course by George Washington Carver? After prayerful reflection, I came to the conclusion that the most helpful way that I could do this was to share from the perspective of my experience as a person of color, one who has known oppression. My oppression had to do with race, an African-American born and lived through a time when Jim Crow was the reality and my church sanctioned that oppression.”

Referencing the book Set Free: A Journey Toward Solidarity Against Racism, the Bishop explained that although everyone has racial prejudices, racism is “prejudice plus power.” He recounted his own painful memories of the ‘Whites Only’ signs he faced decades ago, his non-violent battle against the immoral laws of ‘separate but equal,’ as well as the racist rhetoric coming from political candidates even today. “The oppressive power of racism is what we see and experience. It is the visible acts that are a part of a larger system that says people of color are not human.”

Recognizing the Sacred in Everyone

However, Bishop Talbert made it clear that racism is not our society’s only terrible ill where prejudice is concerned. In his talk, he focused on three of the greatest prejudices plaguing us today – racism, heterosexism, and sexism – noting that they occur at three distinct levels: individual, institutional, and systemic. A gay bashing, for instance, would be an individual manifestation of heterosexism, while the church refusing to ordain gay people would be an institutional example. Only showing straight people and their lives in literature and magazines is a systemic manifestation of heterosexism.

The Bishop admitted that he was once homophobic himself, until a time in the 1970s when he attended a weekend event where a mix of straight and gay people were invited, but no one was to reveal their sexual identities until the end of the weekend, after everyone had had time to get to know one another. “When the time came for us to reveal our sexual identity, I was blown away. All of my stereotypes were shattered!” said Bishop Talbert.

“I had met some of the finest and most gifted persons I had ever met. But I did not characterize them correctly. That was the beginning of a journey that enabled me to become a part of who I am today,” he continued. “Homosexuals and heterosexuals are persons of sacred worth and must be granted their full human rights.”

From Fear to Redemption

Turning to sexism, Bishop Talbert described how this particular evil reaches across all races and cultures, manifesting itself everywhere from the family to the political arena. He also spoke of his own experience with churches that claimed they did not want a woman pastor: “The cabinet and I had a strategy for dealing with such reports,” said the Bishop, explaining that “if the bishop and the cabinet concluded that the person possessing the gifts and the graces for leading their congregation was a woman, that request for not receiving a woman would not be considered until after they had a consultation with the person we had selected as the best possible choice for that congregation. I’m pleased to report that my cabinet and I never lost a case. For you see once people come face to face with the unknown, that is another human being, something magical happens. The human dynamic of love and grace turns fear into redemption.”

Throughout the lecture, Bishop Talbert emphasized that whatever our race, gender, or sexual orientation, we are all part of the human family, the family of God. We are all made in His image. And, mincing no words, the Bishop made it clear that racism, sexism, and heterosexism were all attempts to usurp the authority of God.

“My sisters and brothers, from the beginning, evil existed in the world. And you and I know that there are lots of evils lurking in our lives today,” said Bishop Talbert as he brought his talk to a close. “As people of faith, we are called by God to be part of a force for good in the world, so that evil will not triumph. It is my prayer that God’s spirit will prod us into being active agents for the common good of all. And may we use all our resources, all of our power, to eradicate the sin and evil of racism, heterosexism, and sexism from all of our relationships in society, in our churches, and especially in our education institutions. God bless you.”

*Rev. Dr. Arthur McClanahan is the Director of Communications for the Iowa Conference.  Brooke Pierce is a freelance writer member of the Communications Ministry Team.