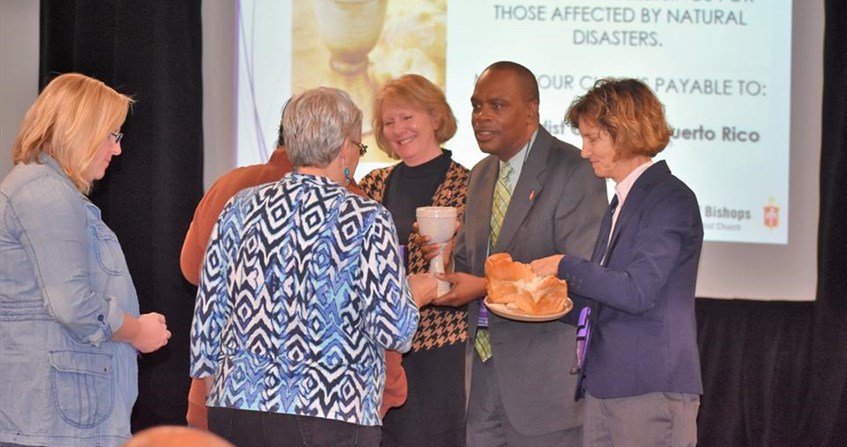 DALLAS -  What is the Christ’s way forward for doing mission and ministry in the worldwide United Methodist Church? That is the question bishops pondered during their February meeting in Dallas this week as they received an updated report from the Commission on a Way Forward.

In the report given to the Council this week, the Commission shared with the bishops two sketches that carry forward many of the values and principles of the three sketches that were presented to the bishops at their meeting in November .

“The sketches of these two models represent the values, concerns and feedback we have received since we reported to the Council in November. The two sketches provide avenues for unity, contextualization and mission,” said Bishop Ken Carter, one of the moderators of the Commission.

The bishops offered feedback but did not vote on the two revised sketches, instead asking the Commission to continue working to prepare a final report to be presented to the bishops at their April/May meeting.

Summary of the sketches of the models

Here is a summary of the two sketches in process.  Details may change based on the work of the Commission at its next meeting.

During this week’s meeting in Dallas, the bishops also heard reports on the impact of both models on pension benefits, the connection, central conferences and fiscal responsibilities.

Council President Bishop Bruce Ough noted that the process of seeking a way forward was grounded in three major values:
1. A renewed attention to our public mission of making disciples of Jesus Christ for the transformation of the world, especially with those who are not yet a part of our churches.
2. A focus on contextuality in a global church, and our continuing call to learn from each other, listen to each other.
3. Continuing to work with traditional, contextual and progressive values that are present in two models, one that is more aligned with a contextual church with the removed language about human sexuality, a second which differentiates between these values as different branches of one church.

At the close of the meeting, the Council of Bishops offered condolences to the family of the Rev. Dr. Billy Graham, the noted evangelist, who passed away recently.

The Council of Bishops meeting began with worship and the presidential address/sermon on Sunday afternoon and ended today, February 28, with a Love Feast.

The Commission on a Way Forward will meet in Los Angeles in a few weeks and then give its final report to the Council of Bishops at the April/May meeting in Chicago.