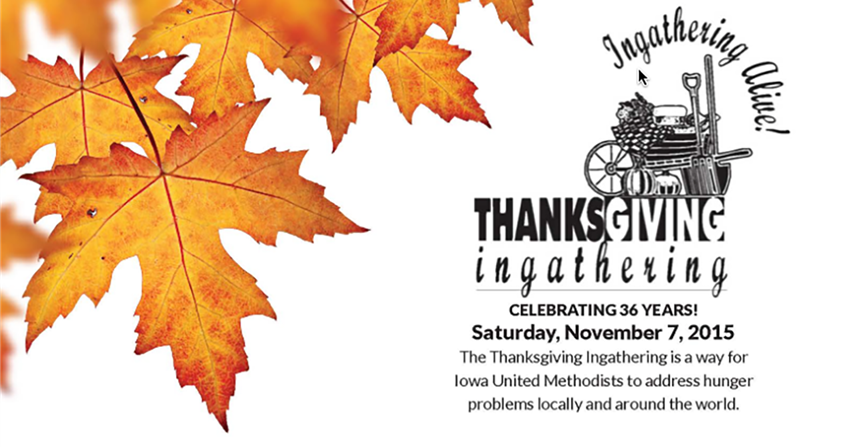 November 08, 2015
share
It was a crisp, fall morning. The crops were in.  The leaves were down.  Steam rose from still lakes.

Congregations across the state, rural, suburban, urban, small and medium-sized, and large, readied what they had been gathering for a year.  Cars, vans, and trucks were loaded. 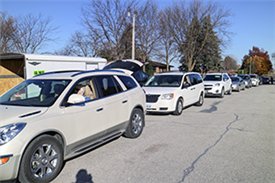 People were getting ready for the 36th annual Thanksgiving Ingathering of the Iowa Annual Conference.

What began in 1980 on the campus of Westmar College with a collection of blankets, kits, animals, corn, and a total of $44,882 in cash and in-kind gifts has grown…from supplying grain and animals for the Heifer Project with an area designed for the “five baas, 3 bunters, 10 hopping multipliers, and a few grunters,” along with a semi load of corn…grew in three years to a second site – Mt. Pleasant.  Within nine years three more were added. “Preacher pies” being occasionally auctioned.  Fabulous quilts became a hallmark of the November event.  And over the years, the first collection has grown well over 2000 percent – to well over $1 million presented in 2014.

Rev. Eric Schubert, pastor of the Greenfield United Methodist Church, described Ingathering as “truly connectional.”  The members of his congregation “eat it up,” he said.  “They put in a ton of work.  They organized a lot.  They did a great job!”  He went on to suggest, “this is one of the truly connectional things” of The United Methodist Church. 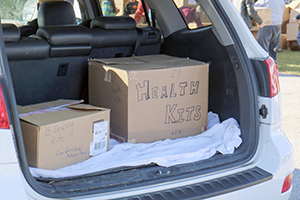 One car it the queue waiting to offload boxes at Greenfield had a container of 29 health kits, marked in big bold outline letters.  When thanked for bringing the kits, the people in the car said, almost in one voice, “We’re so excited to be here, and even more, to do this.  We know that these health kits will make a real difference in people’s lives!”

Others echoed the same sentiment…especially after they received a bag of fresh-baked chocolate chip cookies from Sherry Hallberg.  Sherry, a member of the Van Meter UMC congregation, had been up the night before with a dozen youth backing.  “It’s the least we can do,” she said, “to give them a nice little treat as they’re waiting.” 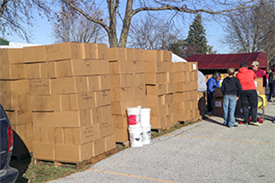 As the morning wore on the boxes were repacked into standard-sized and numbered collections of birthing, health, sewing, school, and layette kits for UMCOR and birthing, layette, tailoring, knitting, and book kits through the Iowa-Nigeria Partnership.  Empty pallets grew to seven-high cubes and another mound of cardboard was cut down and recycled.

By mid-morning, the band was rehearsing in the sanctuary for worship. Presentations offered first-hand glimpses into mission projects, including the Personal Energy Transportation (PET), the “sturdy, hand-cranked mobility cart…specifically designed for the rough terrain found in many countries, particularly in rural areas.”  Fine quilts were on display in the fellowship hall, including one originally crafted in 1986 by skilled quilters of the Anita United Methodist Church.  Rev. Jim Morris reported, “it was originally sold for $450, 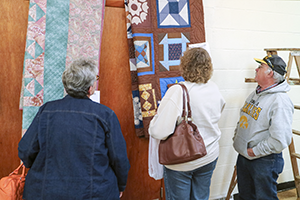 which was a record for the time.  Over the years the original owners passed on and the quilt was given to the Atlantic United Methodist Church, which presented it for the 2015 auction in Greenfield” giving a second life for a fabulous quilt.

Ranee and Gaylen Goettsch, Coordinators/Chairperson for the Thanksgiving Ingathering Task Force said, “We are to do what is right and allow God to lead the way,” in this year’s Ingathering supplement.  “Let us be candles of hope,” they urged, “by being a part of ending hunger and reaching out to those in various need through Thanksgiving Ingathering 2015.” Results from the collections at the five sites are being tallied.  Time will tell if the 2015 Ingathering surpasses 2014’s count of $1,037,046 and if the goal of $1,600,000 is achieved.  Whatever the final count, it “will make a difference to so many all over the world…[they will] be blessed” by the “generous hearts” of Iowa United Methodists they said.