Bringing hope to those in the ruins 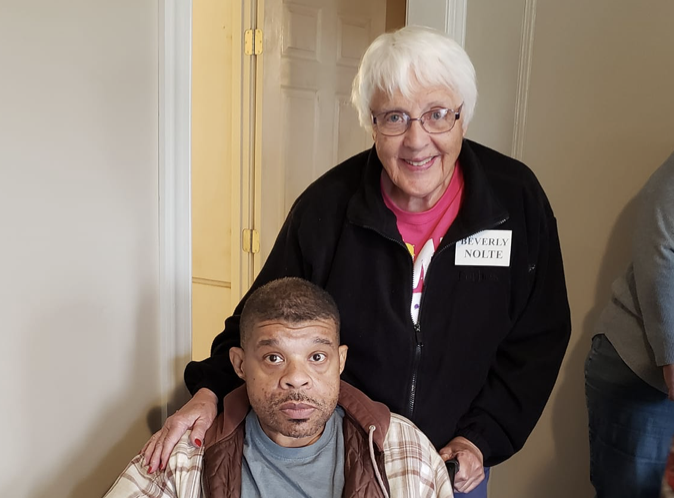 Hurricane Laura slammed the Lake Charles/Sulphur, LA area making landfall on August 27, 2020. Marching in after was Hurricane Delta on October 9, 2020, followed by a deep freeze of 16 degrees, the coldest in Louisiana in 119 years on February 15, that burst pipes throughout the area. Then by a deluge of 18 inches of rain in two days on May 17-18, 2021. And a tornado struck in October 2021, which left around 12 homes uninhabitable and exacerbated the already hundreds of persons feeling hopeless.

From Manning to Wilton, Waukee to Knoxville, 13 Iowans who typically travel abroad for two-week work experiences have been stymied by COVID travel mandates. Bill and Katherine Howell, formerly of Coon Rapids, moved to Florida. Bill interviewed for a position with the Louisiana United Methodist Conference, part of his Disaster Response portfolio. 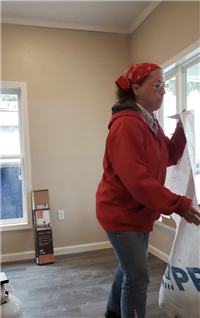 The "A" team organized, held an orientation, discussed travel plans, and headed to the work destination on Saturday, January 8, 2022. We felt called to offer our time and skills in Southwest Louisiana, Lake Charles, and Sulphur. Our team was divided into two groups working with Fuller Center Disaster Rebuilders while housed at the Olivet Baptist Church. The churches in Southwest Louisiana that can help are sharing the volunteers' housing needs. Mennonite Disaster Service and the MDS Disaster Aid Amish group, and Mt. Olive Baptist Church have formed a coalition that allows each organization to bring their gifts to the people. Building supplies, funding, networking with the people, hard labor, and lots of love bring hope to Louisiana's devastated children of God. Healing hearts and homes was our goal.

Ms. Dieci is a grandmother raising two grandchildren in a 100-year-old home destroyed by trees falling onto her roof, followed by heavy rains, which killed her furniture and caused mold. When we arrived, Ms. Dieci's 17 windows were boarded up but, by the time we left ten days later, new windows were trimmed (inside and out), painted, and adorned with blinds hung on our last day of work. There were new countertops, sink, base cabinets, backsplash tile laid in her kitchen, and a microwave hung over her stove and refrigerator waiting to be connected.  If it didn't move, we painted it, inside and out! 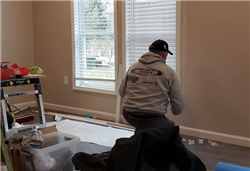 The second team worked with Edward, a single man with a large home. Drywall was hung, mudded, sanded, and then painted. A fresh new floor was installed, with a myriad of other projects completed. This work required working on high ladders, with several workers needed for installing.

A ramp for an elderly woman was built with the help of two team members. Ray, a young man who uses a wheelchair and has diabetes, needed a new bathroom and a closet rebuilt while remodeling for handicap accessibility. 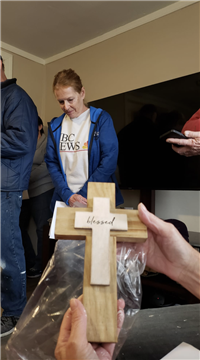 With the completion of this work, a House Dedication was held with staff and workers in attendance as he was gifted with a Bible, a wooden cross embellished with "BLESSED," a knit Afghan, and a knotted prayer lap blanket to cover his legs. Each knot in the blanket represented a prayer as someone had blessed the blanket during the making.

The group worshiped at University UMC, which had been severely destroyed, but now housing Amish workers in an upstairs "Dorm."  The Amish group's invitation to a Gumbo dinner and hospitality was enjoyed. On a very cold, blustery day, we went to the Gulf of Mexico to walk the beach and do some shelling.  Many homes with blue tarps were seen along with our outing with destroyed homes, boarded up as uninhabitable.

The opportunity to serve and give back is the reward we experienced! We pray our presence provided hope for those affected by the disasters!

Help is needed in this area of Louisiana. Individuals or groups who feel called to serve may contact Katherine Howell at khowell@la-umc.org, 712 830 4261.