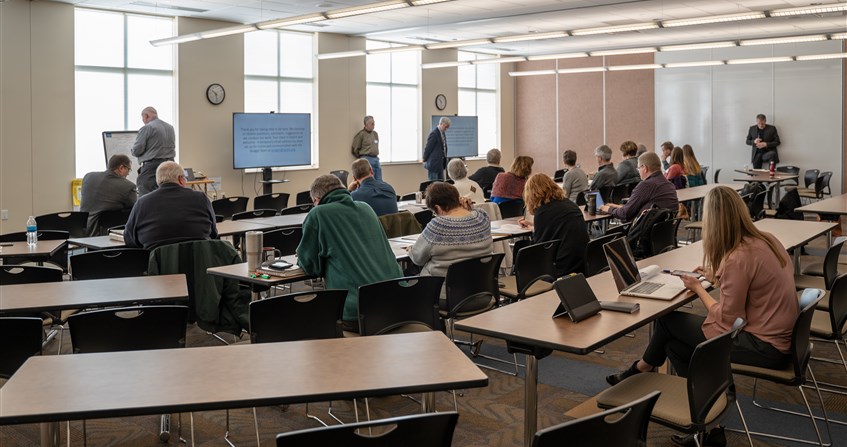 December 11, 2018
share
Iowa Conference boards and agencies had the opportunity to come and offer suggestions to the Budget Review Team on the newly released recommendations to cut approximately $1.3 million from the 2020 budget. About 16 members from various boards and agencies came to the Conference Office for the discussion."

"We've been entrusted by Jesus with a mission to make disciples throughout the world," said Rev. Bill Poland, chairperson of the Budget Team, "so that we - us, in our congregations, and around the world, can reflect the reality of God's reign."  "Sometimes we confine our understanding of resources just to the financial ones that we have as a conference through our apportionments," he added.

"Right now we're being asked to cut the funding of some very very dear and important ministries...It's more than the cutting of our budget," Poland continued.  "How can we shape our budget so that we're facilitating those things happening on the local level...because that's the primary place where disciples are made," he asked.

The recommendations of the Budget Team include reducing the number of district offices and district administrative assistants from eight to four; ending support of the Iowa Religious Media Association; and cutting the Board of Higher Education and Campus Ministry (BHECM) budget from about $540,000 to $44,000.

The most well-represented agency during the meeting was BHECM, who raised many questions and concerns to the group.

“How is what wasn’t cut related more to the strategic priorities than what was?” said Rev. Mara Bailey, Simpson College Chaplain. “In my work and my estimation, a lot of what we are cutting significantly is how we are living out our strategic priorities.”

“It was more than just budget cuts," said Poland. "We’ve already noted that there are places in immediate proximity to young adults that are not actively engaging in ministry with them. Missionally, according to the Strategic Priorities, we have to get better at that. We really believe that the partnership between our student ministries with local ministries can improve that.”  The suggestion from the Budget Review Team was looking at how churches in the same communities as the Wesley Foundations and United Methodist Colleges are interacting with each other.
The three strategic priorities, adopted at the 2013 Iowa Annual Conference Session, are creating world-transforming communities of faith; equipping ourselves and others as transformational leaders; and directing our resources to our common goals.
Other suggestions that were raised during the meeting included not paying 100 percent of our General Conference Apportionments but instead paying them at the level received by Annual Conference receipts, and working with churches who are not currently paying 100 percent to increase their wider mission giving.

“I don’t know that it’s really fair for all of this cutting and suffering to result when people haven’t been held accountable to promises that they’ve made to this connectional system,” Bailey said. “Because of that, our connectional system is suffering. Without the financial means, I don’t see the connection.”

“There are efforts done by district superintendents to address apportionments and there’s a wide variety of reasons why the giving is limited,” Poland said. Further, he wondered aloud about the potential inconsistency of not supporting 100 percent of General Church apportionments in the annual conference budget while at the same time advising local churches that they do need to fully support United Methodist missions and ministries.