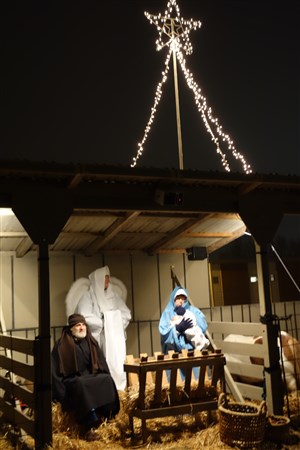 Since St. Francis of Assisi first displayed a Nativity scene, or crèche, in 1223, these depictions of the Christmas story have been a popular part of the Advent season across the world. United Methodist churches in Iowa have gladly been a part of that tradition for years, often making it an annual tradition.

Calvary United Methodist Church in Ames has hosted it annual living Nativity scene for more than a decade, said church member Dennis Toft, who has been involved with the program for 10 years.

“Pastor Lynn Elrod came up with the idea and promoted it,” said Toft. “He and a family in the church supported that and built the barn with wood from a farm in Prairie City.”

The annual display includes church members who sign up for 30-minute shifts to play the roles of Joseph, Mary, shepherds and wise men; a manger, a large barn structure and live animals. Inside the church, several volunteers prepare a hot meal for the actors for between their shifts. Women from the church sewed the costumes and continue upkeep on the costumes.

The scene is set up in front of the church so families and visitors can drive past or park to come visit the animals and actors. When all is said and done, anywhere from 20 to 40 volunteers help pull off the annual event said current Pastor Steve Campbell.

After Elrod left Calvary in 2008, the Rev. Dr. Emmanuel Dass took the reigns and continued the annual tradition, while overseeing updates to create a more fulfilling experience.

In 2011, Toft and other church members redesigned the barn. The original barn was very large and extremely heavy, making storage and set up difficult. Toft drafted the design of the barn and utilized the original lumber. The barn could now be set up by only two people in less than two hours. 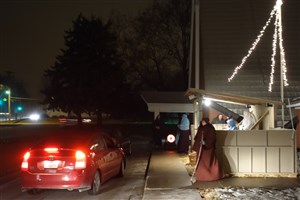 “We saw a need and it made the process much easier, “ said Toft. “It helps so we can focus on our efforts on other planning.”

Dass and Toft oversaw an addition to the actual portrayal of the Nativity. Church members and Nativity actors Gary and Jami Mirka thought to read the Christmas story from the Gospels as people stopped by.

“It helped enrich the experience,” said Dass. “Not only were people seeing the story in flesh and blood, but they are hearing it as well from the Gospel.”

Toft said he and volunteers are always thinking of new ways to add to the experience. Toft said he’s thought about using some kind of animatronics in addition to the live animals and volunteers.

“I haven’t done anything with the idea yet, but there are always ways we can improve the event,” he said.


Connecting with the community

“The tradition is a good way to connect with the community,” said Dass. “People really enjoy coming out there to see it.”

This year, due to bad weather, between 40 and 60 attended. Last year, though, on Friday night, 70 people visited and 100 people came the following night.

“The scene is a very deeply moving experience,” said Campbell, who has not participated in a live Nativity before coming to Calvary. “The meaning of the Incarnation comes to life.”

Just like St. Francis hoped to bring the true meaning of Christmas to followers, so do modern day churches. Through the years, the members of Calvary have seen the way community members have connected with the spirit of Christmas.

One year, a woman was brought to tears as she looked on the scene. She then prayed together with church members. Another year, a woman asked what the church was doing. She left, but shortly came back with a van full of people wanting to make donations.

For the members of Calvary, though, it isn’t about receiving donations or what they can get in return, it’s about giving back to their community.

“We want to keep the money out of it,” said Toft. “It’s our gift to the community.”