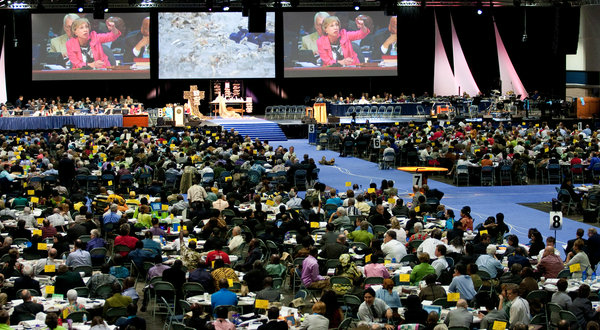 February 03, 2016
share
“When I submitted my name, I wasn’t at all confident that it was even really a possibility. That’s why I think I was a little bit surprised when I wound up being selected at Annual Conference last year,” says John Rothlisberger, a first-time lay delegate from Iowa to the 2016 General Conference. “But I came to realize maybe there is a reason for me to do it.”

Click here to listen to the conversation with John

John, a Dean at the School for Lay Ministry at Simpson College, realized that the experience of attending General Conference as a delegate was one that he could eventually share with his students, a thought that spurred him to actually put in his credentials. The fact that he ended up being selected has him feeling both honored and humbled.

There are a total of 12 delegates in John’s group, which has met together on a few occasions and will meet several more times before the Conference. “A lot of it has been conversation. The last session centered on Jurisdictional and preparing for the nomination process for candidates to become Bishop,” says John. “Prior to that, we didn’t have any materials to look at or process at all as a group at any of the meetings, so it was more just that getting to know people.”

Being new to the process, John acknowledges he still has a lot to learn, which is why it is helpful to have some people on the delegation who have done this before. “Being an educator, I learn as much from other people as I do teaching. So that’s what I’ve drawn from the experienced people is just being able to sit there and listen carefully to what they’re saying and what their experience has been.”

So that it is easier for the delegation to tackle everything that will be covered at General Conference, each of the delegates is assigned to a particular legislative committee, and John’s is Church and Society 2. “The sheer volume of material from what I’ve been told is so large that you do have to kind of pool your efforts to be able to share the key points that are coming up within the materials. I’ve started reading some of it, looking at it, trying to understand better. Church and Society 2 has some pretty heavy-hitting topics, and that’s going to be an interesting piece for me to get that material and focus specifically on that.”

The heavy-hitting topics he mentions include Family, Marriage, Divorce, Single Persons, Women & Men, Human Sexuality, Family Violence and Abuse, Sexual Abuse, Abortion, Dying, Adoption, and Suicide. With such important and sometimes divisive subjects to discuss, the group will have its work cut out for it.

“There’s diversity within that group,” emphasizes John. “And that is not a negative. It’s just you have to be able to listen very carefully to the conversation and understand the question being asked and think about the responses that are being shared. And sometimes that’s a bit of a challenge.”
But he is confident that his background will serve him well. “I have been known throughout my professional career as a mediator, a moderator, somebody who builds consensus. I do a lot of that. My orientation is to try to help listen to the voices of people. And there will always be differences. It’s trying to bring people together, to some common ground, as much as is possible.”

Though there are surely challenges ahead for his delegation, John has a lot to look forward to, particularly “being able to truly feel God’s presence and the Holy Spirit opening me, making me recognize and listen carefully to the guidance. That’s what I’m hoping for. And I believe it can happen. I don’t really have a doubt about that. It’s just putting my attention to it and making sure that’s where my focus is.”