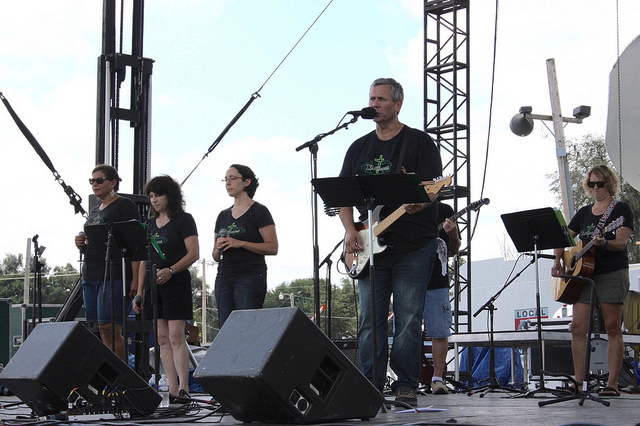 August 24, 2016
share
“This is our third year playing here,” says Greg Brown, founder and leader of the band Christian Chaos, following their gig at the Iowa State Fair on August 17. “We’ve put together a set list that’s really geared more towards this type of a venue than what we would do at a fundraiser or at a youth rally or something like that.”

The members of Christian Chaos all belong to the First United Methodist Church in Tipton, Iowa. “I started the band about 10 years ago, and I’ve had a lot of people come and go depending on schedules,” Brown explains. “We’ve got a couple folks that are retired and semi-retired. We’ve got one music teacher. We’ve got a doctoral candidate in music at the University of Iowa.” They’ve had a number of high school students over the years as well, though they have a knack for going off to college, so there’s only one student with the band currently.

The group’s creative name has some basis in reality. “If you would have sat in on the first rehearsal or two rehearsals, or even last week, you would have noticed that chaos is definitely part of who we are,” Brown assures. “We’re all, for the most part, a bunch of amateurs and we do the best we can, but there’s always something that goes wrong or gets all messed up. So there is usually some chaos at some point in time during the show.”

Click to see photos from the band playing at the Fair

Amateurs or not, Christian Chaos must be doing something right, because they get plenty of gigs. “We’ve been playing in-gathering down at Mt. Pleasant every year for probably six or seven years. We’ve played fundraisers quite a few times in the Tipton area. We played a youth rally at Camp Courageous one year, so we’re all over the place.”

Brown’s personal fulfillment in playing with the group comes largely from the messages that they are able to get across through music. “I take a lot of peace and comfort in the words to the songs,” he says. “And the songs that we choose to play not only have to be something that we all can play, but also something that resonates within each of us, or at least most of us within the band.”

He’s glad for the opportunity to play at a venue like the State Fair, where Christian Chaos can introduce many people to Christian rock music, a genre that he feels is overlooked. “If people stop for a couple of minutes and listen to the lyrics, I think they’ll find that the lyrics talk about not only who Jesus is and what his message is, but they can also provide a lot of inner peace and comfort, knowing that other people have struggled the same as you over the years and have overcome that struggle.”