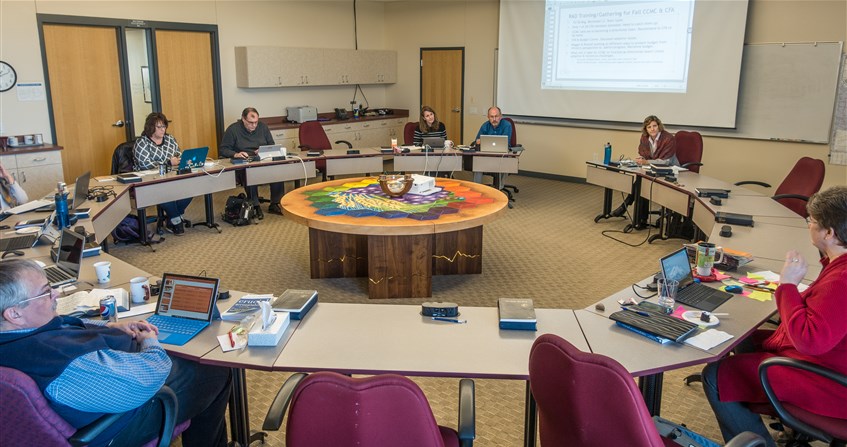 January 02, 2018
share
For two years, the Iowa Conference has been taking part in the Healthy Conference Initiative process with the coaching guidance of Greg Survant and Christin Nevins from Spiritual Leadership Incorporated (SLI). It is now a critical juncture in the process, as the coaches lessen their roles and the teams that they have been working with are charged with stepping up to the plate.

“Iowa was very astute in recognizing that the problems facing the conference and all the churches is what’s known as an adaptive problem,” explains Greg. “Basically, there is no known path, there is no known set of steps to follow from A to B to get to where you want to be – to a healthier conference.” To tackle that adaptive challenge, the Iowa Conference sought the help of SLI, which has worked with some two dozen conferences on similar problems. Click to listen to the conversation with Greg Survant and Christin Nevins From the very beginning, Greg and Christin were impressed with the conference’s clarity on its problems and priorities, as well as with the caliber of its leadership, who were “all in” right away. “We didn’t have to overcome a lot of resistance. It was really just fertile ground to jump in and start saying ‘What do we do to keep moving things forward?’ That really made the work move quickly. And we saw a willingness to jump in, roll up your sleeves, and try things and learn,” says Christin.

Solving adaptive problems can be particularly challenging when groups are too bound by traditions or fears. “It really forces you to rethink your values, rethink who you are, how you think about this role of ministry in today’s world. We all have a memory, an image of the past, and we also know that that past is no longer here yet. How do you break out of that?” asks Greg. “I think this team has a willingness to tackle those things.”

Reflecting on the experience

As Christin puts it, “There’s an honoring of the past, but we’re not paralyzed by nostalgia, and I think that’s a big difference.”

In thinking about highlights during their two years working with the Iowa Annual Conference, Christin notes how the teams remained focused on their goals even during major events like the bishop transition. “That speaks to the health of the teams and the health of the conference, that that transition could happen, in the midst of General Conference. All kinds of really disruptive and significant events happening, and the teams really just didn’t skip a beat. That was a huge highlight. I think the other is seeing all of the district operational teams launch,” she adds. “Every district superintendent found amazing team members and jumped in and got it going.”

A moment that sticks in Greg’s mind is when they were working with a group of at least 50 people together on a vision and mission statement. “That was really the presence of the holy spirit,” he marvels. “In a two hour period, the team crafted a vision and mission statement that was subsequently adopted at the Annual Conference. Many people look back and say ‘That was an amazing day.’”
Greg and Christin always find there is much to discover when they work with a new group. “We learn in every single group we go to, and the beauty of that is that allows us to share from one group we work with to the next. We brought some new learnings to Iowa that came from the other groups, and we’re taking learnings from Iowa to other groups,” says Greg.
They also say they grow and benefit personally. “Seeing the commitment to spiritual formation, but also leadership in action with all the teams we’ve worked with keeps pushing me to say how can I grow spiritually?” says Christin. “How can I be more disciplined, more consistent in my own leadership, my own communication? Because it’s so essential and wherever we are, to always be doing better.”

As for the Iowa Conference’s next steps, Greg feels it is crucial that they not forget the principles that have been instilled over these past couple years, and for these principles to spread throughout the conference. “If the people in the pulpit and the pews don’t change, then this is all for naught. The challenge now becomes what I call ‘deeper and wider.’ As we phase out to a lesser visible role, then more of that ownership has to be taken on by the groups we worked with. We’re at a very critical transition point. It would be very easy to let the old habits creep back in,” he says. “That, we have to avoid. And I’m fully confident that Iowa can do that.”

Christin assures that they have been preparing for this transition. “We have been working with the teams to have them take more and more ownership of facilitation while we are still here. So we have seen the capacity to lead and manage as this process grows, and we are still going to be in the wings coaching those who are facilitating the meetings. We can move into this space because we have confidence in the leaders to keep moving forward with this. And there will be a connection, relationship, support, accountability—all those things will be taking place,” she says.

“We’re very encouraged and very hopeful and feel like we’re leaving this process in good hands, and that there is momentum and commitment to go forward,” concludes Christin. “We want to bless that and celebrate it, and celebrate every step of the journey.”