Coming alongside others in care

On Thursday afternoon, July 19, when an F3 tornado roared through Marshalltown, the United Methodist Women here at Marshalltown Hope were putting the final touches on their annual fundraiser — a rummage sale set to open the next day. As our church had suffered no damage because of the storm, the women went ahead and opened the doors on Friday. However, as the reports began to roll in that morning about the extent of the tornado damage, our rummage sale quickly morphed into a “giveaway sale.”

Later, when I was contacted by the United Way and asked if our church would be willing to serve as a Red Cross Distribution Center, I immediately said yes. However, after ending the call I did have that nagging thought that maybe I should have checked with the leadership of the church before making that decision. I wasn’t sure how to break the news to those managing the “giveaway sale” that we were going to be doing this for the long haul.

I said, “I have something I need to ask you – I just had this call from the United Way,” and the women interrupted me and said the United Way had called the church first and they had already said yes! 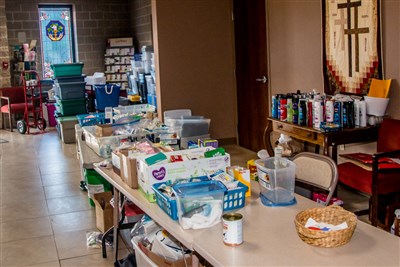 Poet T.S. Eliot once said, “If you aren’t in over your head, how do you know how tall you are?” In choosing to serve as a distribution center, we were way over our heads; but through this process, we discovered that we were taller than we realized as we served as one example of God’s love for our community. Trust me, those glimpses of God’s love have been so evident throughout the tornado recovery efforts.

The learning curve for serving as a distribution center was steep and it was a rather “baptism by fire” experience. The United Way put out a plea for clothing; and before we knew it, our fellowship hall, our front foyer and our main hallway were filled with garbage bags and boxes filled with clothes.  We asked for cleaning (flood) buckets, other cleaning supplies and plastic totes; and the response was absolutely amazing. Soon donations were spilling into the back of our sanctuary and into many of our meeting rooms. We asked for bedding, towels and toiletries, and the donations just poured in.

The response from churches, organizations, businesses, and individuals was incredible. People were so generous! Thanks so much!

As quickly as the donations came in, they went out. The need was so great. There were so many people in our community whose homes were filled with tornado debris and glass from broken windows. Their homes’ interior walls and floors were covered with dirt and grime. Early in the process, we recognized that language was a barrier to helping many of the people coming through our doors. So we partnered with high school students, who served as translators — speaking Spanish and the different dialects of the refugees from Burma. These same students translated all our signage into the different languages, too. In that way, we were able to offer hospitality and connect with people in a more meaningful way.

You never know how a church will respond to having their church look like a “garage sale on steroids” for weeks on end  Even small changes to the normal routine can be difficult and these were major, but the members of Hope UMC were remarkable. They easily put up with the chaos because they saw the need and wanted to help.

So many from the congregation, other congregations, and the community willingly gave of their time. Even people who dropped off donations sometimes stayed and helped out for an hour or two. We had individuals who volunteered to organize the center; others helped to sort and fold clothes; others prayed for the people affected; while others played with and read stories to the children as their guardians shopped; still others helped unload some of the larger truck-load donations; and there were those with trucks who helped deliver donated furniture to those in need. People helped in whatever way they could.

For now, we have closed our doors, things have returned to business as usual, but then again not. We are not the same faith community as we were before we started this — lives have been transformed. I have seen individuals from our church holding the hands and comforting families who have lost everything. I have seen so many tears shared. I have seen the barriers people can erect breaking down. I have witnessed how love and care can be expressed even when individuals do not speak the same language — and probably the most powerful to me was how volunteers would drop everything to listen to the stories, the frustrations, and the worries of the people whose lives were in upheaval.

In short, I have seen the Spirit of Christ in action in powerful ways through our work as a distribution center. As a congregation and as a community, we have been stretched in new ways. Many, upon hearing these painful stories of struggle, have been challenged to grow in their faith and in what it means to come alongside others in care.

As I reflect on this experience, words from the Apostle Paul come to mind. “Above all, clothe yourselves with love, which binds everything together in perfect harmony. And let the peace of Christ rule in your hearts, to which indeed you were called in the one body. And be thankful.”  (Colossians 3:14-15, NRSV).