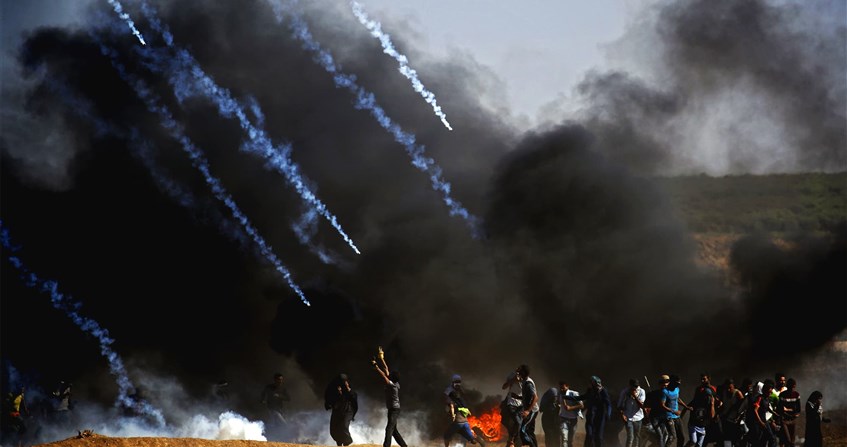 (This letter is from Rev. Susan Henry-Crowe, General Secretary of the General Board of Church and Society)

This week, we grieve the fear, horror, terror, violence, bloodshed, and death of children, youth, women, and men in Gaza. Israeli forces killed 59 Palestinians, most by gunfire, and injured more than 2,700 on Monday, Gaza Health Ministry said. (US News)

I have led many groups of Christian, Muslim and Jewish students, faculty members and staff to Israel, the West Bank and Jordan. We listened to and learned much from the people of the region: Israelis, Palestinians, Bedouin, Iraqis, Jordanians – many living in the diaspora – about the root causes of violence. The effects of such conflict are profound.

Safety, freedom, education, healthcare, economic health, family life are deeply compromised. All people hope for a world that is not only free from violence and conflict but yearn for a world of joy, safety, security, wonder, and freedom. There are many histories, geopolitical realities, socio-economic constructs, other national and international interests, militarization, money, and greed that feed these conflicts.

Many in the U.S. and around the world continue to invest in, intervene in, profit from the affairs that continue to create occupation, violence, bloodshed, conflict, and war.

As United Methodist Christians we have a vocation – a calling – to invest in, take responsibility for, intervene in the things that make for peace- wherever we call home and around the world.

Each summer, I have the privilege of speaking to Israeli, Palestinian and US young people who are living and traveling together for peace. Kids4Peace is a faith-based organization that connects all of Jerusalem: Israeli, Palestinian, Christian, Muslim, Jewish – across over 40 neighborhoods and schools. Two of their objectives are:

It is my prayer that we take inspiration from these young people. Our moral commitments, our national resources, our faith-filled prayers, our actions must live out our faith always seeking the ways of peace.

They have treated the wound of my people carelessly, saying, "peace, peace" when there is no peace. (Jeremiah 6:14)

"The United Methodist Church opposed continued military occupation of the West Bank, Gaza, and East Jerusalem, the confiscation of Palestinian land and water resources, the destruction of Palestinian homes, the continued building of illegal Jewish settlements, and any vision of a "Greater Israel" that includes the occupied territories and the whole of Jerusalem and its surroundings.  In our call for an end to the Israeli occupation, we affirm the church's commitment to nonviolent responses to the Israeli-Palestinian conflict and acknowledge the need to hear the voices of all those - Muslim, Christian, and Jewish - harmed by the conflict, including Palestinian Christians..." (2016 Book of Resolutions, #6111)