Conference Directors dream of what God has in store for us 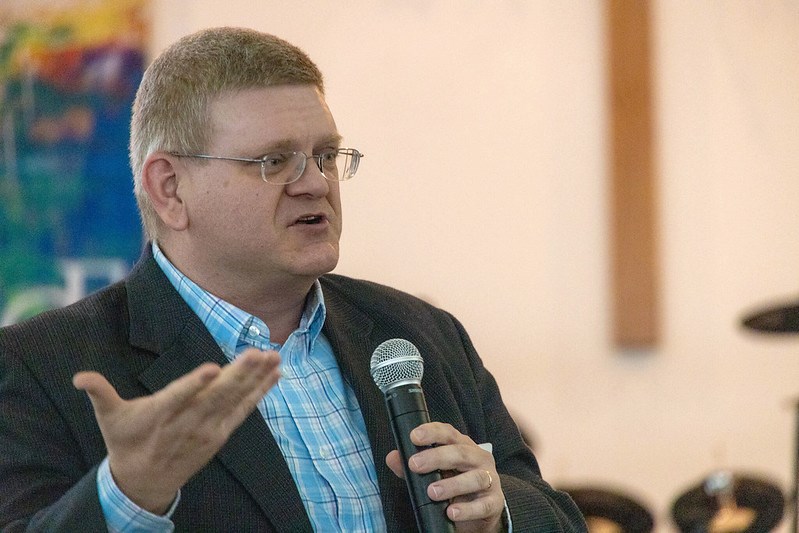 The term “director” can have a kind of dry, formal feel to it that sounds distinctly administrative and maybe even a little distant. But to hear three Iowa Conference directors describe their calling at a recent conference gathering, you can sense the excitement and passion they have for what they do. So what are their roles, and what has inspired them in their work?

Rev. Dr. Jaye Johnson, who serves at Director of Congregational Excellence, was a beneficiary of the passion of one of his teachers back in seminary, Dr. Elizabeth Platt, who had a tendency to—even in her 70s—jump up on her desk to teach the Old Testament. “Here we were in one of our first classes, and people had given up jobs and careers and moved across the country in a lot of cases,” recalls Rev. Johnson. “And we weren’t sure we were in the right place.” But Dr. Platt shared with them one of her favorite pieces of scripture, Jeremiah 29:11. ‘Surely I know the plans for you, says the Lord. Plans for your welfare, not for your harm, plans to give you a future filled with hope.’ “That was Dr. Platt was telling us that we were in the right place,” he says.

“She later told us the word for plans in Hebrew can also be translated as dreams. ‘Surely I know the dreams I have for you, says the Lord.’ The three of us as directors in the Iowa Annual Conference have the privilege and the honor of dreaming along with you and other leaders what God has in store for us.”

Rev. Johnson’s role is to look at revitalization. “The purpose of our office is to make God’s hope for the world real by preparing churches to multiply. What we mean by multiply is reach new people, reach more people for Christ.” That is done through four major strategies, which include congregational assessments, coaching, training for intentional interim pastors, and conflict transformation.

That last one is especially interesting. Explaining that conflict is simply the presence of two or more ideas occupying the same space, Rev. Johnson says, “When we work with churches and they say they don’t like conflict, what they mean is ‘we don’t handle conflict well’. You see, every church has to have some level of conflict because if you don’t have some level of conflict, you’re not doing anything worth being conflicted about. And apathy is a bigger problem for our church than conflict.”

“Now how you choose to handle that conflict can be positive or negative, good or bad,” continues Rev. Johnson. “But the conflict itself is necessary and needed, and so we have been working with the conflict transformation folks to begin a training process to work with churches.”

Rev. Johnson thinks of his role and Rev. Bill Poland’s role as Director of New Communities of Faith as two sides of the same coin. “We prepare churches to multiply,” says Rev. Johnson, “and Bill takes them to that next step as we begin new ministries.”

Rev. Poland, who has been in this position for almost a year now, considers it a privilege to work with pastors and leaders to help develop new communities of faith. “That ranges from helping a congregation to develop a new worship service for new people, to working with something called ‘faith expressions,’ which are fresh expressions of church for today’s culture,” he says. 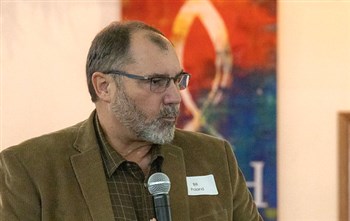 These new expressions are important because a large percentage of the population today is skeptical of church and unwilling to attend a traditional service. “We have to figure out a way to take faith, change the understanding that our goal is to get people into church and turn that around so we realize our new goal is to get Christ into people,” he explains.

Church plants have been a popular way of starting new faith communities in the past. Rev. Poland used to be involved in many of these which they referred to as “parachute drops,” where they are dropped into a new location and tried to start up a church from scratch. Though he describes it as an interesting experience, he notes that these endeavors have shown to have an 84% failure rate, which has led to concentrating on new strategies.

A recent success has been the French Ministry of Sioux City, one of the first projects he got involved within his new role. Shortly before he began the position, he was at a clergy retreat, when the pastor of Le Mars UMC approached him. “Michel Lundula and his spouse came up to me and they said, ‘You know, we think God has put a dream upon our hearts. And that dream is to have a French-African service’.” When Rev. Poland subsequently took on the director role and was visiting the Northwest district, he sat down with Rev. Lundula and Rev. Roger Madden of First UMC, and a collaboration was born.

For several months, the chapel at First UMC served as the meeting place for the newborn French Ministry, and now—in just a year—it has grown so large that they meet in the sanctuary. This vibrant congregation already has over 100 members, has celebrated 11 baptisms and two weddings and is launching a second site in Le Mars.

“Because enough people have come together, there is enough buzz throughout the community that people in outlying areas of the community have now come together in Le Mars for worshipping community as well. The best thing of all, they’ve already sent their first person into licensed ministry,” says Rev. Poland.

“Sometimes in the church today we get very focused on our external and internal struggles, and we get distracted from why God called us to be the church in the first place. New ministries are a wonderful way for God to re-focus the way that we’re together.”

Lessons for military and ministry

Rev. Dr. Lanette Plambeck has been with the Iowa Conference for 24 years. Following her time as lead pastor at Broadway UMC in Council Bluffs, she’s now serving as the Director of Clergy and Leadership Excellence, a position that involves working with boards, agencies, and individuals and striving to get a sense of where the heart, mind, and spirit of the clergy is at. 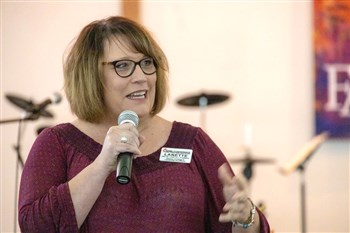 Much of what Rev. Plambeck brings to ministry began in her earlier years serving in the army (it was the GI Bill that enabled her to attend seminary). There she found out about Post-Traumatic Stress Disorder (PTSD), a condition that afflicts many soldiers—and, she has come to realize, can be seen in clergy and laity as well. In both the military and in ministry, not everyone is meant for these callings, which they usually realize in training and seminary. But for some people who are struggling, it’s just that they need the right kind of support to keep them going.

She discovered “the importance of coming alongside people we are about to lose” while in basic training. “We had people who wanted to be their very best, but they needed people around them.” She discovered that she could be an encouraging voice and help people be in the right place to succeed. This was a valuable lesson in the military and one that she now brings to her current role.

“How can we really surround our people with strategies and systems of care, encouragement, and development, so that they can be at their very best?” she asks.

“I’ve been from open country churches to county seat churches to thriving small-town churches to downtown urban ministry churches that have afforded me the opportunity to help develop others in similar positions. But I want to say what I’m really aware of is ministry can be difficult,” she admits.

“My ministry is coming alongside of folks. Not only in the good, but in the difficult seasons, so that we can thrive together to be our very best for God’s kingdom.”